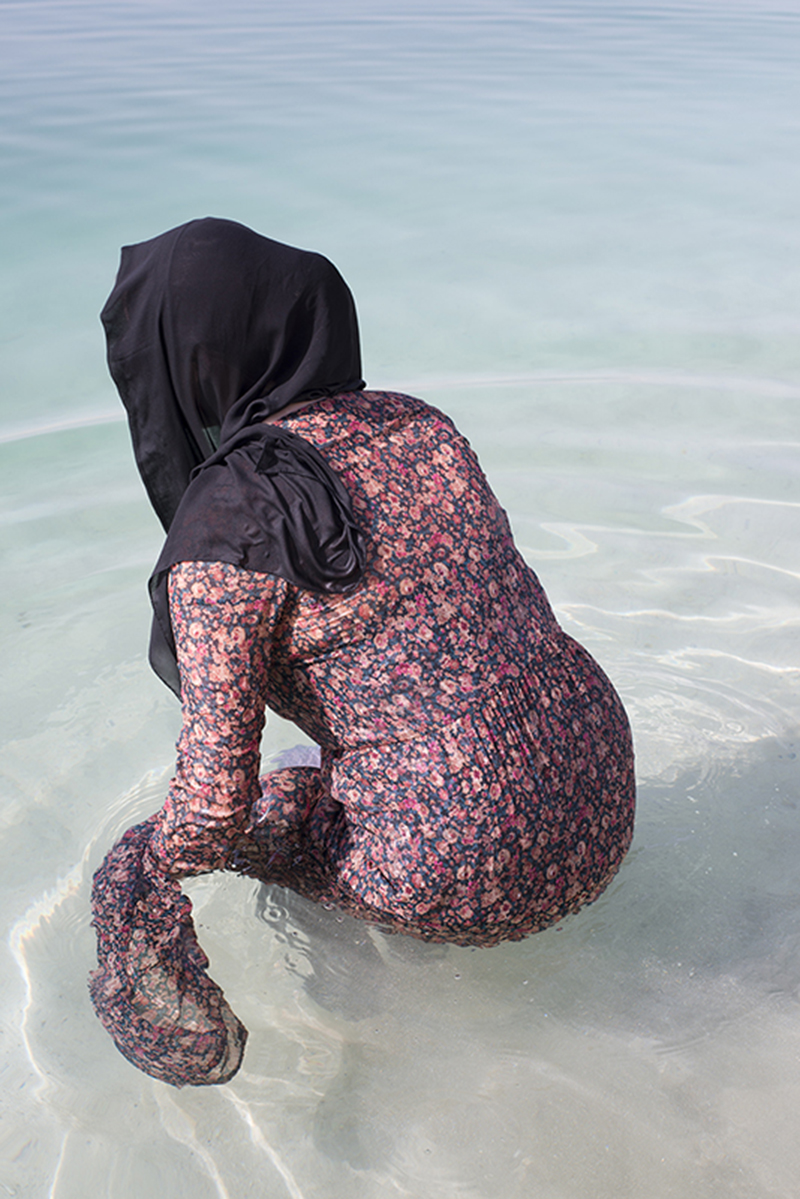 Melina Papageorgiou is not interested in whether the burkini is good or bad – she doesn’t concern herself with diametrically opposed moral judgments. She is more interested in the complexities that surround the burkini; a greater truth that lies somewhere between these polarised perspectives. Her project, Burkini, is a celebration of the attire, focusing on details to allow an appreciation of these garments in their own aesthetic terms along with the women who wear them.

Since childhood, Papageorgiou has been fascinated by water. She grew up in Greece near the sea and she was always in the water. Water is an element of expression, of freedom and of moving your bodily freely. While living in Libya as a young teen, Melina saw a Muslim woman entering the water fully-clothed for the first time. “I was fascinated,” she says. “It left a lasting impression on me, unconsciously.” Her curiosity was reawakened years later, when she saw a burkini for the first time. She is interested in the coming together of the body, the object and how the water acts as a binding agent between the two.

Papageorgiou made several trips across United Arab Emirates and in particular Abu Dhabi, photographing women in their burkinis and challenging how Muslim women are represented and the stereotypes perpetuated around the Middle East. The photobook (due to be released next year) that brings together these images was shortlisted for the Kassel Dummy Award 2016.

Burkini, a comprehensive and heterogeneous work based on several trips you made to Muslim countries, depicts women in their burkinis. The project, along with your previous series R&Me, have focused on the photograph’s approach to the human body and its juxtaposition with objects. What is it about this topic that interests you?

They are two different projects, the images in R&Me are self-portraits where I cover myself with fabric and used my bed sheets as a background, along with images from objects of memories. It’s about the interaction of the human body with the objects and the creation of unities and disconnections. Different reforms and its actual identity.

Could you talk a little bit more about Burkini and how these images were chosen; what attracted you to these women’s stories?

In Abu Dhabi the sound appears artificial, often asking myself where it comes from. There is a continuous background noise – from cars, air conditioners and construction that never changes as the day transitions to night. The images in this series – nature, people, materials, objects – was lead from my curiosity about the surroundings and how people live. When I first saw a woman bathing covered with clothes, I was confused but was also fascinated by the beauty of the female figure. That was from when I was a teenager living in Libya; I believe it was a profound moment for me. 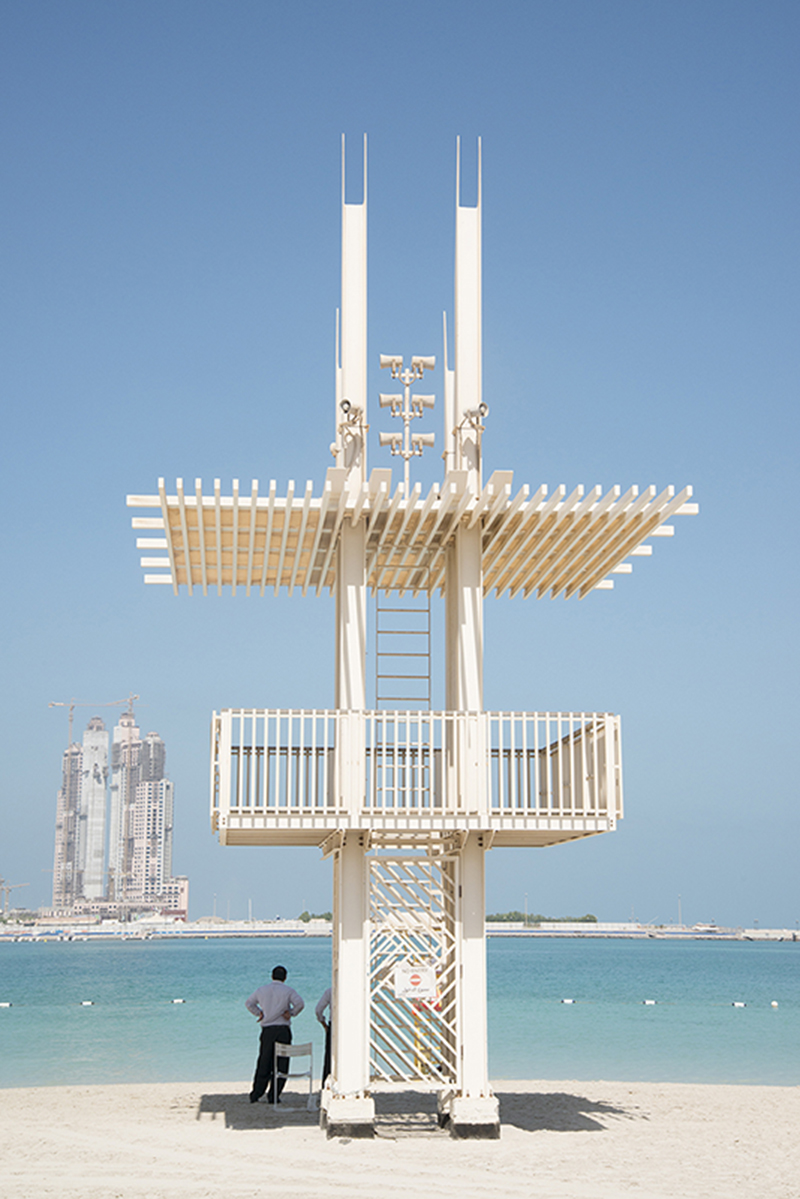 Your images leave only suggestions and are in one sense abstract. I have noticed there are no faces in your photographs of people, is it intentional?

It was important to ask each subject for their permission. They mostly wanted to stay anonymous but this worked for me too, as it allowed me to observe their shapes and colours, whilst leaving a sense of mystery. However, the younger subjects I approached were more open to show their face but then again, I decided to keep it the same with the rest images.

Did your idea of presenting what you defined as an exotic region change as the project continued?

It will always be exotic; as there is no exact right or wrong, it is the in-between truth I like to see.

I noticed there is always a pictorial approach in your photographs, an accurate and patient virtuosity in composition. Would you tell me more about your creative process, how did this project take on its final shape?

In the first place I was fascinated by the gleaming sunlight of Abu Dhabi. As well as using flash in most of the images, it was also important to get all the details in the image, more than creating an atmospheric mood. It was important for me not to show the surroundings such as too much of a subject’s personal life; I photographed close enough so that the viewer has to look for much more subtle hints, avoiding assumptions at the same time. 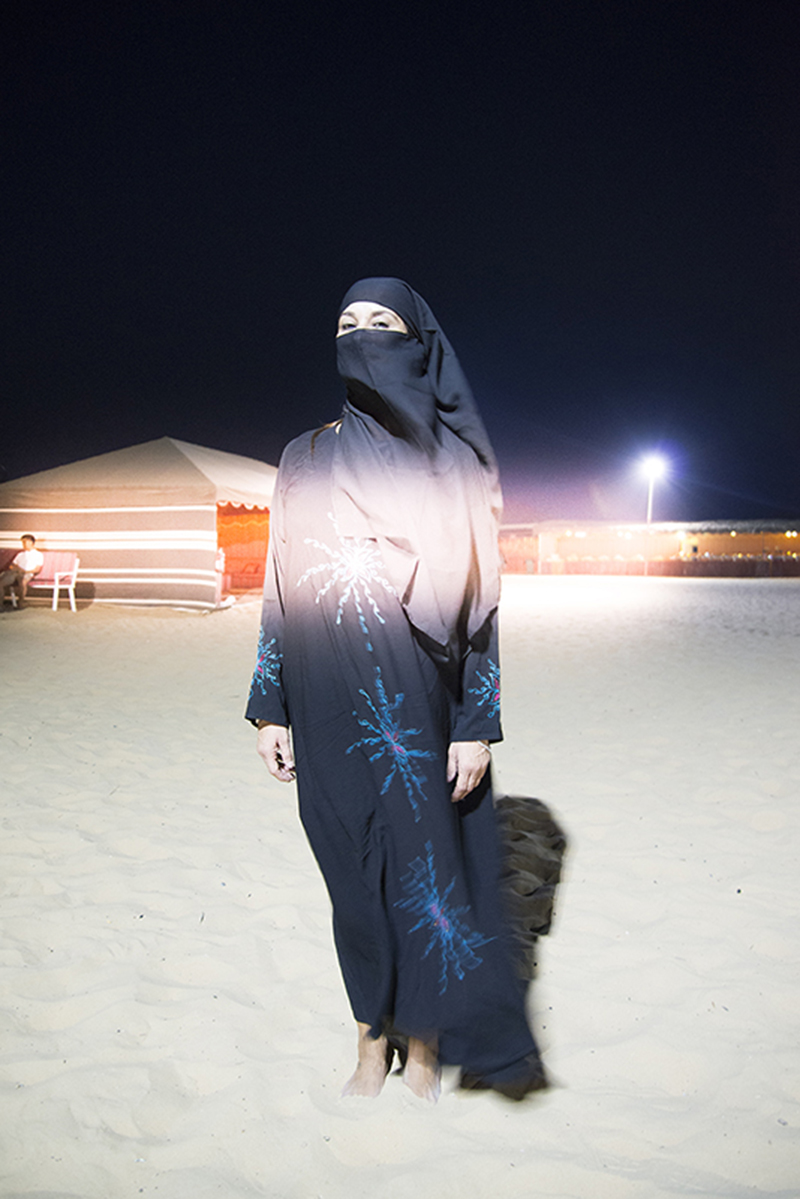 Muslim women pleat, fold, and fasten a piece of cloth over their head everyday before they go out, but the hijab and burkini means probably more to them than merely concealing their hair. In the religion of Islam, both Muslim men and women are expected to preserve their modesty, and from an Islamic point of view, the burkini contributes to the creation of a modest atmosphere. In an era where women are universally sexualised, Muslim women believe that the burkini can prevent this from happening. Is there anything that resembles this now in your eyes?

I don’t really know if I can answer that. I think they are used to dressing in that way, it’s tradition. I also see it changing slowly, becoming more western and with a more modern influence. Well, the fashion market is also working on that universally, I suppose.

What is it that attracted you to the burkini?

Curiosity to get closer to the moment when they contact the water; that specific time when they are bathing. Seeing them covered in the water, in a away the fabric transform into seeing only one shape, the body itself. It might be also that I had been practicing many years as a swimmer.

You have chosen Burkini as the title for your series that covers a wider range of scenes and aspects of life in Abu Dabi and other places all shown together as a whole. Given recent attention to that term, was that considered a provocation?

I find Burkini as a word exiting. The swimsuit itself is also just a piece of fabric, from one point of view. Now it’s everybody’s decision to give it an identity, a political name. The project is not only about burkinis but also to see an aspect of how people live there. I have been photographing during the last few years in Arab countries but the Burkini series was actually taken in Abu Dhabi.

The burkini has become perhaps the most potent symbol in France’s long-running battle over its vaunted secular identity. This summer’s heated debate over bans on the full-body swimwear by beach towns on the French Riviera has reverberated around the world, with widely different reactions. How did these events inform your treatment of this project?

In the beginning, from 2015 when I started talking about photographing woman with burkinis, I received a lot of surprising smiles, with people asking what it is. Nowadays, people tend to be more serious about it. With regards to France’s different reactions to a woman sitting on a beach with a burkini, it has more to do with law and politics.

Do you have any current projects that you are working on?

I am currently working on a book of the series that will be out 2017. 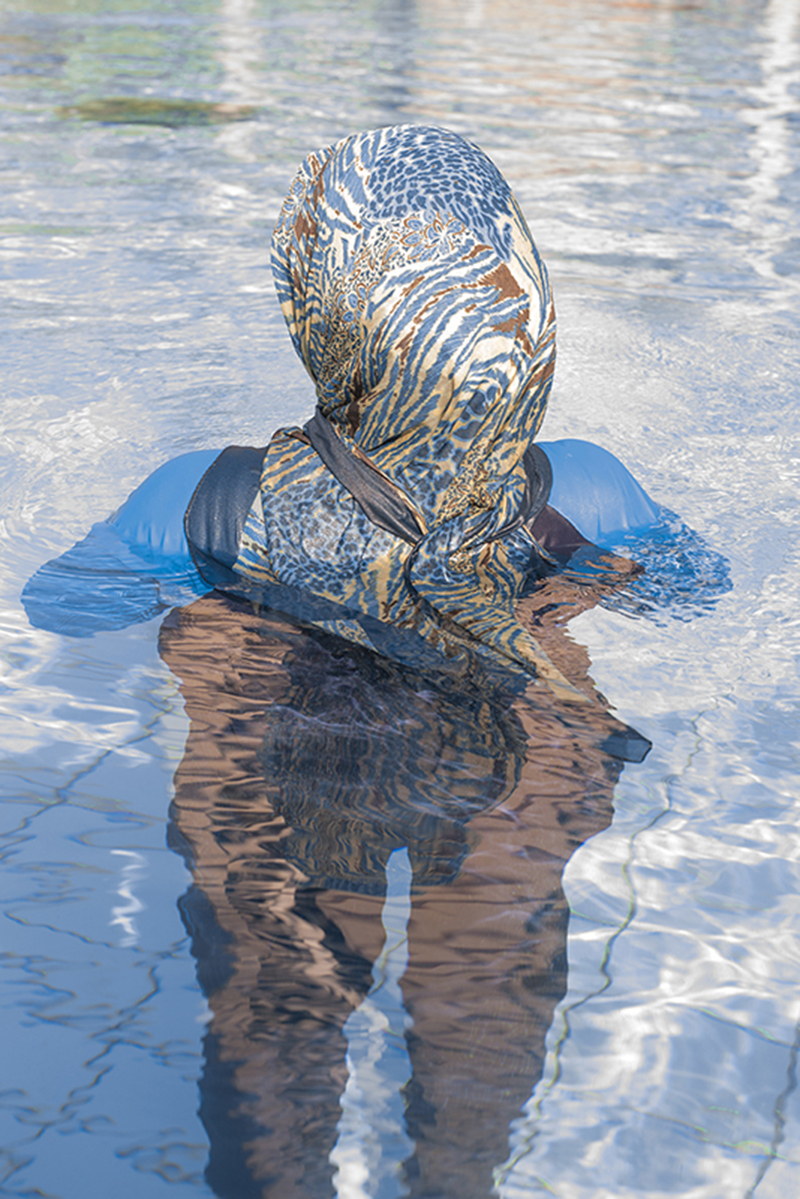 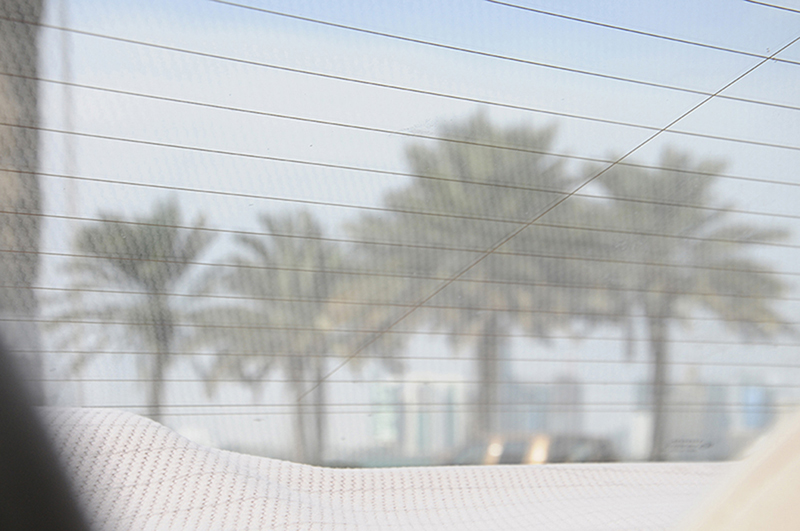 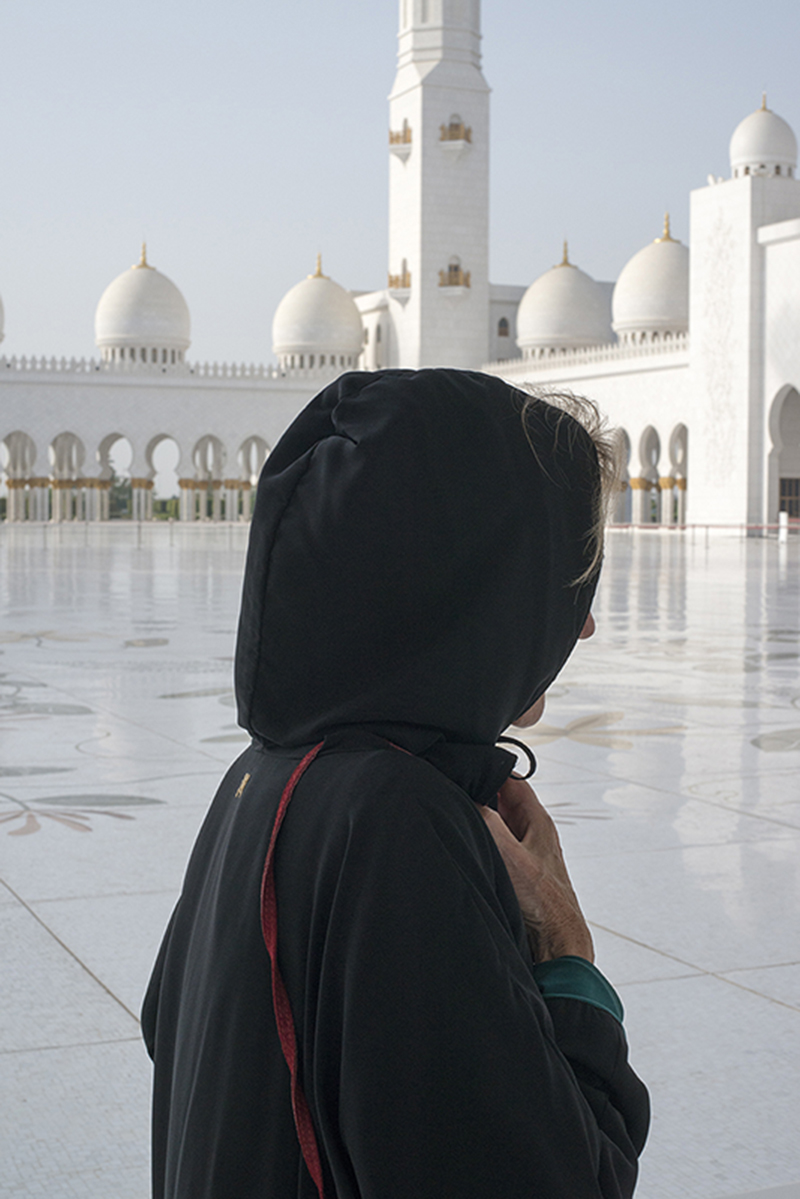 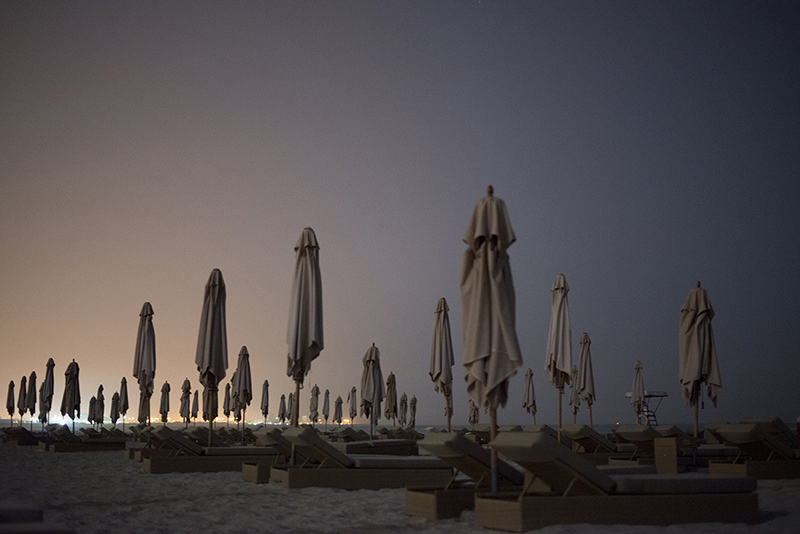