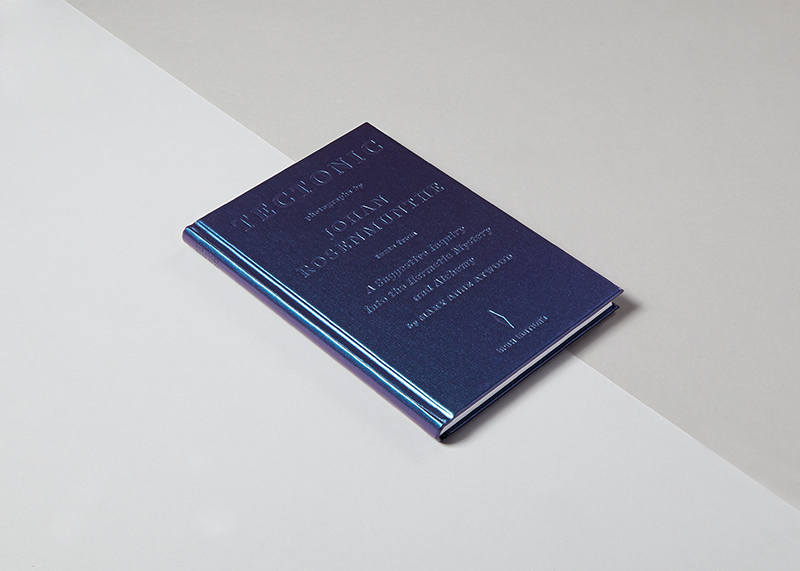 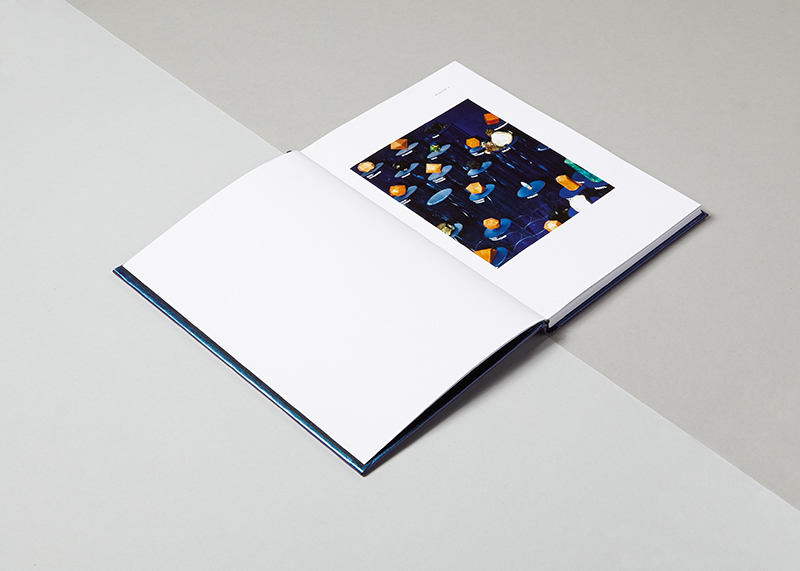 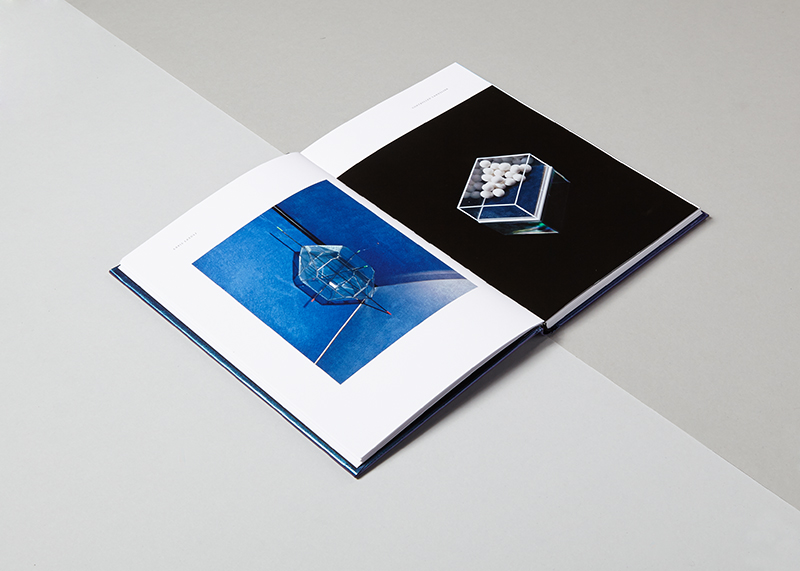 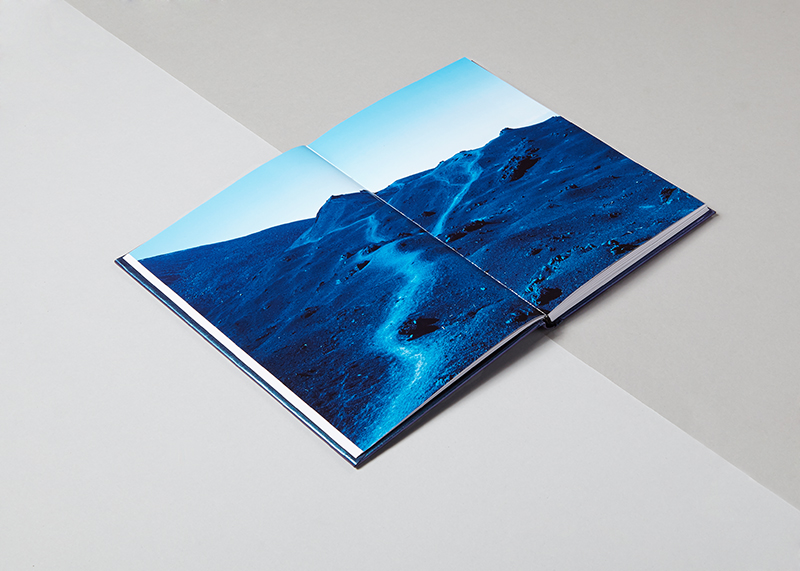 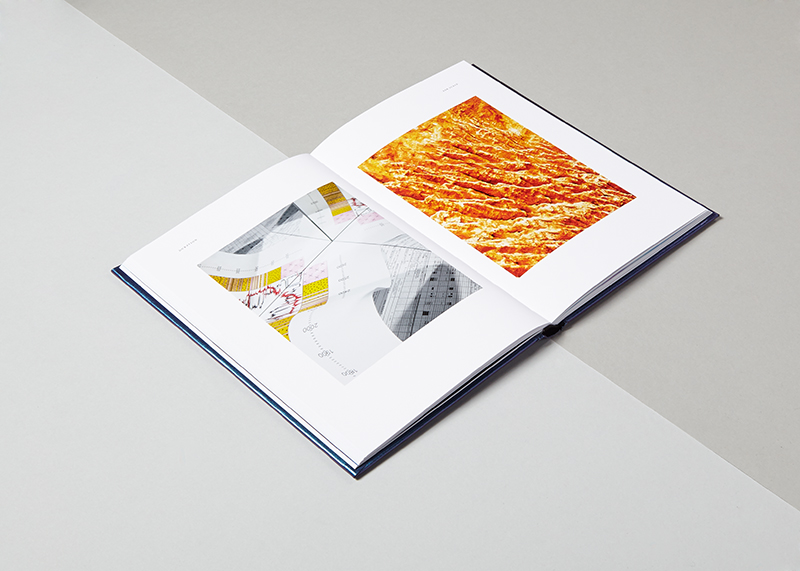 Igneous, metamorphic, sedimentary. From these three simple processes, we have granite, quartz, limestone, and coal. Crushed and layered over time, squeezed and morphed through heat and pressure, rocks bare the marks of the violent and powerful forces that shape our planet and ultimately transmute minerals into a myriad of forms. Likewise, photography has always been an alchemical process. Developed by gentleman scientists, the medium grew from a desire to fix the flickering images delivered from early optical devices, and quickly began freezing the ever-shifting world into crystalline still images that allowed prolonged study and contemplation. Seeking to extract deeper mysteries, not only within the rock’s structure, but also within their transformation into an image, Rosenmunthe’s adventurous images harken back to the inventive spirit of these early scientists and inventors. Lushly printed and opulently designed, Tectonic is both a campy exploration of the occult and a playful examination of photography’s alchemical potential.

Science can have a strange effect on art. For scientists, the inventive ruminations and misreadings of basic science by artists are no doubt amusing, if not baffling. Yet, for the uninitiated, science is often magic. Absurd as they may seem, Rosenmuthe’s images explore the longing for some deeper truth in the resolute silence of rocks and minerals. Although ironic in tone, the still-life images of Tectonic resemble a series of relentless experiments and prophetic divinations seeking to extract or divine the rock’s inner magic or secrets. While Rosenmunthe’s methods seem strange, his desire for understanding is common. Petrographic microscopes and optical minerology may tell us the detailed composition of rocks and minerals, but for many those answers simply are not enough. Deeper truths and connections are required. Even with such complicated modern instruments, it’s a small step from magic to science.

Although Rosenmunthe’s photographs take center stage, the book also interweaves text about rocks and minerals from Mary Anne Atwood’s 1850 text A Suggestive Inquiry into the Hermetic Mystery, an obscure text of hermetic philosophy and theory. Fearing the book revealed too many secrets about their beliefs, Atwood and her father destroyed most of the printed copies shortly after the book was printed. Despite their actions, copies survived and continued to influence people interested in the hermetic tradition and its teachings. A religious/philosophical tradition with roots in Late Antiquity, hermeticism purports to reveal hidden secrets present throughout history and in a variety of different traditions (Late Antiquity is a period roughly between 250 to 750 CE, and marks the period between classical antiquity and the middle ages). Wide-ranging in scope, it connects ancient scientific theories, especially those of alchemy and astrology, with religious theories and the occult. Intrigued by the hermetic belief that one could control nature, many early scientists looked to the writing of its practitioners, namely Hermes Trismegistus, the quasi-mythical character and the doctrinal founder of the movement, to understand principles and truths about the natural world.

Rosenmunthe’s work seems to fall into the long simmering genre of ‘new mysticism’ that has emerged in recent years. Embracing subjects long deemed kitsch, the genre often includes images of prisms, rainbows, candles, crystals, as well as iconography of the occult, and often aims to draw out metaphoric and quasi-spiritual meaning from photography’s material properties. This impulse toward the spiritual over the rational has always been present within the medium, and is best exemplified by someone like Minor White, who remained earnest in his attempts to draw connections between various mystical traditions and the medium. In contrast, Rosenmunthe and his contemporaries deliver their koans with a knowing wink and a smile—theirs is a performative and ironic magic. Drawing from forgotten occult manuals and outdated scientific texts, Tectonic is built upon the visual references of forgotten magic and misguided science, but reads more like esoteric camp than it does the proclamations of a visionary mystic.

The book itself is beautifully designed and lushly printed. From the iridescent blue cover to the selectively spot varnished images, Rosenmunthe and SPBH have spared no expense in producing the book, and it pays off. Like the overproduced tomes of mystics past, Tectonic seduces the viewer into contemplating the various images and diagrams, as well as their relation to the rambling text of Atwood. In keeping with the book’s themes, Rosenmunthe even offered crystal-healing ceremonies for attendees during the 2014 Unseen Festival.

If Atwood is a primary source and foil, Tectonic is an exegetical response that links Rosenmunthe’s work to a deeper tradition. Drawing out threads, ignoring others, and moving in its own direction, the work diverges enough from the esoteric text to carve its own niche. Although Rosenmunthe’s work seems to fall within an ever-growing genre of photography, it is weird enough to stake its own claim. The best images diverge from what has become a standard ‘mystical’ trope of prisms, crystals and rainbows, and reveal puzzling experiments or details as knot-like and cryptic as the accompanying text.