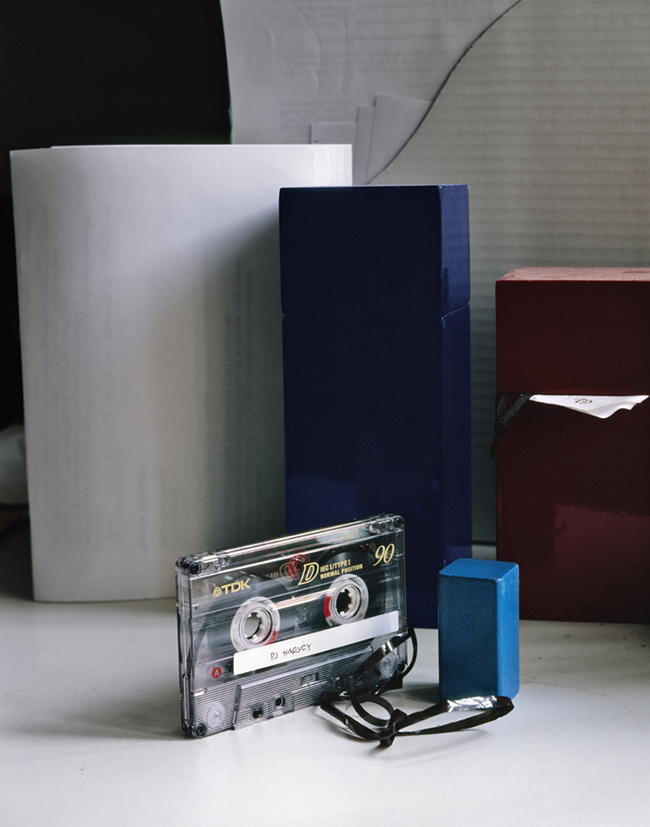 A TDK cassette with songs of PJ Harvey, 2010, Budapest 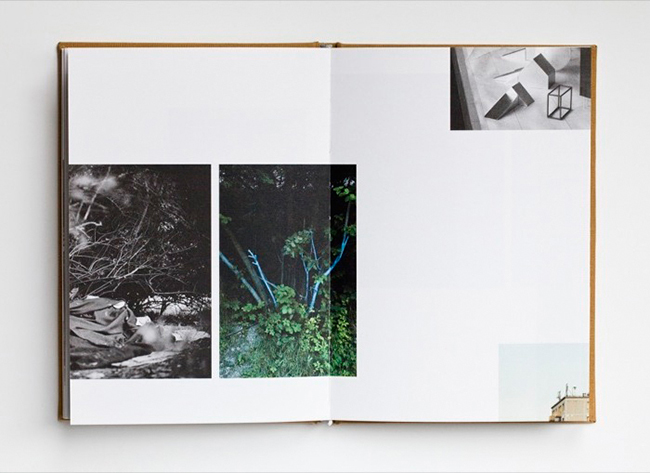 Spread from the book ‘Handbook to the Stars’, published by Stokovec – Space for Culture, Banská Stiavnica, Slovakia.
Photo: Peter Puklus

Regarding the current state of image production a paradox suggests itself: if the notion of ‘photography about photography’ has increasingly begun to appear played out critically and was, in fact, a more or less redundant position to begin with, it is also the case that we are in need of an approach to the medium that is precisely about photography – given the extent to which existing (implicitly modernist) definitions fail to account for the new energies that it is invested with. Having reached this moment of self-consciousness with regard to its own history, it seems as though photography can no longer be satisfied to accept wholly conventional strategies of image-making as embodying the fundamental qualities of the medium – or indeed, as even being what photography is in itself.

The conventions that have shaped the making of photographs can be, after a certain point, even more telling than the pictures themselves and artists are now increasingly free to borrow those forms, in effect building new visual languages from what are as much standards of visual culture as the essential values of the medium. Peter Puklus is arguably one such artist, exploring ways in which the medium can be a reflection of its own history, as well as of all those other fields it has so deeply transformed. With his series Handbook to the Stars, Puklus finds a certain measure of freedom in abandoning the familiar expectations of photography, especially the notion of a single image fitting cleanly into a linear narrative; by contrast, he favours a more impressionistic approach, where the images are clustered together into constellations, so that individual pictures constantly reference each other in a complex, unpredictable fashion across the spaces dividing them. We might understand this as a reaction to the stream of images that defines so much of how we interact with photography now, occupying multiple dimensions at once. It speaks also to the ways in which we try to order our relationship to the world around us by creating imaginary models – a handbook is, after all, a sort of guide or map.

Here Puklus is ambivalent though, as the kind of information that he presents is, at best, fragmentary; the structures we depend on to make something legible are a lot more provisional than is commonly supposed and the social order that takes for granted the stability of its privileged hold on what can be known is often subjected to deep, irreversible breaks, leaving behind the orphaned traces of those old certainties. In Puklus’s work what follows from this episodic sense of cultural history is a collection of improvised, often sculptural interventions, where the futuristic presses up again the banal, amounting to a sort of catalogue for discarded modernist forms; the utopia of art and life that such innovations once promised are rendered here as so much junkyard imitation. Given the openness of his approach, however, he does not restrict himself to constructed images, so relatively descriptive works stand uneasily next to those that are somewhat less than straightforward (see, for example, his striking use of negative prints). Apparently stripped of their context and floating within these new relations that he has created, the images take on a wholly new narrative potential, one which does not always exist within them individually. The point is surely that both our cultural landscape and the human mind itself are machines for making connections between disparate phenomena, which is precisely what the world consists of; the way we structure this varied information allows us to make sense of it, even if that must still be understood as a fiction created by the necessity of finding patterns. 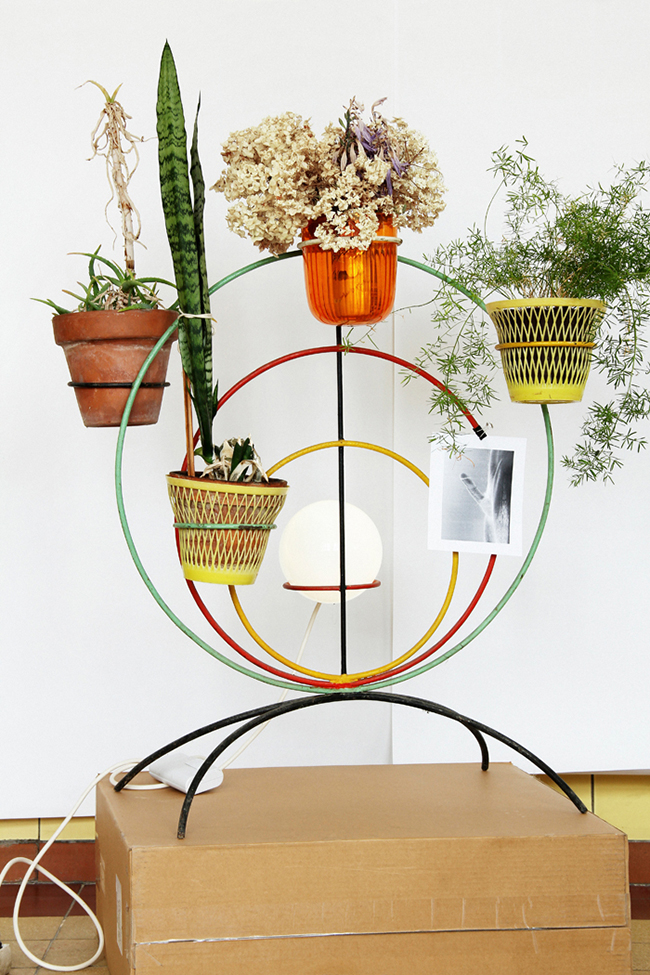 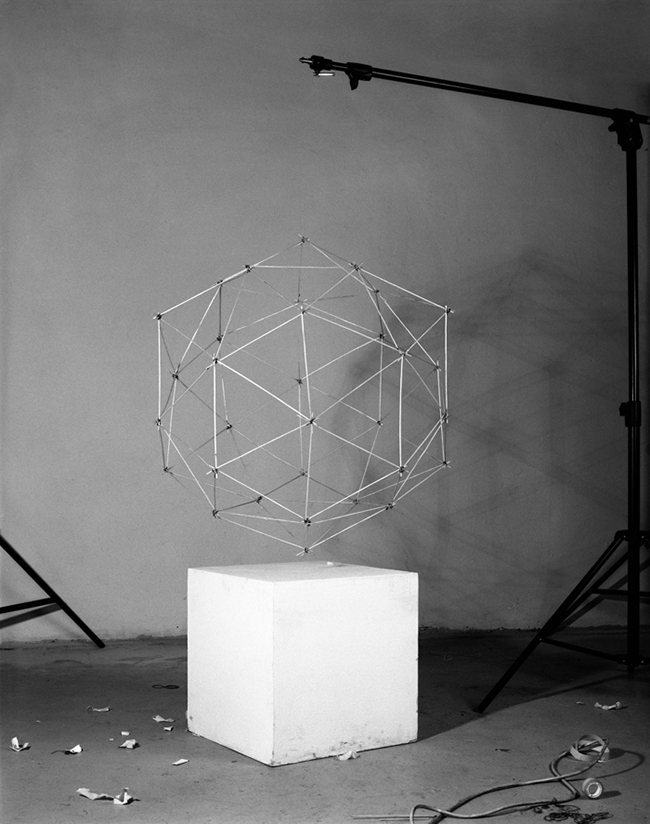 A dual polyhedron with cube, 2011, Budapest 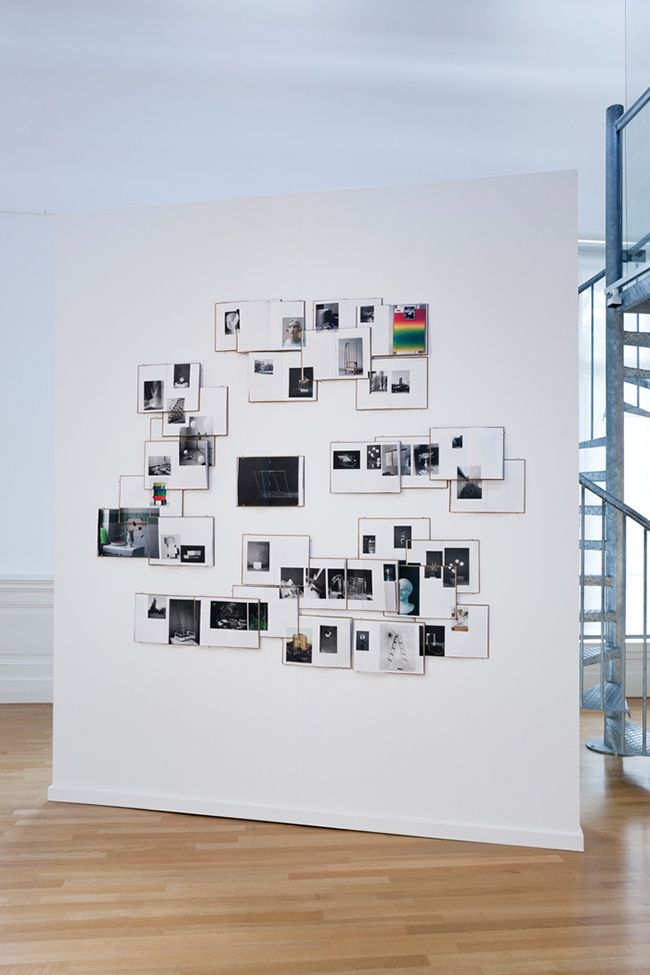 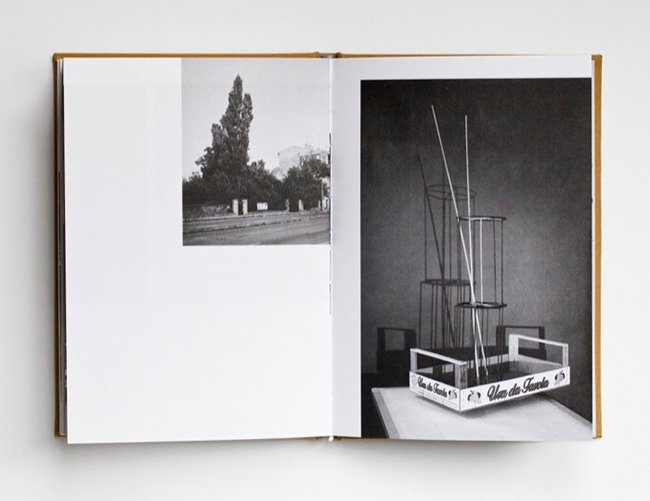 Spread from the book ‘Handbook to the Stars’, published by Stokovec – Space for Culture, Banská Stiavnica, Slovakia.
Photo: Peter Puklus 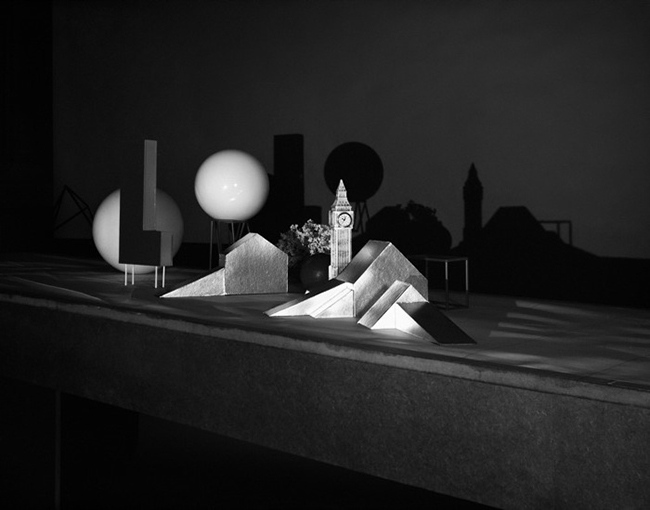 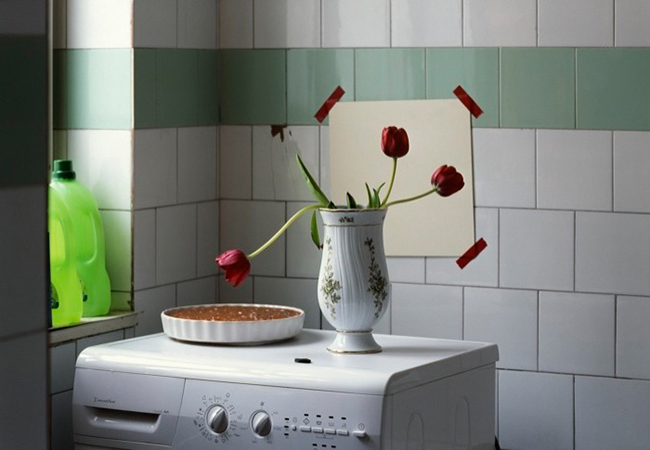 Three tulips and a cake in the bathroom, 2009, Budapest 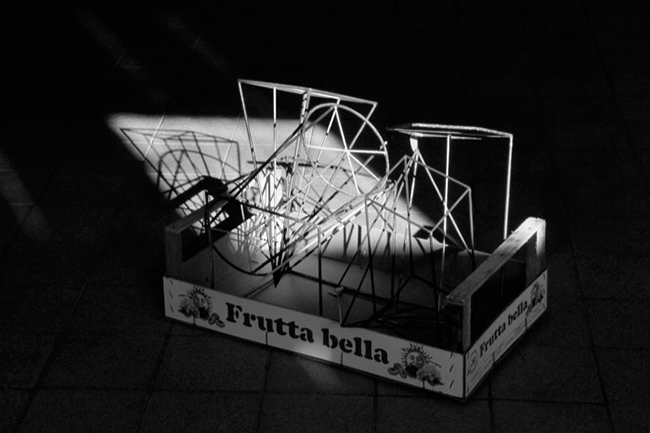 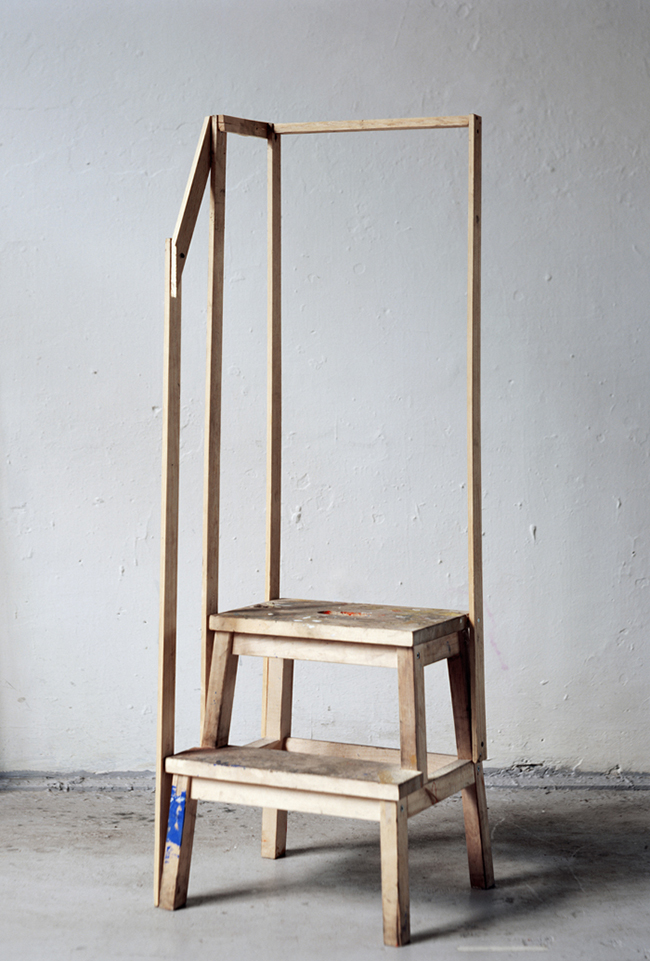 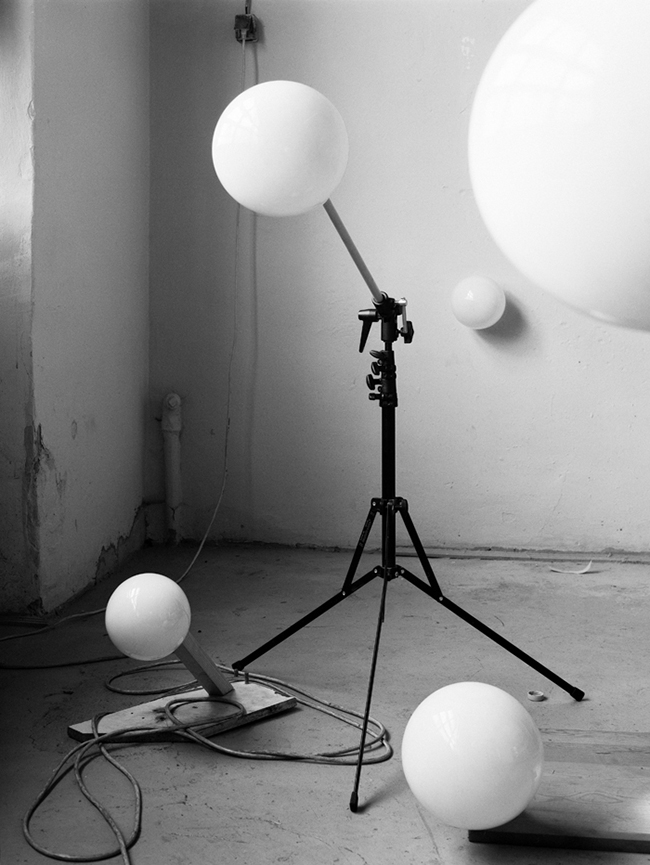 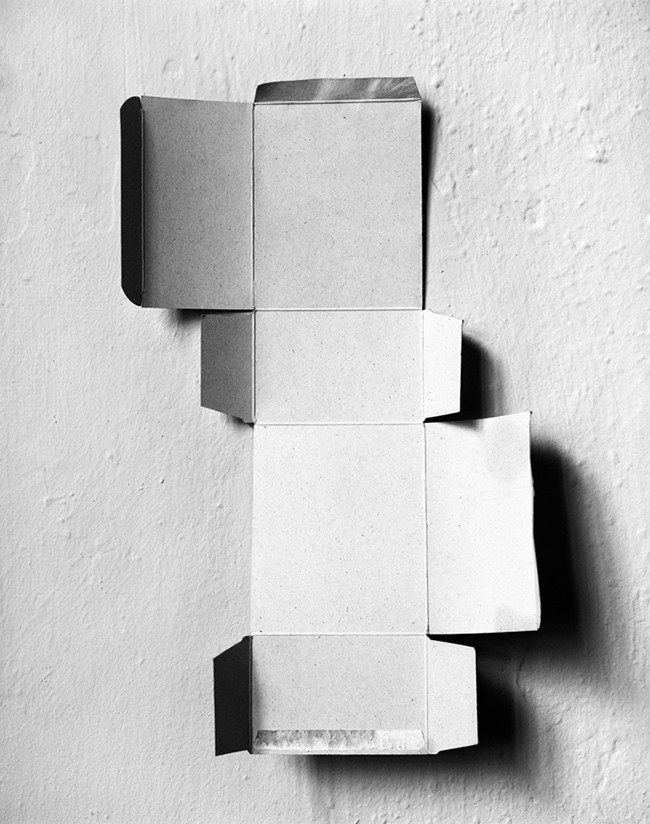 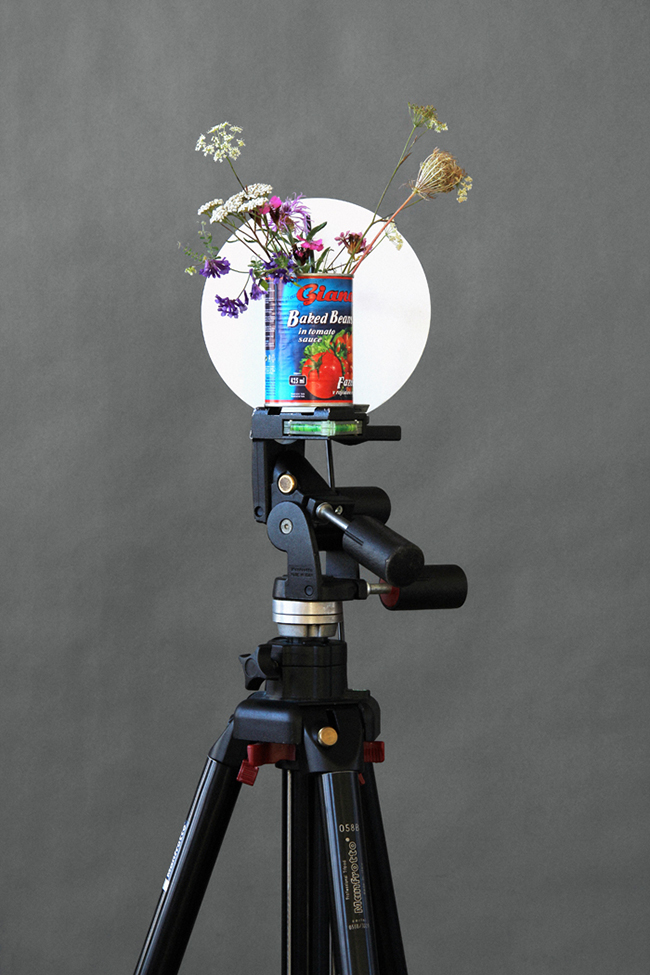 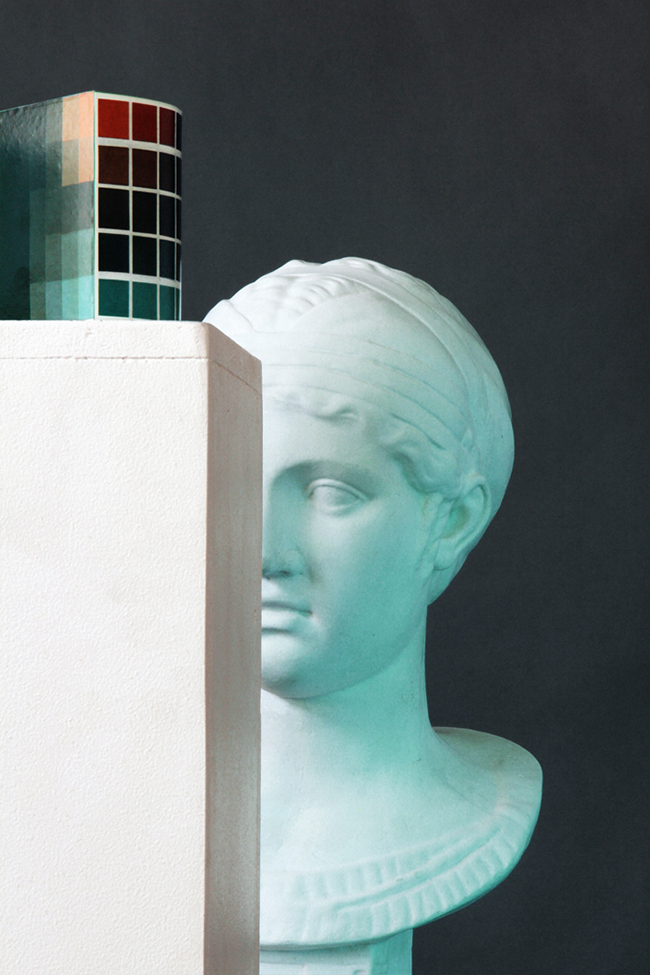