Established in 2010 by Bruno Ceschel, Self Publish Be Happy (SPBH) has become a culturally significant and innovative project within the photo book publishing world. Broken into 2 divisions, SPBH and SPBH Editions, the aim is to celebrate, study and promote self-published photo books through events (such as exhibitions, displays and talks), publications and online exposure.

SPBH also organises workshops that help artists and photographers make and publish their own books. They’ve published work by a number of established and upcoming photographers such as  Adam Broomberg and Oliver Chanarin, Lorenzo Vitturi and Mariah Robertson, to name a few. Set in the vibrancy of East London’s Ridley Road market, we spent an afternoon with SPBH Founder Bruno Ceschel, and intern Jamie Shaw, at their studio. Read on for more… 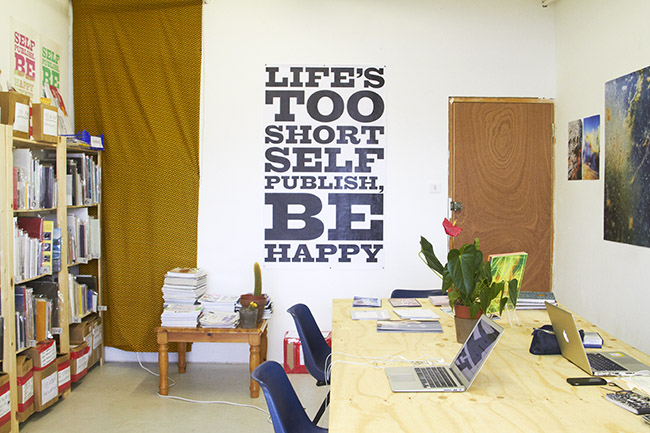 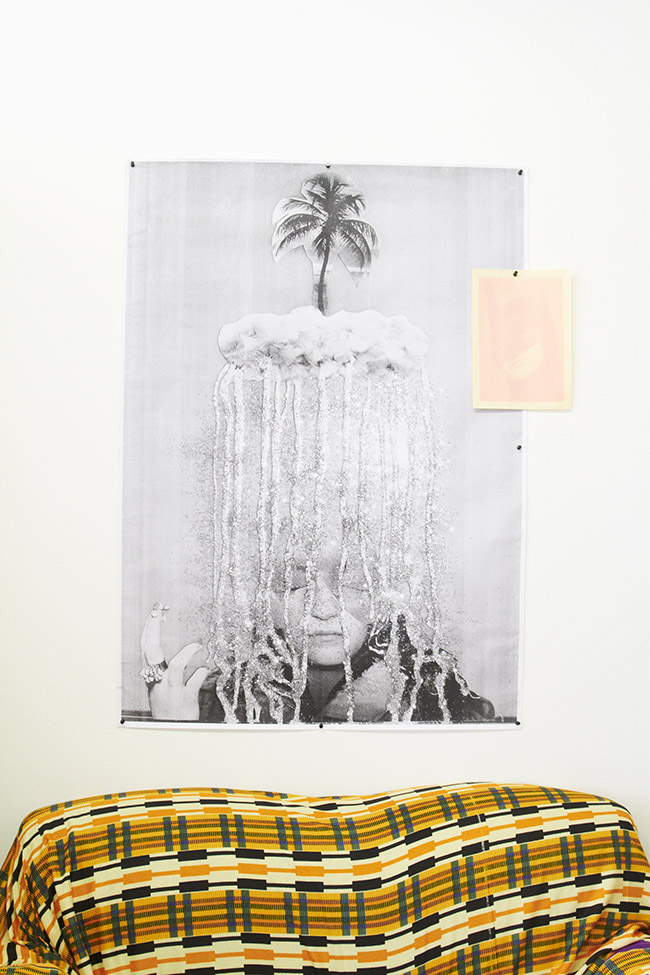 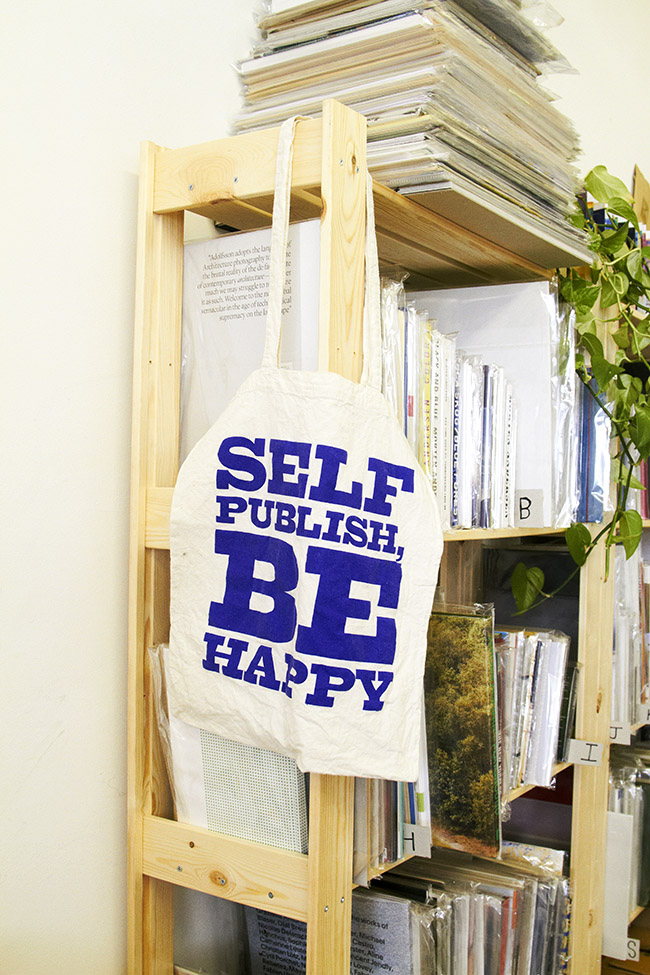 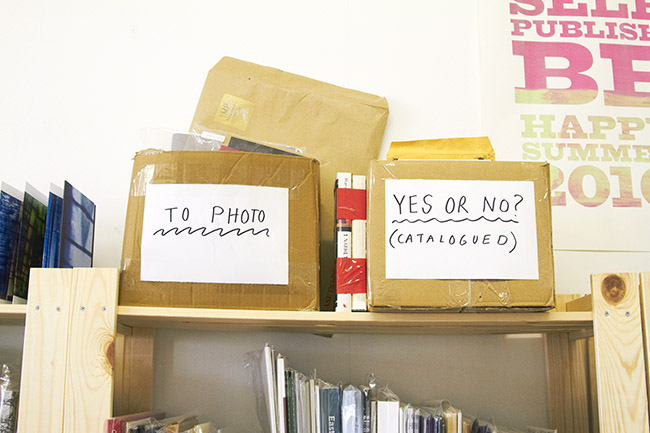 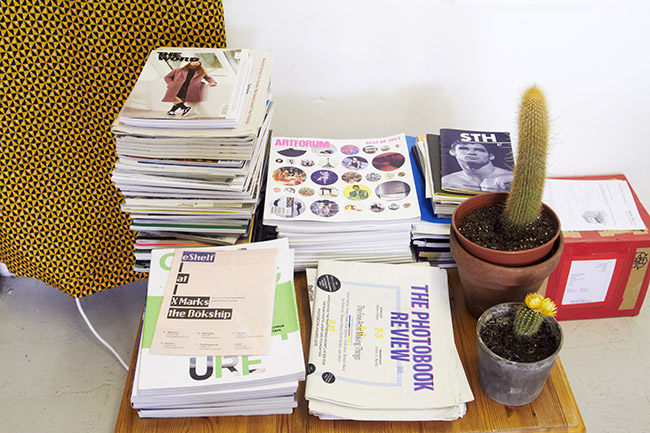 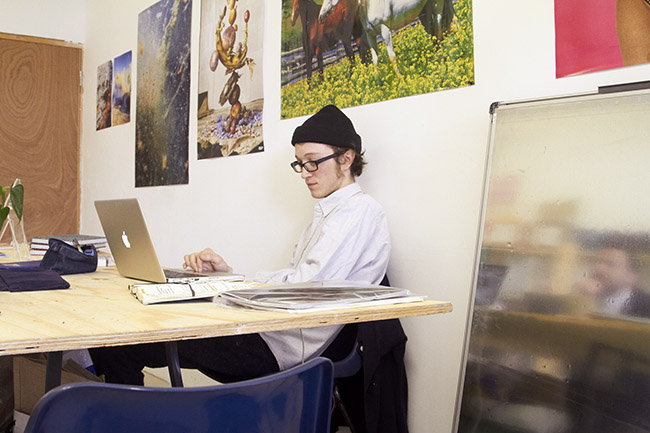 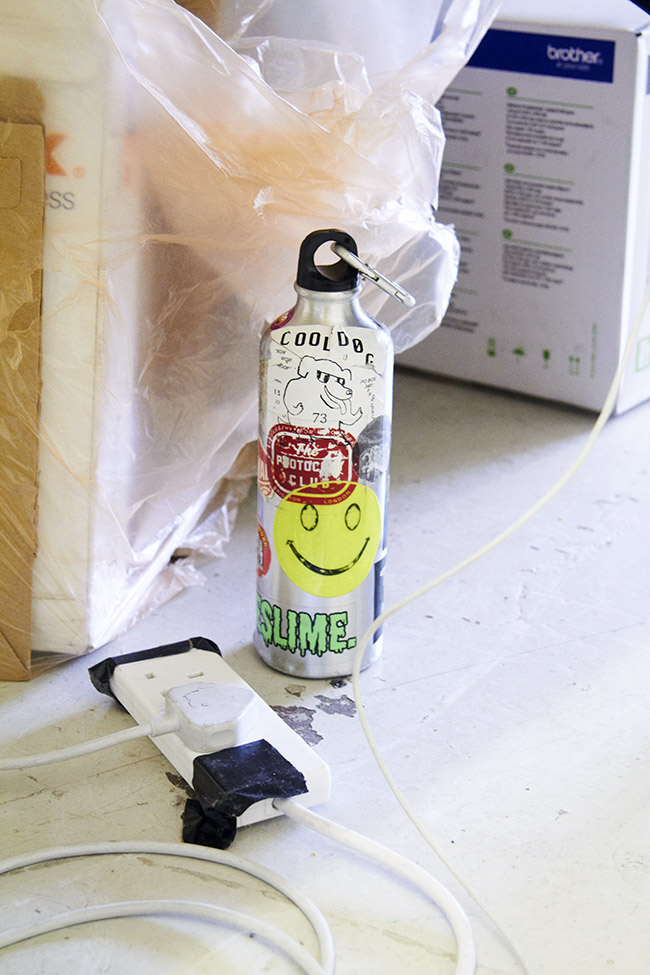 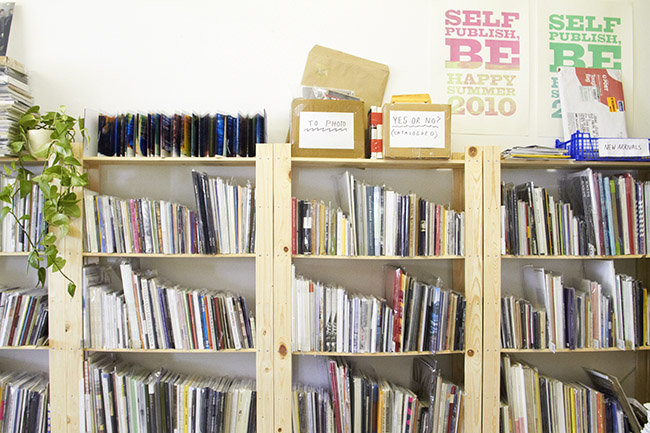 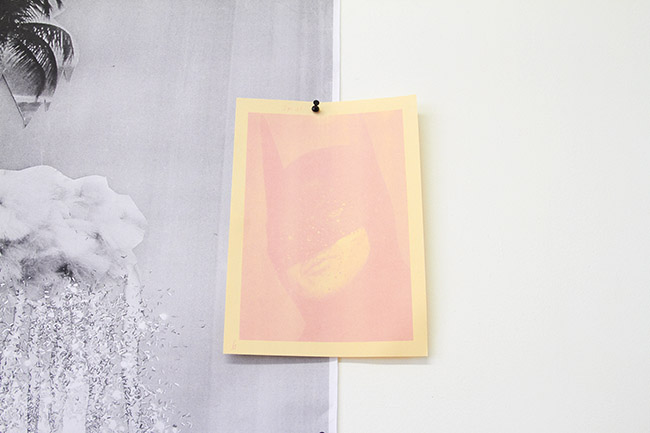 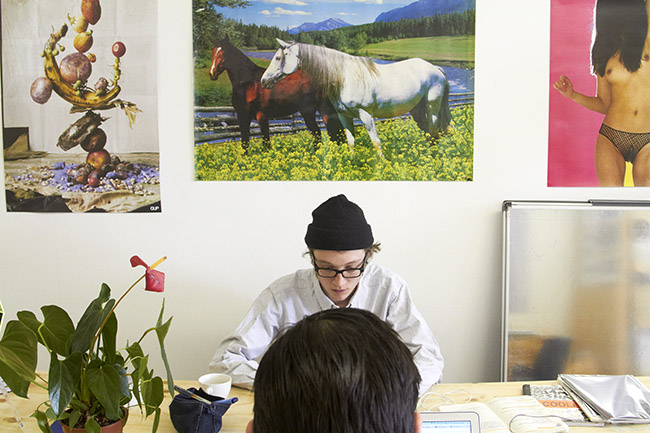 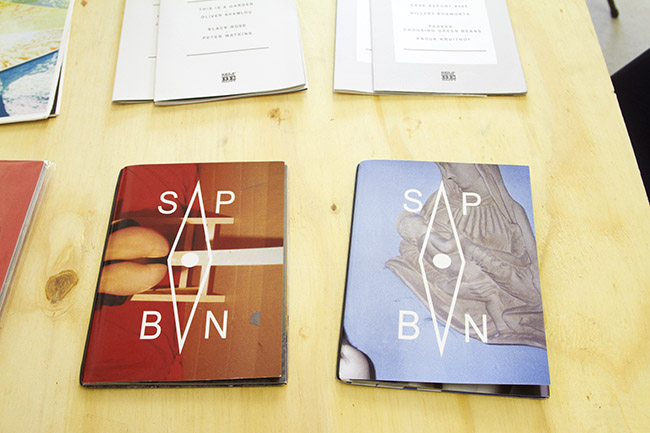 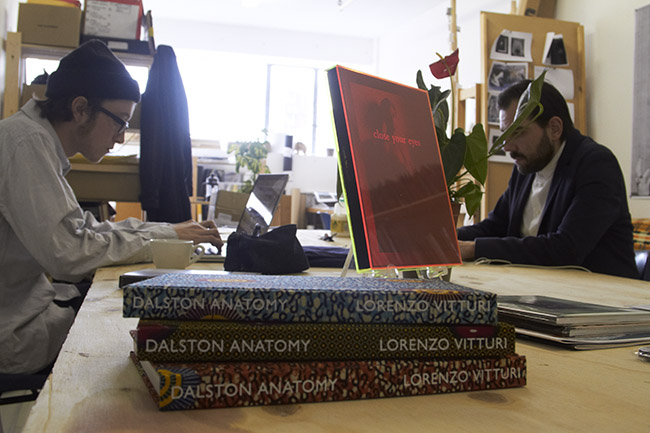 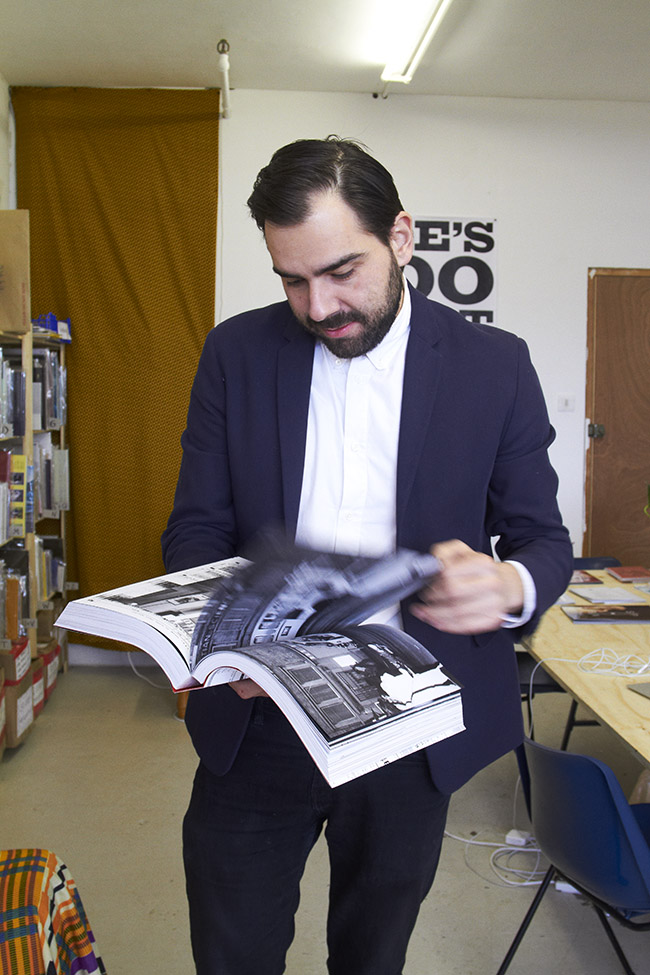 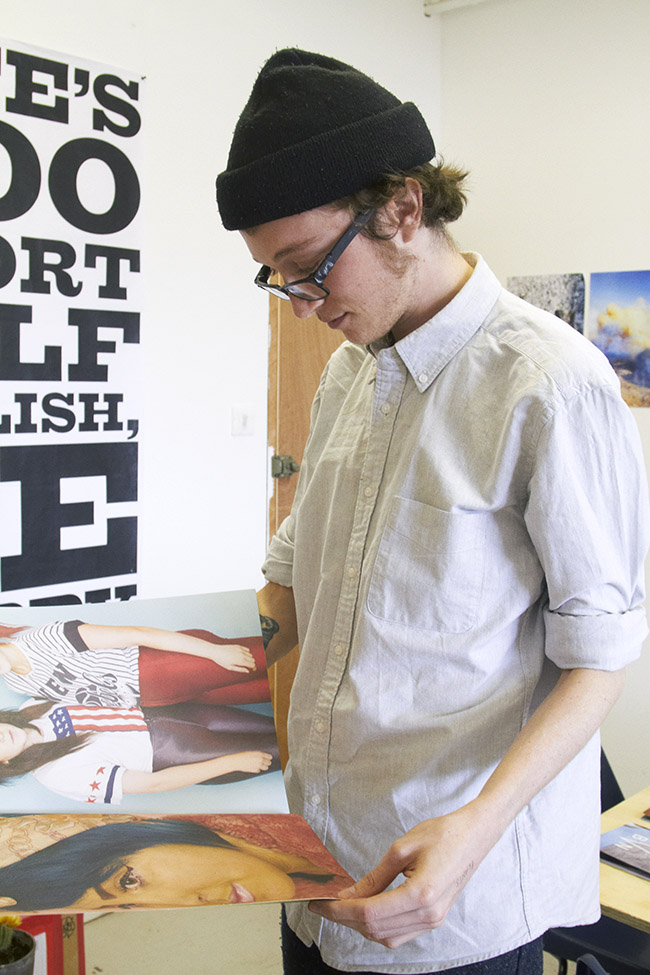 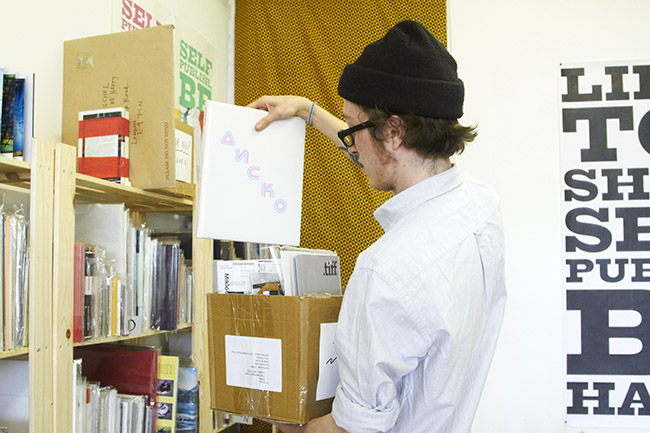 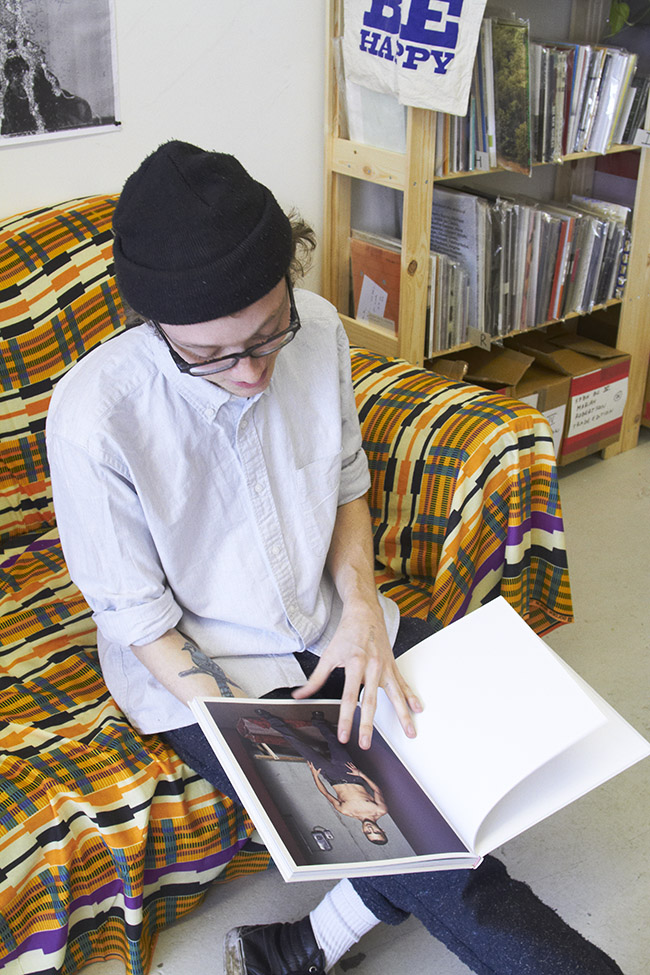 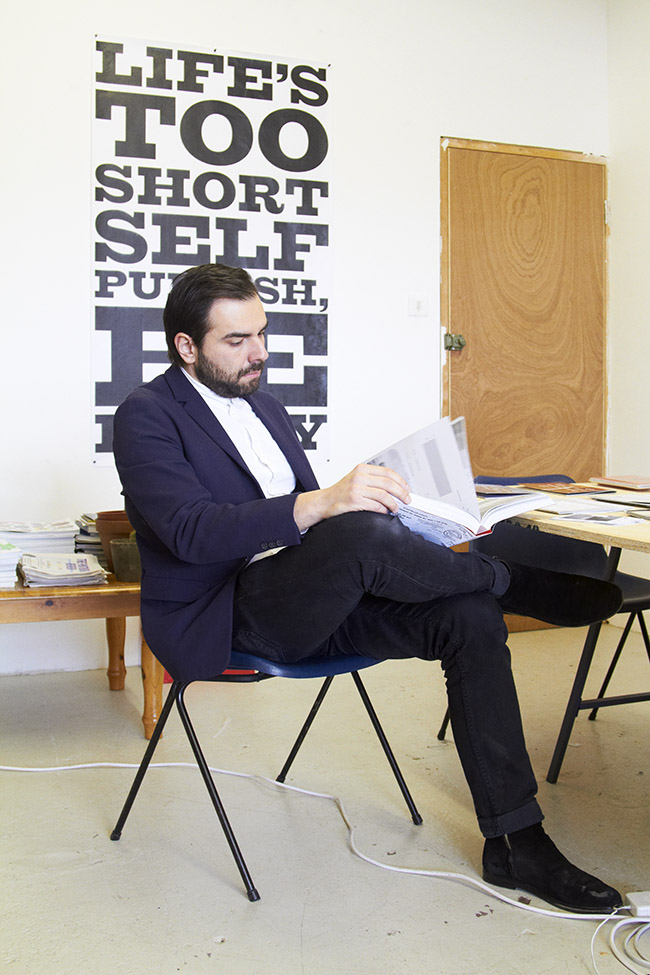 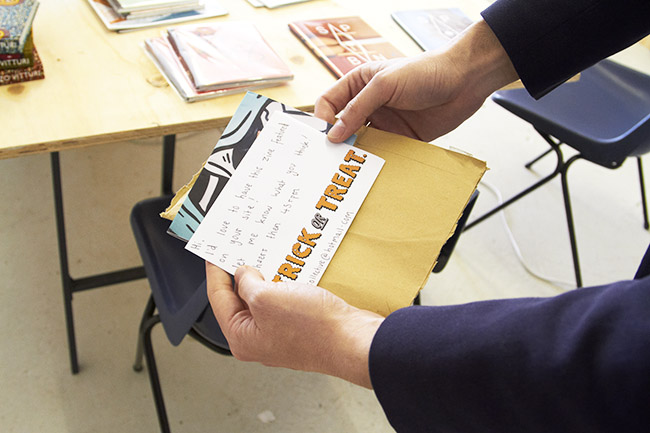 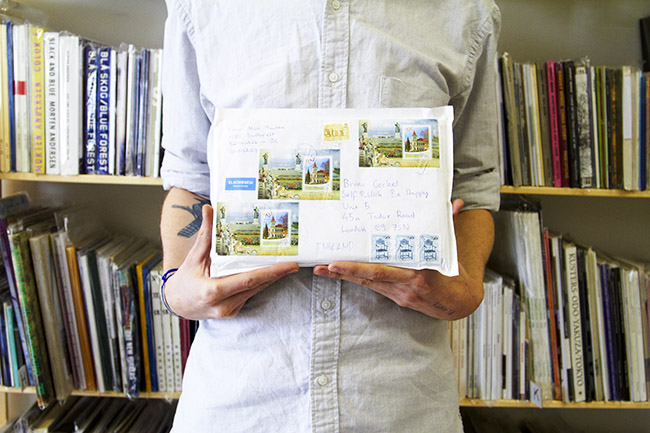 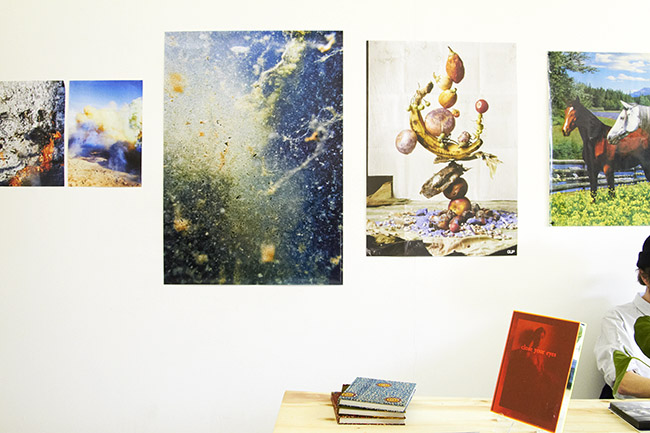 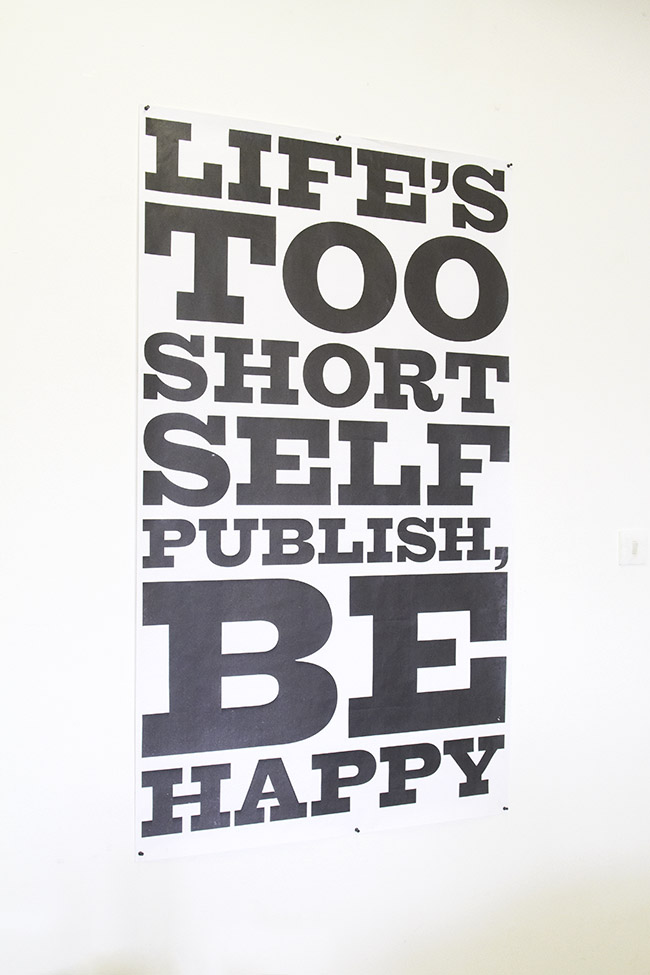 Where is SPBH and how long have you been in the space?

Our studio is based on Ridley Road, in Dalston; we’ve been here since August last year (2013).

Is the studio space shared?

We share the space with 2 photographers; one is Trine Stephenson, who also runs the magazine The Plantation Journal. Someone just moved out of the other space, so it’s currently vacant.

We’re usually in 3 times a week for the entire day, as I also lecture at college twice a week, so we’re here Tuesday, Wednesday and Thursdays.

When are you most productive?

That’s a really good question, I guess mornings, more than the afternoon. Because we work on so many different projects, it does become a bit of a distraction, more than a place to concentrate. I mean, if I have to write, I’d do it from home or elsewhere; the studio space is more about doing stuff together with the team.

How long have you been running SPBH and where did the idea come from?

Since June 2010. It came about when I was living in New York in 2008-2009 and I was working on a show and a book on contemporary photography for a publisher, so I was doing a lot of research and I got to know a lot of the artists for the show. Getting to know these artists and seeing some of their material like the books they were producing, I became really interested. I come from a traditional publishing background and I became partly bored, partly frustrated with the limitations of a traditional trade market, so when I saw these artists making really exciting, experimental publications, I became re-energised, so I decided to set up a project to facilitate such publishing ventures.

Do you think it’s easier now for artists to get their work seen?

Absolutely, I mean even in the short amount of time from 2010 to today, things have changed dramatically. If you think about how phenomenally big the New York Art Book Fair is now, how important Offprint is, how many shops there are now in cities that actually do stock artists books, so I think things have changed a lot and SPBH is one of those many projects. Also, when you decide to commission an online book review, you don’t really think about if the book is by a publisher or not. I think that question was there, only 5 years ago.

Why do you think it’s changed so much?

I think it’s a combination of many things; one is that the traditional publishing world has collapsed, so new players have now come in; technology has facilitated that change so to print digitally or not, has become accessible to most people. I think photographers have become more sophisticated, in the way that they put together these publications, partly because of the internet, they are more aware; if you think about our current intern Jamie Shaw, being at university he was probably aware, through Tumblr or other websites, as to what other artists were doing across the world, so even our palate has become more sophisticated.

Years ago, if you wanted to go and have a look at specific art or photo books, you had to be in a big city, most of the book stores would not really stock interesting books, etc. If you were at college I guess the library would have some of that, but not that many.

So what are you working on at the moment with SPBH?

SPBH and SPBH Editions are 2 separate things. With SPBH we have a lot of different projects, we’re working with 2 architects on this travelling library project; we’re working with GQ on an insert for their August issue, we have workshops in April…

What will the workshops be about?

They’ll be held here at the studio and will be general self-publishing workshops. We might also do one with Lorenzo Vitturi based around still life, here in Dalston, so that will be an interesting weekend workshop. With SPBH we’re also re-launching the website, so we’re also working on that.

With SPBH Editions, which is our publishing side, we’ve just released SPBH Book Club Vol V by Esther Teichmann. Next month we’re also releasing the 2nd edition of Dalston Anatomy, which is a sort of evolution of the first one.

In what way will it be different?

Apart from the fabric that will be used for the cover, some of the pictures inside will be different, but only slightly different. It has to do with this process that Lorenzo is involved with, which is making a sculpture for the camera and the sculpture existing just for the camera, being photographed in different moments; because they’re made of organic materials such as fruit and vegetables, they don’t last, so for 1 sculpture, there are many different photographs, partly to do with the angle, as well as when they were being photographed. So in a way, the book is the same, but will be an evolution in terms of some of the sculptures.

We’re also working on a number of releases for September, including artists Johan Rosenmunthe, Gareth McConnel’s Close Your Eyes, which was original produced as an artists book, in other words physically made by the artist. So these books will be released in time for the New York Art Book Fair and Paris Photo.

We’re working on a new series of literary books, which are basically a combination of text and images. So the first one in the series is by an artist called Rut Blees Luxemburg and a philosopher called Alexander Garcia Duttman, so that’s scheduled for September as well.

A lot of the projects we do run over a long period of time, especially book projects. The book club books, which are a collaboration between us and an artist, sees the artist conforming to a format, the work is created and thought out in terms of that format, so some of those books take years to come together, which are very different to say Dalston Anatomy, where we’re there to facilitate the vision of an artist.

We’re now for example, just to give you a sense of how these projects work, working on a project with Max Pinckers, a really interesting artist who’s based in Brussels. He created these 2 successful self-published books, and we’re planning on 1 for the book club. He would like to work on the project here in London, so we’re currently applying for a residency in London, so he can be here shooting for it, so it’s going to take at least another year for it to come to fruition.

We mostly work with people that are part of our community, so you start having a conversation with someone at Paris Photo for example about a possible collaboration, then a couple of months later you have a 2nd conversation that’s a bit more serious and we try and take it from there.