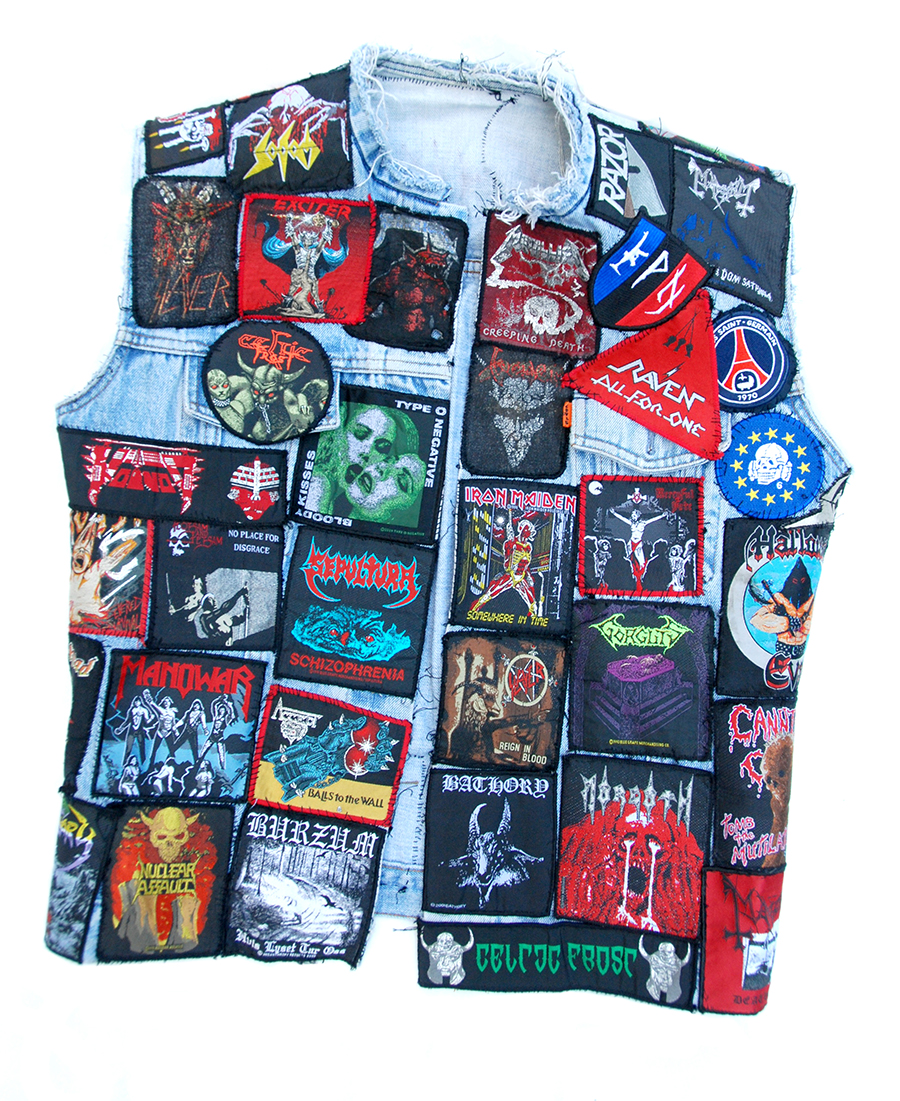 Metal style was a fashion in the 90s with groups like Guns n Roses and
Metallica. Now we are in an era that’s more based on reblogging than pure
avant-garde creation. In this climate, it’s to be expected that metal visuals
fascinate a public that’s not necessarily into metal as a pure art form.

Heavy metal is a vast and complex subculture, with supremely elitist followers and heavily codified attire, impenetrable to those outside of its fanbase. As heavy metal’s influence continues to spread throughout culture, from Justin Bieber’s Purpose Tour imitation of Pentagram’s logo to Tommy Genesis wearing Toxic Holocaust merch, Melchior Tersen’s timely and impressive book, Killing Technology, documents the frontline of its symbolism: patches and patch jackets, DIY garments that fans build up themselves, sometimes over many years. Patches are bought at festivals, on merch tables at gigs and from record shops and online distros. Sites like T-Shirt Slayer exist both to trade in rare items and, more importantly, to show off collections of rare items. The breadth of the genre is overwhelming, but most true metal fans would be able to size you up immediately by the patches you wear on your jacket.

“Authenticity” is the theme of modern times, which plays really well with metal: the most elitist subculture in the world. Where do you see this going in popular culture and why is it so relevant now?
With the internet the way it is now, true authenticity doesn’t exist anymore. References of where things come from, originals, copies.. it doesn’t really matter to people these days as long as it fits the time and place. Ten years ago, if you put on a band or soccer club tee shirt, and you didn’t know what it was, you would have looked like an idiot. Now if the shirt is good, you look cool. But that doesn’t bother me; I think it’s funny when I see a rap fan wearing an Iron Maiden shirt. It doesn’t stop metal music from continuing to be made. The metal scene hate this sort of thing, because they feel they are dispossessed of their culture, but it’s just fashion. This trend will carry on for a little longer, then it will move on. In a year, it will be reggae, then the return of 70s style or something. Metal style was a fashion in the 90s with groups like Guns n Roses and Metallica. Now we are in an era that’s more based on reblogging than pure avant-garde creation. In this climate, it’s to be expected that metal visuals fascinate a public that’s not necessarily into metal as a pure art form.

Elitism is borne out of frustration or foolishness. There’s always going to be a guy who will despise you if you don’t know the name of Sarcofago’s first bass player. Elitism often comes from discomfort. In art it is the same thing, it is easy to be elitist when you exist within a small domain that you master, but know nothing of the rest of the world.

Do any patches, in your opinion, immediately mark someone out as an idiot?
The more passion is visible, the more striking it is. Humans need constant reassurance and it’s easy to make fun of people’s fragility. So yeah one can appear an idiot, or different, but that’s also what makes metal such a close-knit community. It reinforces itself through codes. For my book, Killing Technology, Iggor Cavalera wrote this preface, which answers your question a little:

“One time in the 80s me and my brother Max were saved by our vests and patches… It was in a very shady neighbourhood in Sao Paulo after a hardcore show, we were walking to the the train station and got spotted by a gang of headbangers and punks, they were about to jump us, but one of them said… Wait, these dudes are wearing some sick vests (at the time it was Discharge and Hell Hammer). With that in my mind, it’s not always about the family we are born into, it’s about the tribes we become a part of! Wear your colours…Wear them with pride!”. 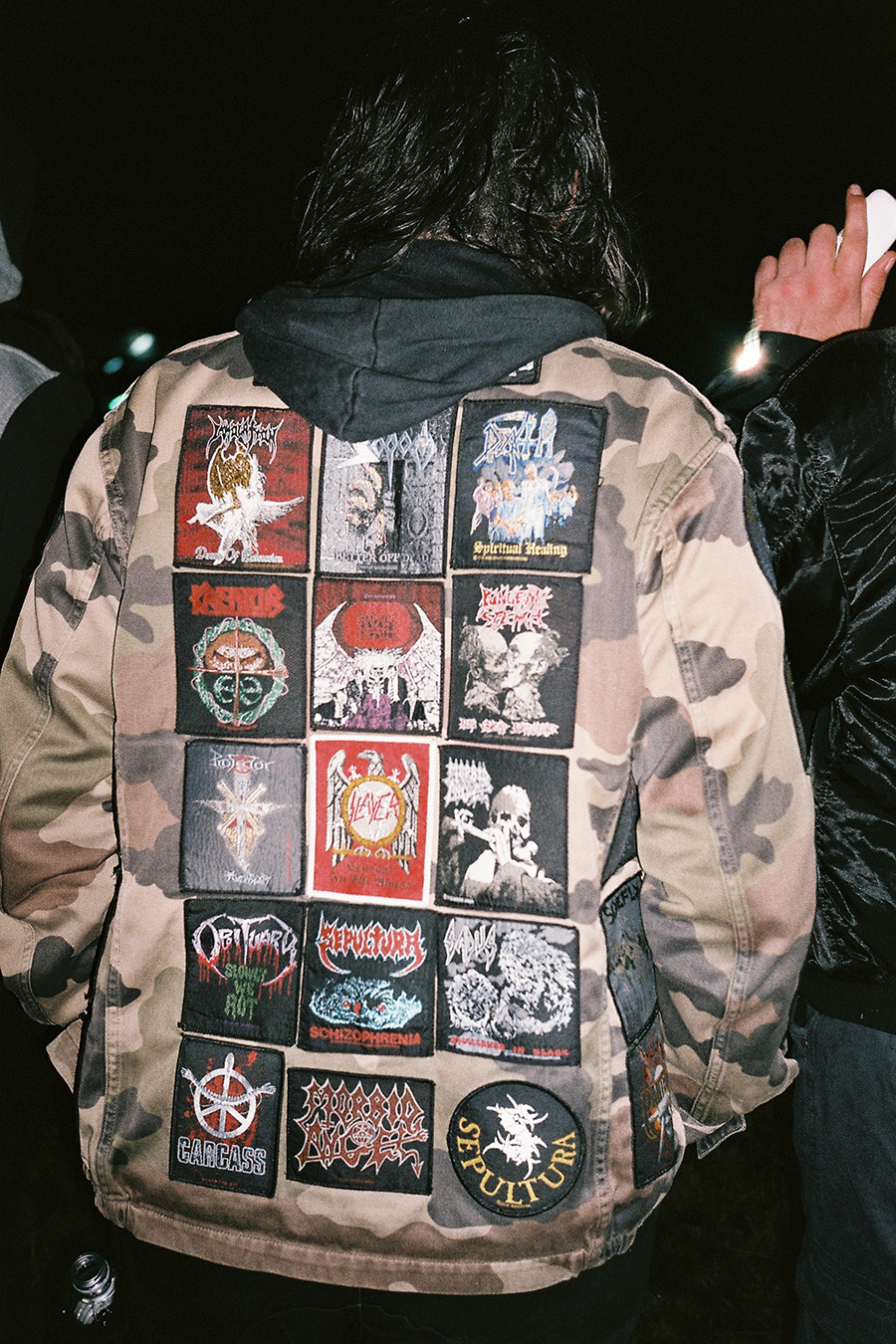 How interested are you in the politics communicated through metal patches?
Censorship is a concept that interests me a lot: what is politically incorrect and how does that evolve over the years. I am very interested in political anchoring in culture. Metal is so vast, there are so many bands, so many different stages, so it’s necessarily full of political opinion to a greater or lesser degree. I own several pieces of merch from groups that have been banned, censored or modified over the years to make them more marketable. Motörhead and Slayer are two good examples. The totenkopff and SS lightning sigils that were everywhere in the 80s and 90s have been replaced by other similar but less polemic signs. For the book, there was no process of censorship either on my part or that of the publisher; at no time did it cross our minds. Censoring metal would be absurd.

Do you know of examples of bootlegged patches that are more sought after than official ones?
There are recent bootlegs that have a hundred copies and are sought after because they’re beautiful and rare. But in general, no, they just cost the price they cost, but in 10 years that can change. I see it with T-shirts, old 90s bootlegs. When they have been worn-in over time, they can be very expensive.

Can you think of any comparable subcultures with such diversely rigid codes?
Each culture has its own codes with which one is immediately identifiable, with metal there is additionally a conservative, archival, reactionary aspect that makes the symbols accumulate and not get lost. Metalheads are seen as fans, so there is no problem with them collecting, archiving and behaving like a fan, no matter what their age. We find a similar behaviour in rap: common reflexes, styles of clothing and attitudes. There is a real collective identification. Rap and metal both exploded in the 90s, these are movements that are still recent and not yet completely democratised. 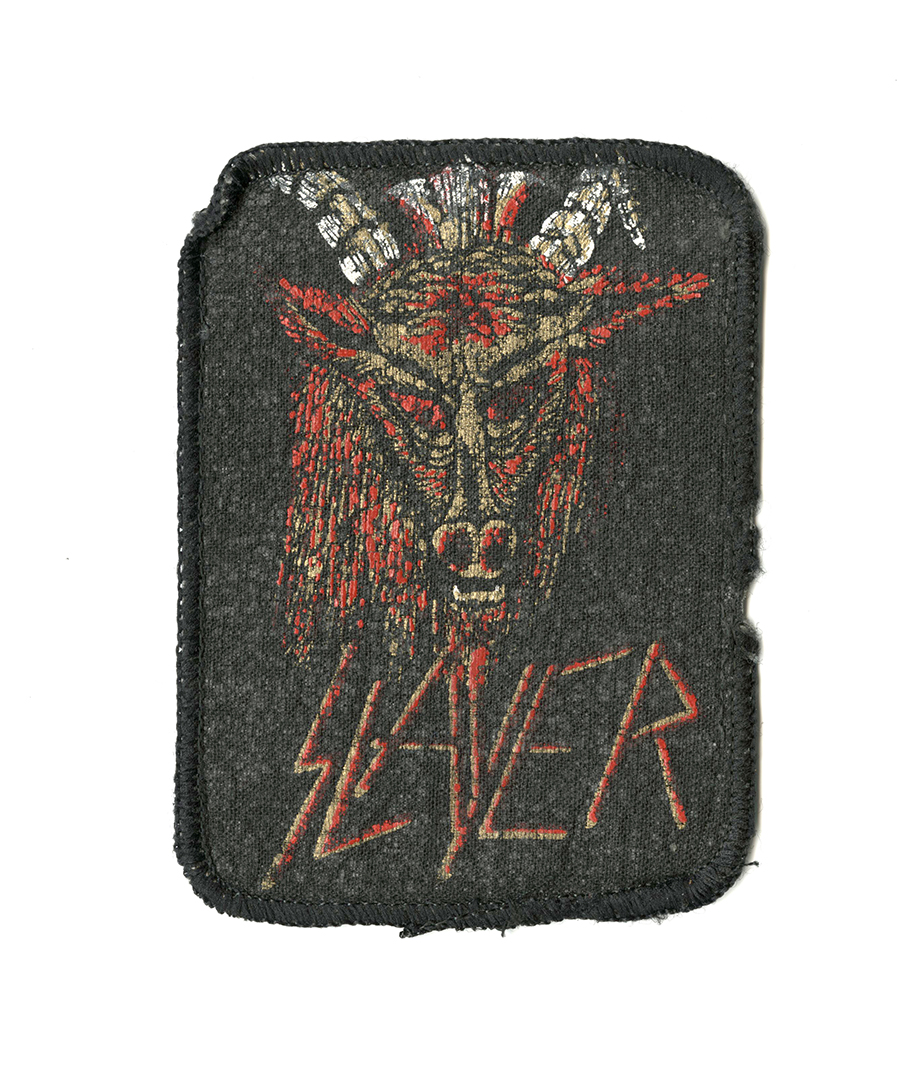 Elitism often comes from discomfort. In art it is the same thing,
it is easy to be elitist when you exist within a small domain that
you master, but know nothing of the rest of the world.

What’s the best base layer for a battle jacket?
A jacket filled with patches is expensive, it takes a long time to make. You need patience. So, it’s a shame to take a shit jacket as the base layer; it’s a garment so I’d take a good denim jacket, not some oversized shit. At first I took what I had at hand, basic Levis, but I’m on my tenth jacket now and I use old Levis from the 60s or 70s. But it’s complicated to make a beautiful jacket, it is a true passion. It’s not common to see a beautiful jacket, and it can be beautiful for a lot of reasons, and ugly for others.

What’s your most prized patch?
Well here’s a little geeky moment. Schizophrenia by Sepultura, Creeping Death by Metallica with a green edge, Extreme Aggression by Kreator and Painkiller by Judas Priest are four of my more prized finds. For my collection, I would say a Slayer patch that I bought on ebay for $50 from an American seller; he sent it to me in a $1 envelope. It’s one of the only ones of these patches I’ve ever seen. It must date from the Show No Mercy period; it’s a relic that specialists would appreciate.

Would you ever replace a patch on a jacket if the band sold out or release a shitty album?
I don’t think so, it doesn’t take anything away from what was done before. A month ago, I went to a festival with my brother. I saw Paradise Lost and Slayer, who were both great, and then System Of A Down who I had seen in high school over 10 years ago, which was a great memory. When I saw them this time, they were awful… I left and I think I would never put a System patch on a jacket, or even wear a T-shirt, while Slipknot, even if I’m not a big fan, will always remains cool imagery.

Are there going to be any innovations in the word of patches and metal merch or should it just stay the way it is?
Because of my interest in merch, I have observed the evolution, the technical progress, the cottons that have changed, the arrival of digital print that has made the visuals change. The quality is not the same, nor the thickness of the tee-shirts or the way they’re cut. But in general, it hasn’t changed in terms of form, it’s more that the imagery and all the digital processes have messed it up. Before they were all painted, drawn and handmade. Digital drawing or excessive digital retouch work is 95% horrible. But now we have new embroidery techniques that can make incredible patches, and it’s great to contrast them with screenprinted stuff from the 80s.

Do you also still buy metal on vinyl?
I don’t check new metal releases, I prefer to listen to old records that I do not know. There are so many groups out there to discover. My favourite music is rap, but I started enjoying metal in high school. I buy new French rap CDs when they come out because I want to support the artists, and I sometimes buy old metal CDs when I find them. But within metal music, the only band’s releases I get really excited about and which never disappoint is Burzum. 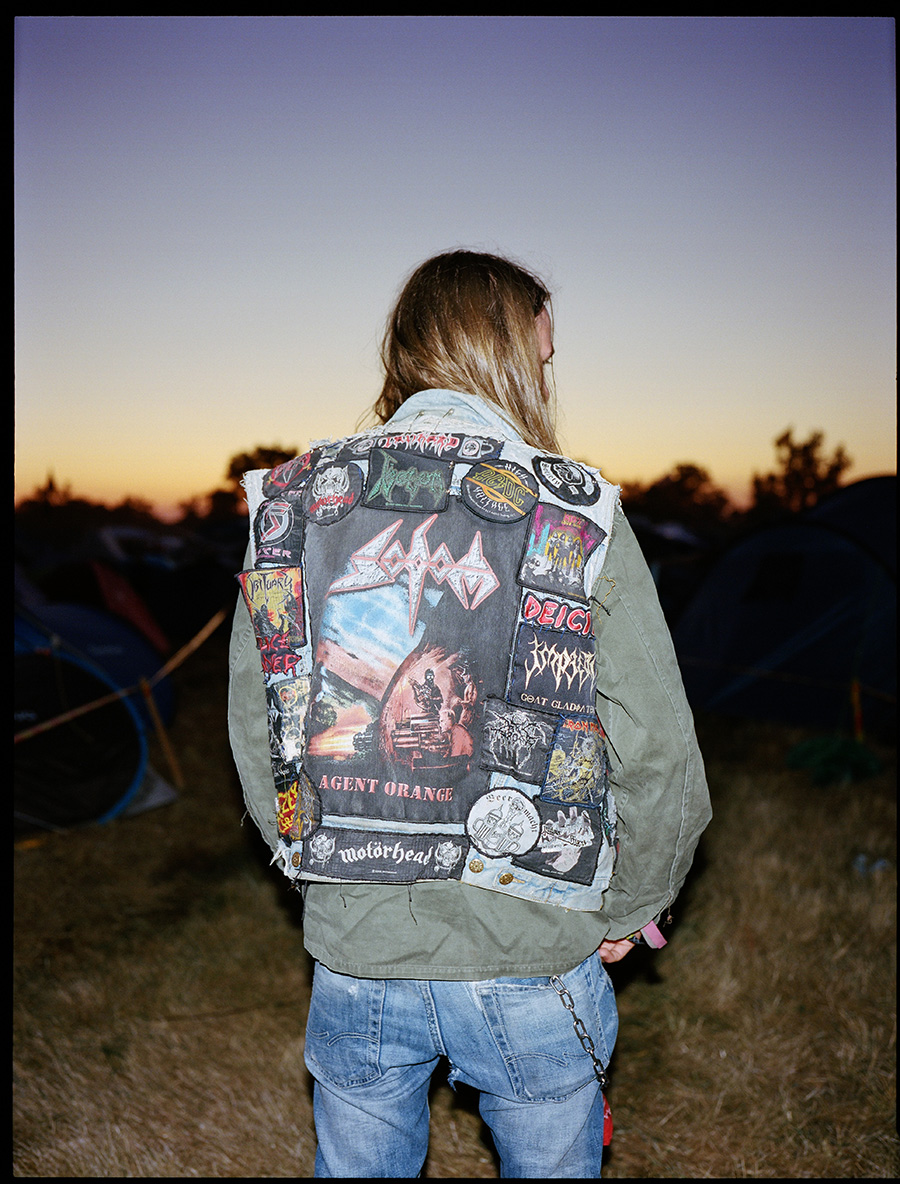 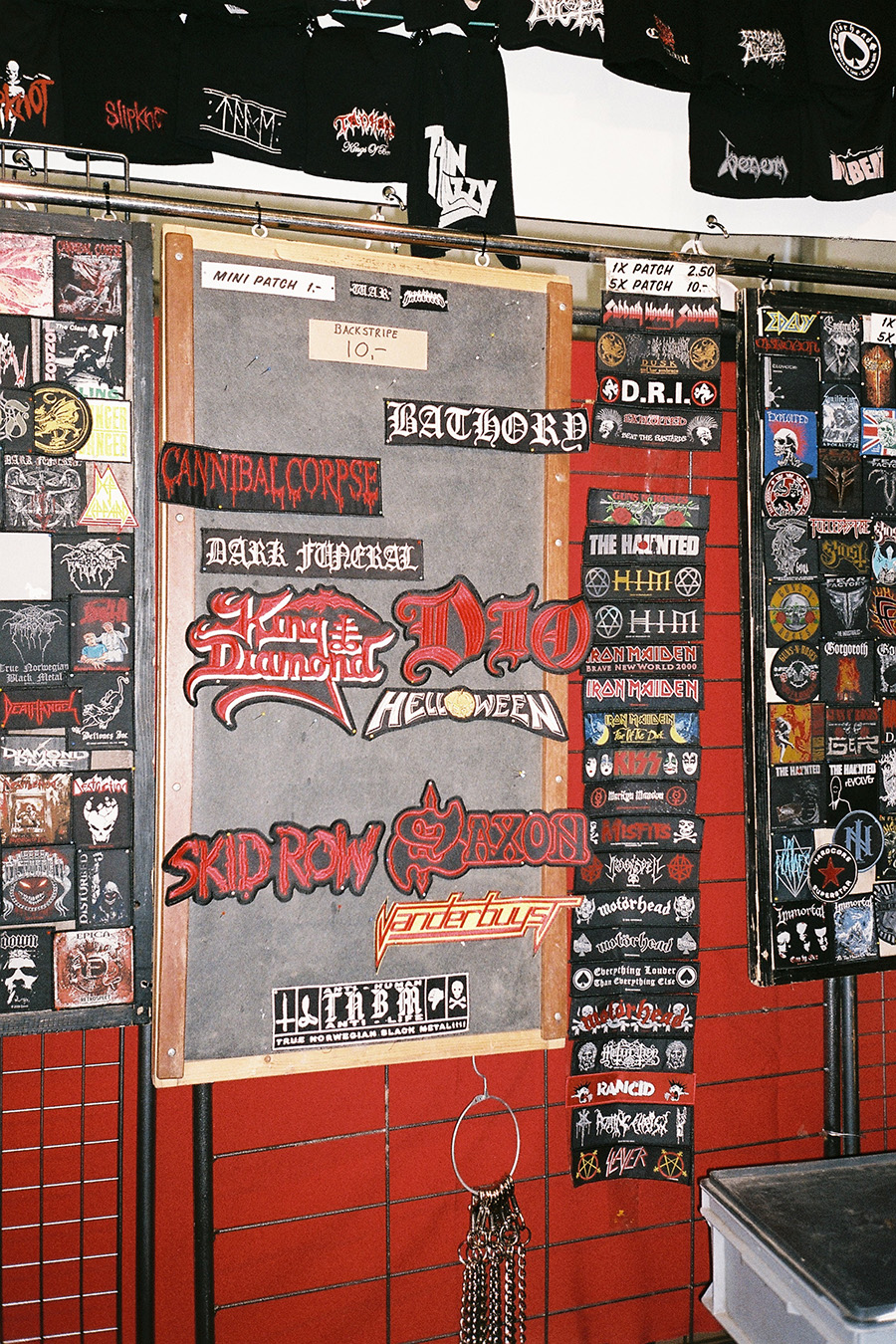 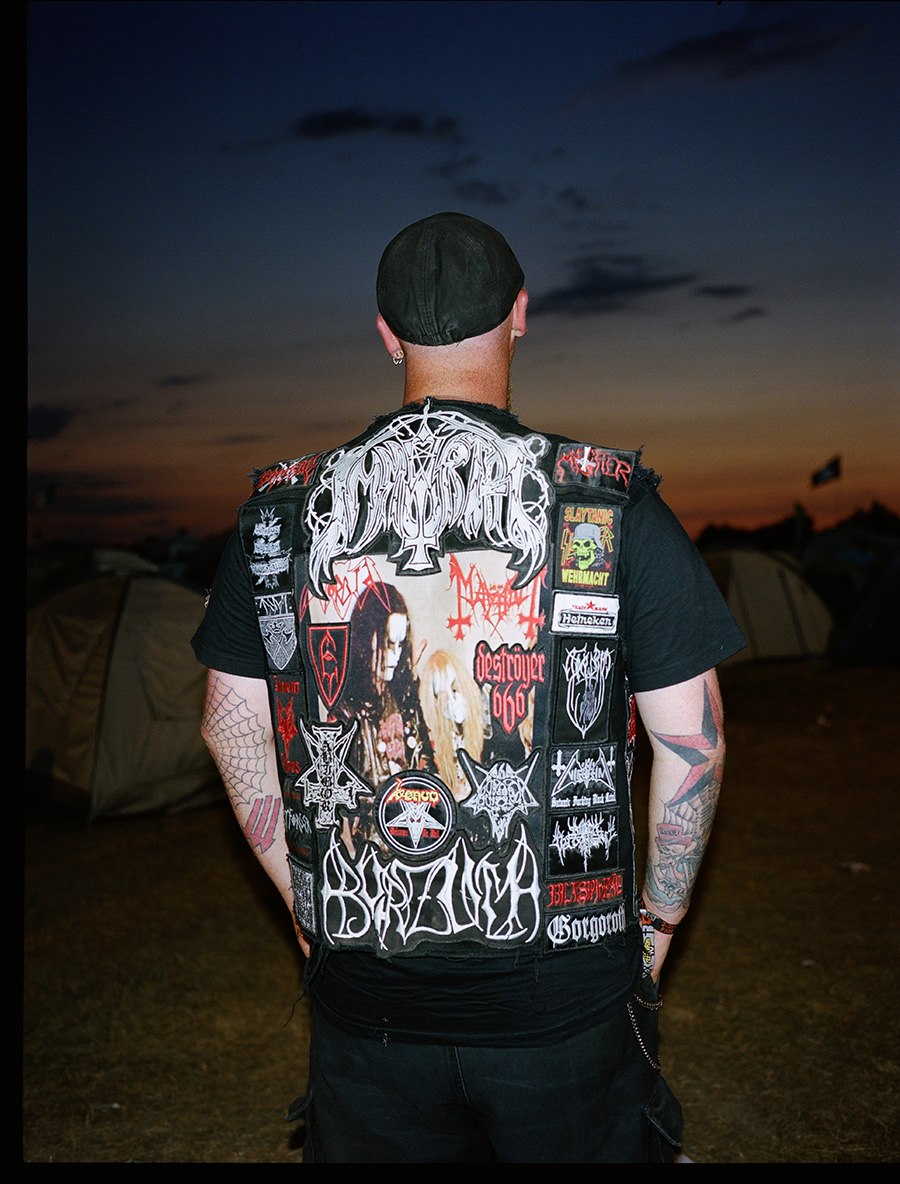 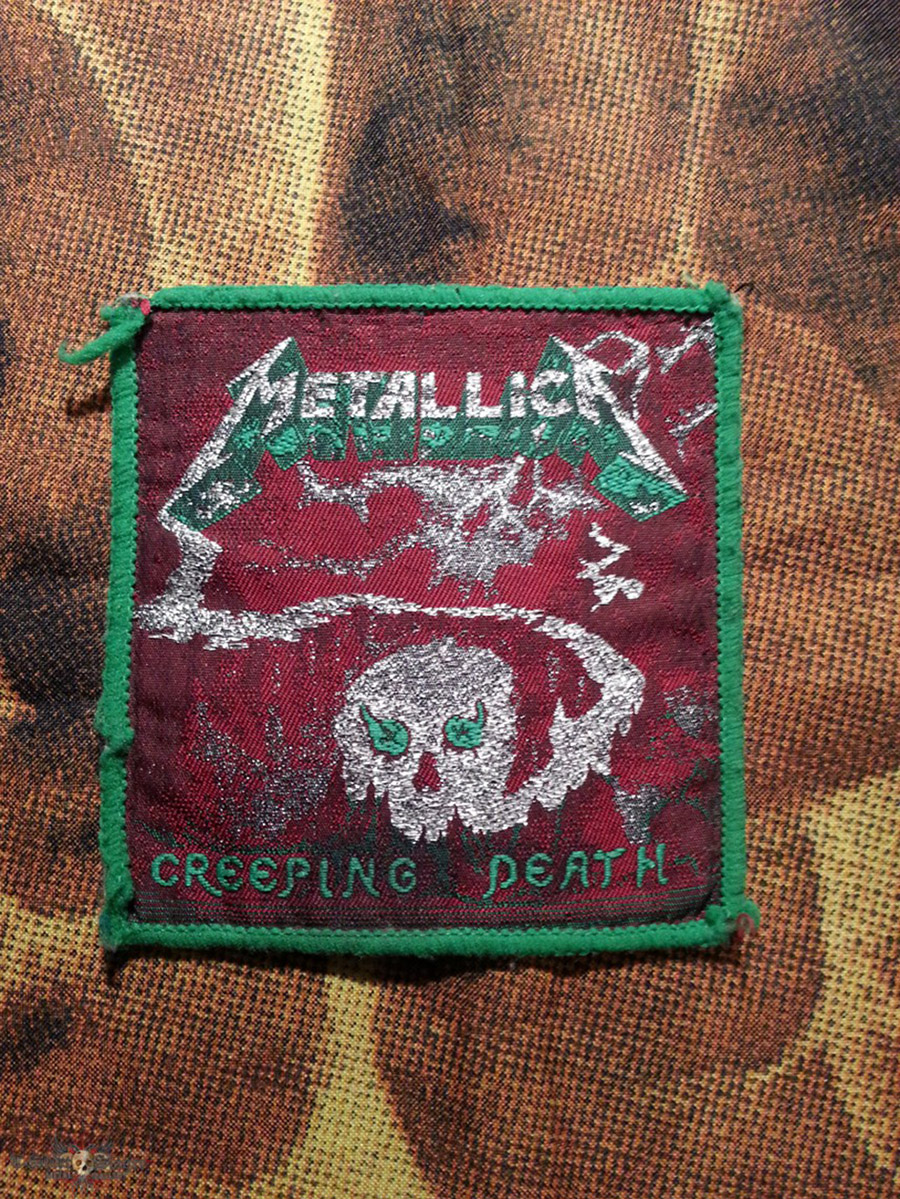 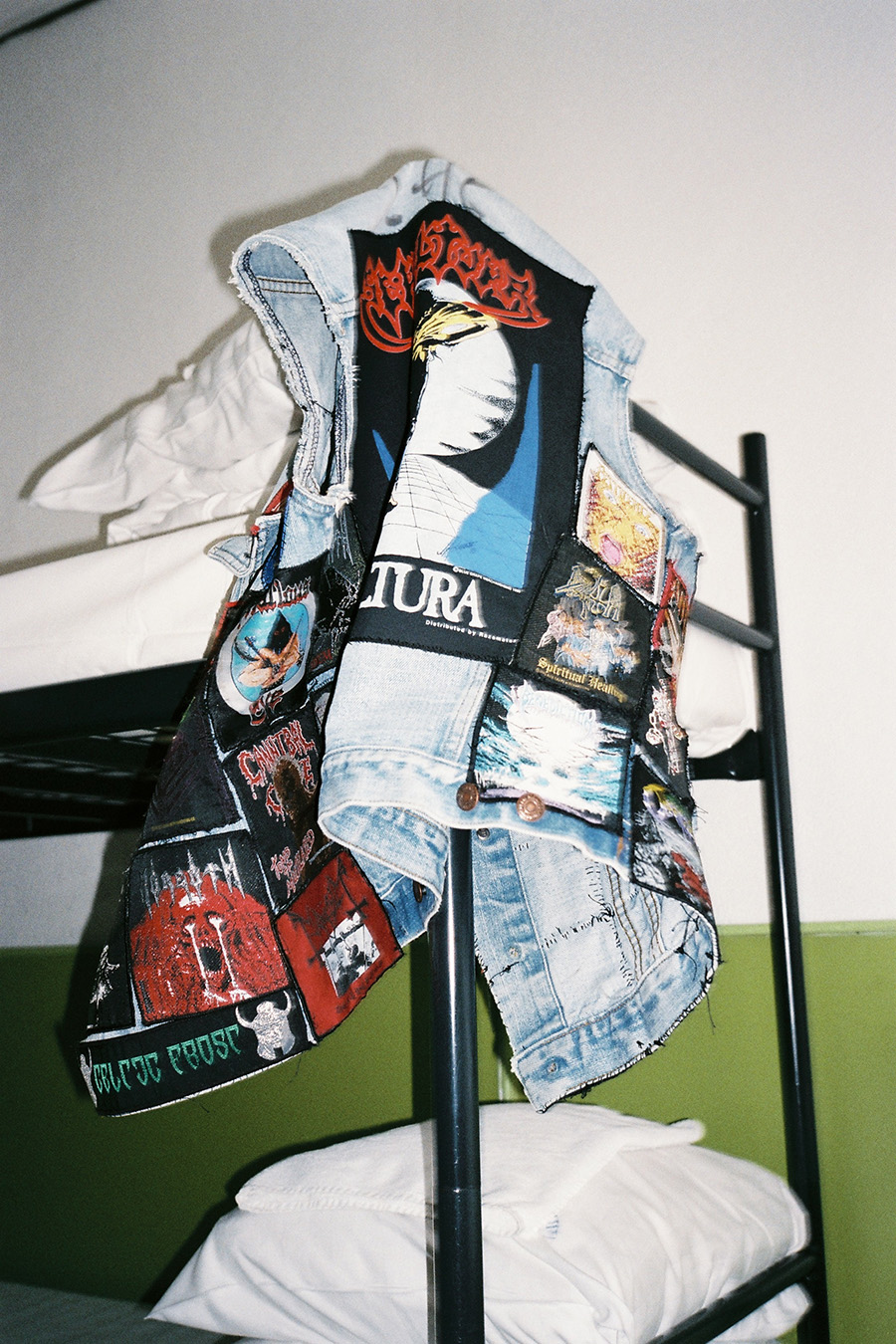 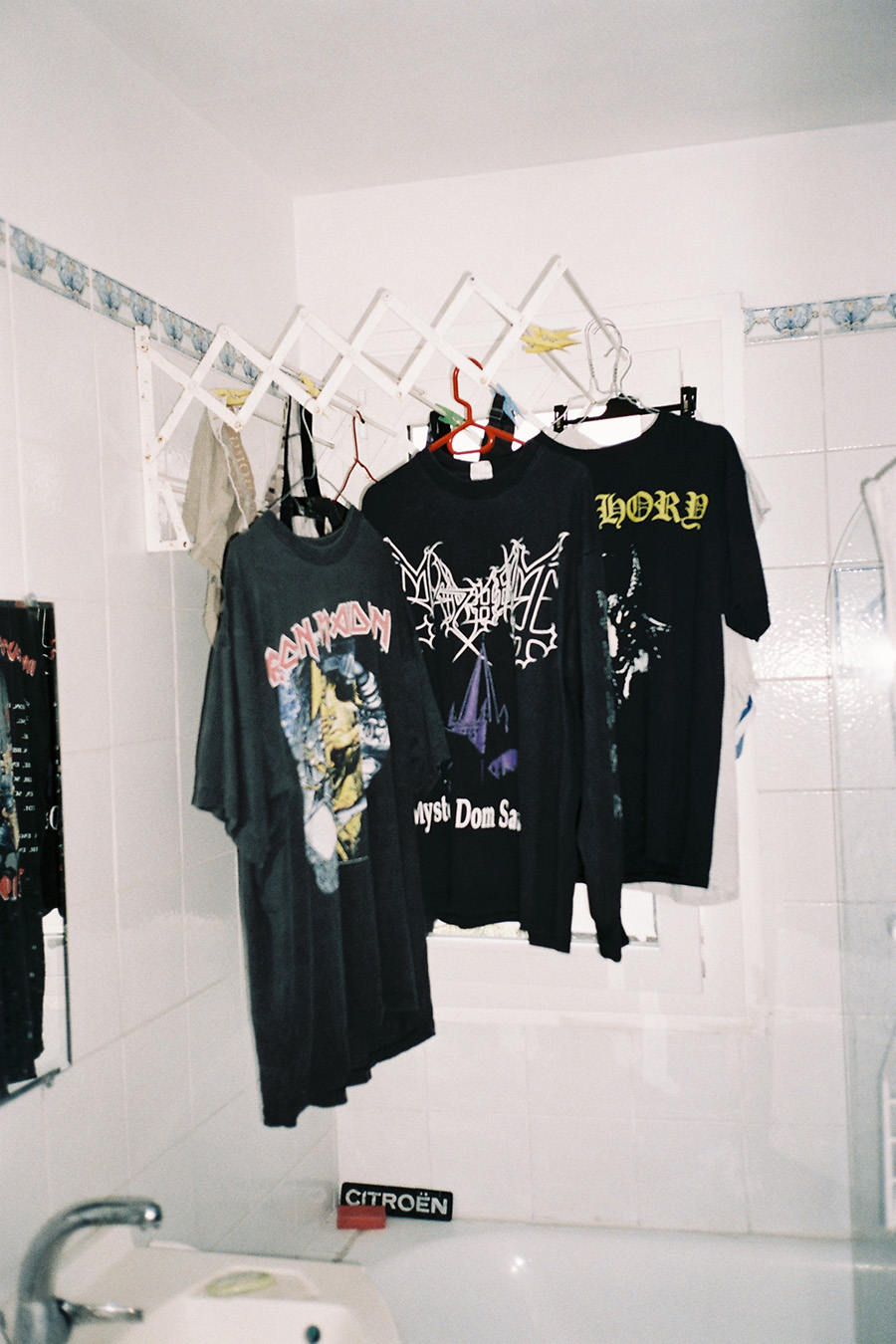