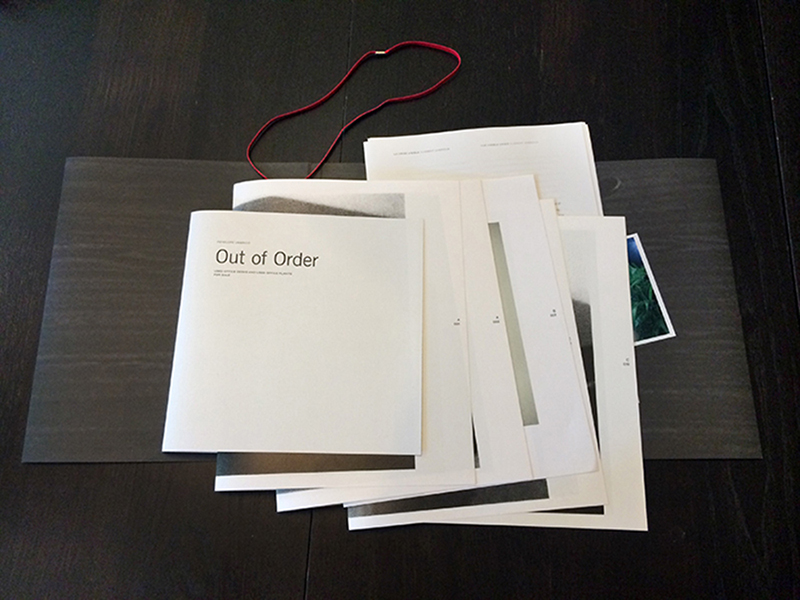 The aftermath of a crisis is often difficult to fully visualise. Extending into various aspects of our existence, the economic collapse of 2007-8 profoundly reshaped peoples lives and the global economy. Homes were lost, mortgages imploded, cars were repossessed, pensions evaporated, and lives ruined. It’s easy to see the collateral damage, but so much slips by undetected. Despite the seemingly abstract causes (collateralised debt obligation, credit default swaps, and mortgage backed securities), the financial crisis left indelible physical effects in its wake. Penelope Umbrico’s Out of Order attempts to make sense of the crisis in an unexpected place—the sale of used office furniture. At once a portrait of the optimistic hope that fuelled the collapse, the mundane display of desks and plants is also a portrait of failure—the refuse of a crisis.

As an artist, Umbrico appropriates vernacular and commercial images to create her work. Drawing on physical catalogs and online resources like Flickr or Craigslist, Umbrico mines these resources for revealing tropes that speak not only about the way images are made and circulate, but what they reveal about our hopes and desires. A partial list of previous subjects includes sunsets from Flickr, books from home décor and design catalogs, and broken TV screens from Craigslist. In this recent project, Umbrico gathered a collection of photographs of modular office furniture and plants for sale on various liquidation sites shortly after the recent economic crisis. Possibly taken by a former office manager or the site’s employees, the photographs are poorly lit, pixilated, and almost uniformly drab.

At the centre of the work is the contrast between the hopeful promise of productivity embodied in the furniture and plants, and their ultimate failure and mute silence as remainders. While both are meant to suggest and promote productivity, both their poor image quality and subsequent abandonment for resale indicate a deeper crisis or failing. Rendered in inky black-and-white, the desks resemble Modernist sculpture adrift. Curved and rectangular MDF planks become minimalist planes, pixilated and fragmented, extending into space or disappearing into darkness. The person who sat there everyday, as well as their computer and personal affects, are long gone, leaving behind hope-laden forms. Alongside the images of desks, pixelated plants lurk in the shadows, peek around the corners, or stand baldly in the spotlight—pockets of green amidst the beige and gray. The only colour images, the plant form oasis like breaks in the elegantly bleak repetition of minimalist forms. 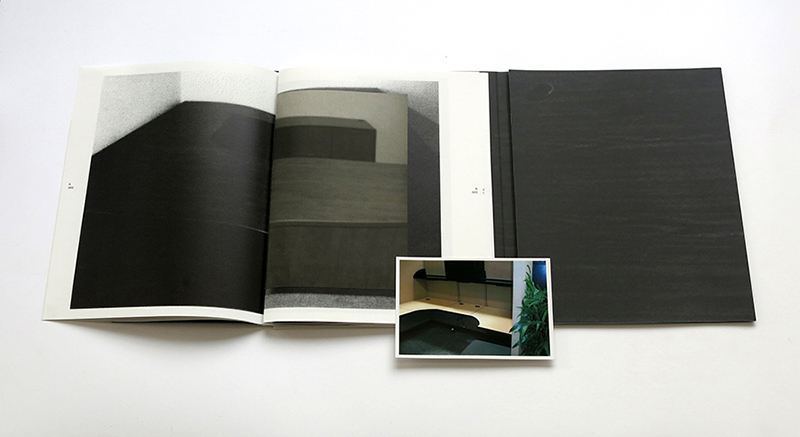 Out of Order is actually the second book Umbrico has created using this same material. In 2010, she produced a small, heavily inked zine entitled Desk Trajectories (As Is) that contained a small portion of the images from the work. Whereas Desk Trajectories resembles a bootleg Tony Smith catalog, Out of Order alters the presentation of the work considerably and expands its scope to include both real and fake office plants. Sold alongside the furniture, they too are causalities of the failed businesses and financial institutions, and, like the desks, were meant to aid productivity. As Umbrico explains, the plants give workers “something to care for in these synthetic modular spaces.” In addition to a short artist’s statement and essay by Clément Chéroux, Out of Order contains a long list, which folds out, of all 489 banks that failed between 2008 and 2013—a sober reminder of the damage wrought by the crisis. Printed in an edition of 500, each book also comes with a small c-print of an image from the series.

Printed using three different types of paper (matte, glossy and newsprint), a variety of different printing methods (offset, risograph, and photocopy), and various paper sizes, the book has a slightly disorienting quality. Unbound, the pages are loosely assembled in a black folder, which on closer inspection is actually a dark, pixelated close-up image of a desk, and held together by a red elastic band. The loose arrangement of pages not only allows their sequence to be changed, but also causes the book to literally fall apart when opened—a fitting design choice given the book’s subject. In sequencing the book, Umbrico nestled each folded signature allowing the images to be broken by the gutter and fold, creating disjointed geometric lines and new shapes. Paging through the book, the desks quickly become disarticulated, split apart along the folds, divided by the gutter, and reshuffled by collation.

While the book is carefully sequenced and arranged, both the title and material variety found in the book invite the reader to make sense of and order the work. Although the book’s name suggests there once was or is a potential order, this is a maddening proposition. Seeing each image clearly either requires one to proceed slowly or to disassemble the book and risk its contents falling further out of order. After all, how do you put the world back together after a collapse? Once the pieces have been scattered, dissolved, and reabsorbed, there is no going back.

Once the first bank collapsed, the last thing on anyone’s mind was what to do with all those damn desks and plants. In any crisis, there are always unseen or marginal casualties. Unlike the people whose lives are devastated, these mute objects and actors may be less photogenic, but also have a story to tell. In Out of Order Umbrico has created a unique portrait of the economic crisis that astutely matches the abstracted nature of its origins. In her parade of vacant desks and forlorn plants, we can see both the promise of future prosperity and productivity, but also their shallow conceit. A sly critique of Modernism and late-capitalism, Out of Order forces us to look at the hollow by-products of our consumerist society and reminds us the real fear is not that we may be unable to restore order, but that it never even existed.