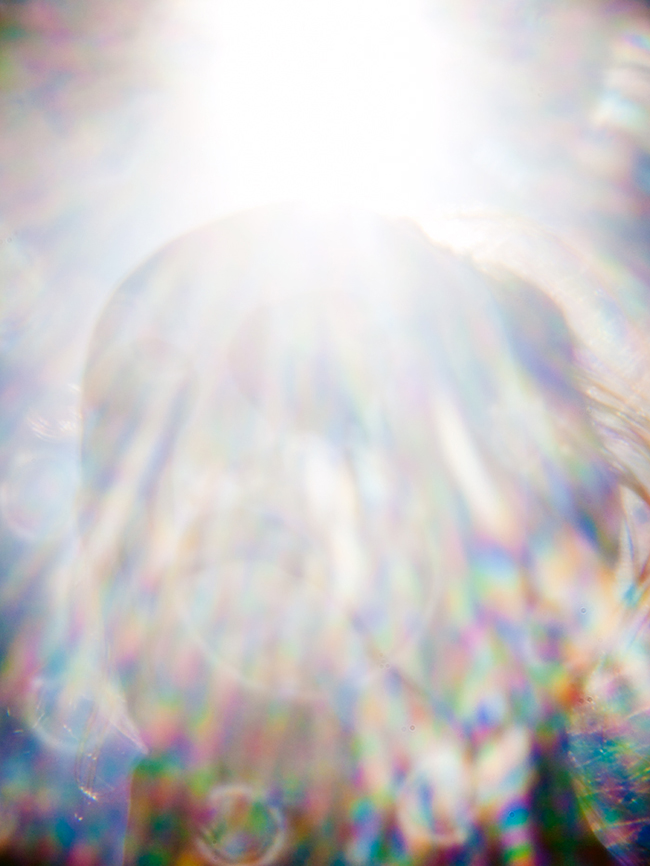 Alexander Binder sits slightly outside of mainstream contemporary photography. His beautiful and raw photographs offer an insight into the world of a lone wolf wandering through forests and deserted landscapes, searching for the otherworldly. Often depicting a vague representation of occult themes, mysticism, and the order of the natural world, Binder isn’t an easy artist to pin down. It’s his illusive nature that first caught my eye when I discovered his book, Allerseelen, and I have since been filled with a number of questions regarding the artist’s methods and personal journey. After years of pondering his work, Binder was kind enough to talk with me about his artistic path, his interest in photobooks, and travels to Southern Europe to work on his most current project, Das Innere.

Antone Dolezal: A few years ago I came across your book, Allerseelen, and was immediately taken by the mystical nature of your work. There is a dark penetrating force underneath it all and I am curious to know how you have maintained such a constant voice? Where did you begin and where has the evolution of your work taken you today?

Alexander Binder: I remember that I felt already in my childhood the presence of darkness and decay all around me. While the other children were playing hide-and-seek in the woods, I stumbled over the dead bodies of animals, discovered cross spiders eating pale butterflies and enjoyed the fine scent of rotten trees.

It’s something like an evil talent – a blessing and a curse at the same time. But with the years I learned to accept it and my creative work is just a means of expressing this peculiar perception of the world. I guess this is the reason why I am able to keep a constant voice in all that I’m doing. It’s not like an intellectual art concept that I am following. It’s much more about the way I feel and see, an unconscious process. I mean, I can modify the setting for my photography, I can explore different topics or I can even switch to different mediums – but I can never change my perception.

So I don’t know if my work made any kind of evolution. Maybe it became a little bit refined in terms of technical aspects, lightning and all that stuff. But the core always kept the same. I am not sure if we need the concept of evolution at all. Sometimes I wished I could live in a cave. Just like a prehistoric man thousands of years ago, and paint the same things again and again on the raw stone walls.

You have mentioned that your work explores the concept of Memento mori – which symbolises the duality of life and the inevitability of death – but your work is clearly more elusive than what we might traditionally think of this concept in regards to art history. How do you feel your work varies and ultimately pushes the symbolism of Memento mori further?

Memento mori had very strong didactic tendencies in the Middle Ages. Painters combined objects of earthly vanity and beauty with symbols of death. On the one hand, flowers, golden dishes, mirrors…and on the other hand, the icons of death: skulls, bones, hourglasses, smoke.

I guess a significant difference between the art of that time and my work is that I allow myself to use symbols that are a little more subtle and not so obvious. And I don’t have to put all the symbols in just one image. So I see the Memento mori aspect not necessarily in every single photo that I publish but in the overall message of a photo series.

And, of course, my work is also more playful. If you have a close look, you’ll find quotes from the black metal subculture, occultism, surrealism, psychedelic art, pre-astronautics and parapsychology in my images. I am not a medieval teacher or moralist, so it’s not too serious…

On your website and in other online interviews I have seen it mentioned that you were born on Hallowe’en. It’s the only holiday my wife and I actually celebrate, so I’m very curious to hear a more detailed account of the significance this day holds for you and your work.

Due to my fascination with masks, gothic literature, horror movies and macabre symbols, Hallowe’en is a great inspiration and also a funny event. It’s the only day of the year, when a lot of people on the streets look exactly like the zombies and ghouls that they are in their real life. There are many interesting theories about Hallowe’en. Some authors think it is a Christian feast with very old pagan roots. I have to admit that I really like the idea that Hallowe’en is a dark pagan tradition, wearing a Christian mask. 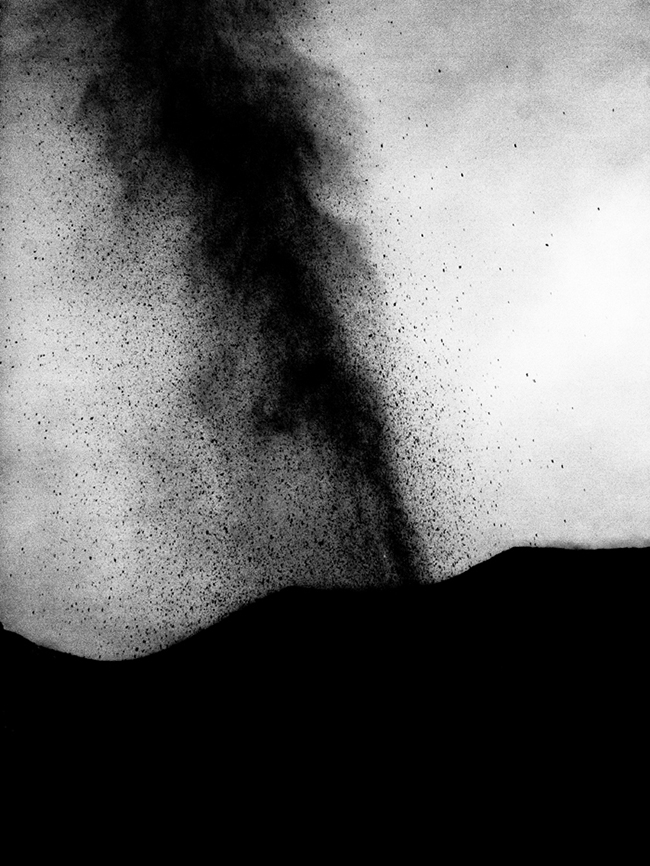 Your work is also inspired by the folkloric stories you heard as a child growing up in the Black Forest of Germany. Are there any specific stories that have stuck in your consciousness and do you view these myths as speaking some sense of truth to the world we live in?

Yes, one story is definitely burnt into my mind. It is called ‘Das kalte Herz’, or ‘Heart of Stone’, and was written by Wilhelm Hauff.

In this story from 1827, a poor woodsman, who makes a living by selling charcoal, wants to be a wealthy businessman and sells his heart to an evil creature called Holländer-Michel. The creature replaces the heart of the woodsman with a cold heart made of stone. So Peter, the protagonist, becomes rich but unhappy and it takes a lot of emotional ups and downs until he regains his real heart. At the end of the story he leads a modest yet happy life and realises that money wasn’t the key to a rich and fulfilling existence. An almost iconic visual idea and a message that seems to me more relevant than ever before. If you changed the surrounding from the Schwarzwald to a modern city, it could be a story about the misleading ideals of our time.

I was recently reading through a collection of German folktales by the Brothers Grimm and was reminded how playful and almost childlike some of the antagonists can be. In some of your work there is a playfulness that comes forward. Did you take a cue from these earlier folktales, or is this just a side of Alexander Binder that inevitably comes out?

I grew up with the stories of the Brothers Grimm and also today I have several copies of their books on my shelf because I really like how different artists and illustrators brought their folktales alive. So the Brothers Grimm must have an influence on my photography. What I love about their work is exactly the aspect that you highlighted in your question: the antagonists are childlike, almost ridiculous  but at the same time frightening, and they are arousing fears hidden deep in our subconscious.

My better photos also combine these two sides. Even though, some people describe them as not academic enough or kitschy – these images transport a dark and sinister energy directly to your brain.

Considering the work you’re making you must be opening yourself by some degree to an otherworldly/mystical force. Am I correct in my assumption, and if so is this experience something you seek out through the act of making your work?

Your assumption is completely correct. I don’t know if it’s an otherworldly force, but at least I have to get into a certain mood. Some state of perceptual hypersensitivity.

A few years ago I started with meditation and it helps a lot. I also use to listen to music from Gustav Mahler, Sunn O))) or Blanck Mass. At the end of the day it’s all about switching off the analytical part of your mind and experiencing your environment without rational control. When I began with photography, this experience was just a necessary ‘tool’ to create my work. In the meanwhile the whole situation has changed and now my photos are more or less a mere documentary of this experience.

You have published a number of books and zines. What makes the medium of the book so valuable in the presentation of your work?

I like the illustrations in storybooks and I admire the comic art of Jean Giraud. The idea of conveying a message with a whole sequence of images appeals to me. It gives you a lot of space and creative freedom to develop your own worlds.

The obsessive focus on just ‘one perfect photo’ sounds completely absurd to me. Nobody would reduce a masterpiece like The Lord of the Rings to just one word or a sentence. Of course, there may be some highlights within a long text, but a novel just based on these elements sounds pretty boring. Not to forget that books also add a tactile, physical dimension to the photos. The choice of paper, the size of the book, the number of pages, the print quality and the cover material heavily influence your perception of a book. Last but not least I like the idea that a dusty, rotten copy of one of my zines may be found behind a bookshelf in several hundred years. 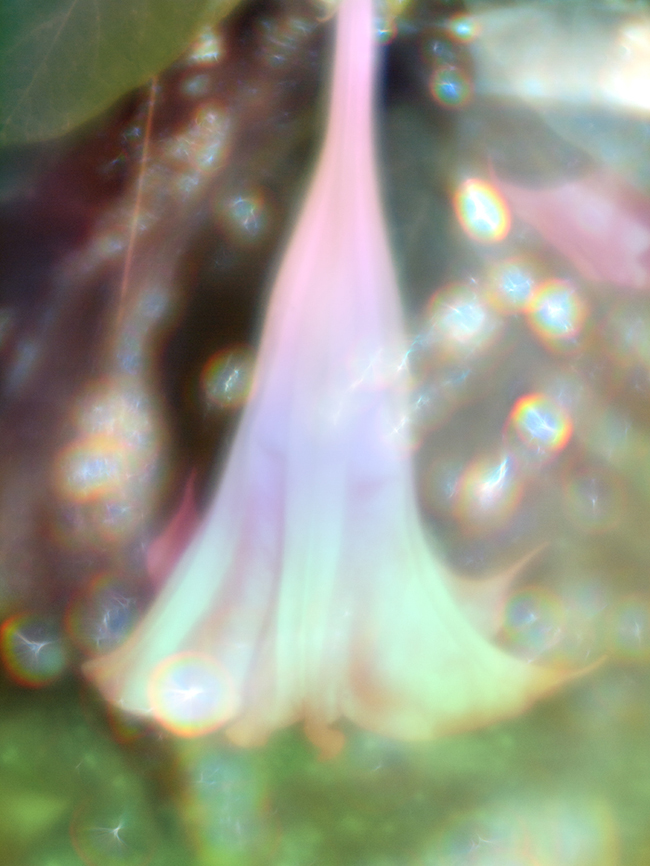 You recently had an exhibition at Lookout Gallery in Warsaw for your new work, Das Innere. The work was a different direction for you in terms of where you were finding inspiration. Can you tell us more about this work and the meaning of your travels to southern Europe?

I got much attention for Allerseelen and Ultrawald. So many people thought of me as the ‘Schwarzwald guy’ with a passion for backwood slasher movies. This may be true to a certain extent but I always loved to travel. Southern Europe – especially Italy, Sicily and the Aeolian Islands – have been on my wish list for a very long time.

With Das Innere I followed the traces of artists like Hermann Hesse and Richard Wagner to Italy. Even Aleister Crowley spent some time at Sicily in the beautiful town of Cefalù. This made me very curious and I also wanted to dive into the sun-drenched Mediterranean atmosphere.

Especially at Stromboli I found an almost surreal landscape characterised by black lava, glaring sunlight and diabolic volcanic eruptions. These eruptions completely caught my attention and also led to the title of the series. ‘Das innere’ can be translated as ‘the inner’ or ‘interior’ and refers to the magmatic core of the Earth, which played a central role for my latest series of images.

What are you working on now?

I am working on several projects simultaneously right now. One photo project will be a follow-up of Allerseelen. A psychedelic ode to the woods and the creatures that are living there. The other body of work is centred around the same emotions and ideas – but looks pretty different. I don’t want to promise too much in advance because it’s not really finished yet. It will be more abstract than everything I have done before. In a certain way I am also dissolving my focus on photography in its traditional sense. I have been experimenting with these new ideas since 2008 and it took quite a long time until I felt happy with it. So for me it is not really new, but nobody else has ever seen it before.

Thus I am looking forward to the reactions… I am sure that some people might be disturbed. Nevertheless I think that 2014 or 2015 is the right time to release the new work. 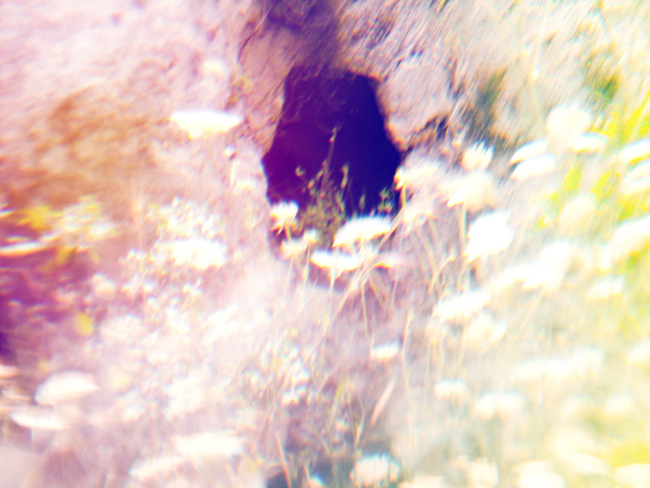 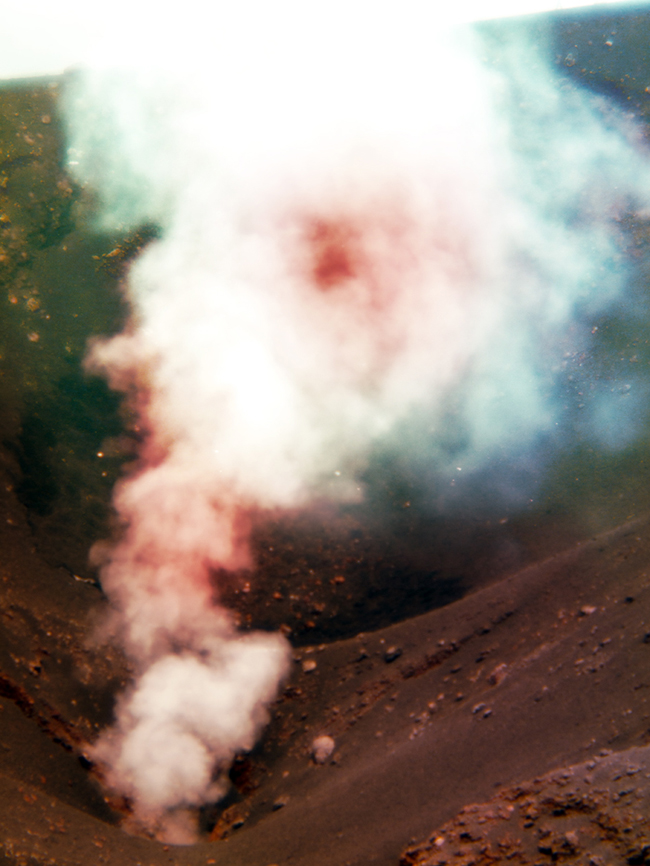 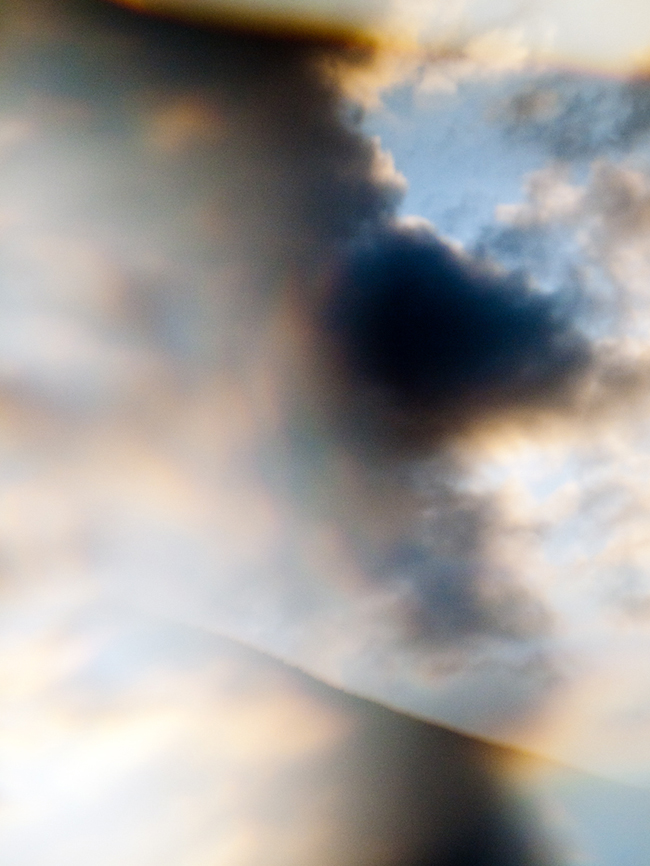 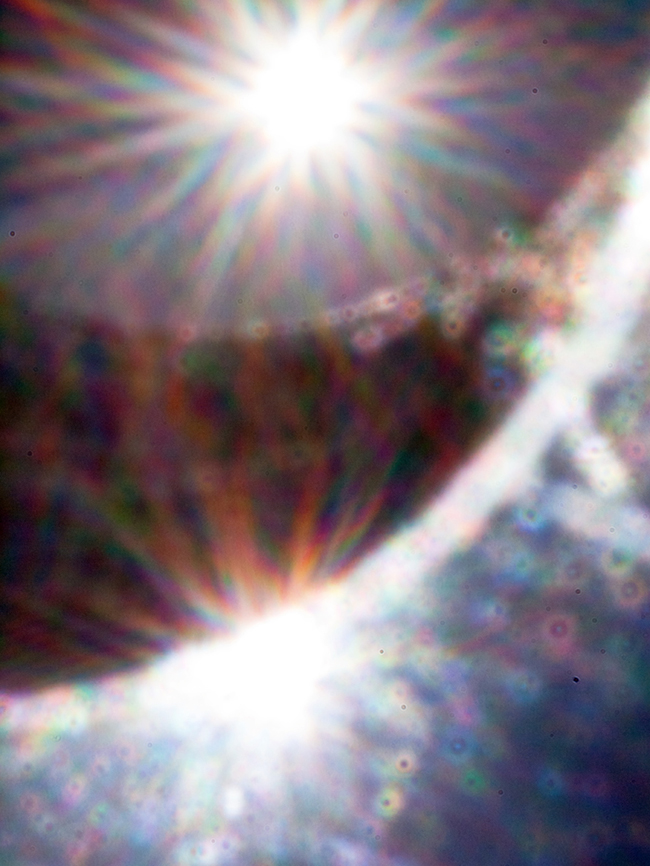 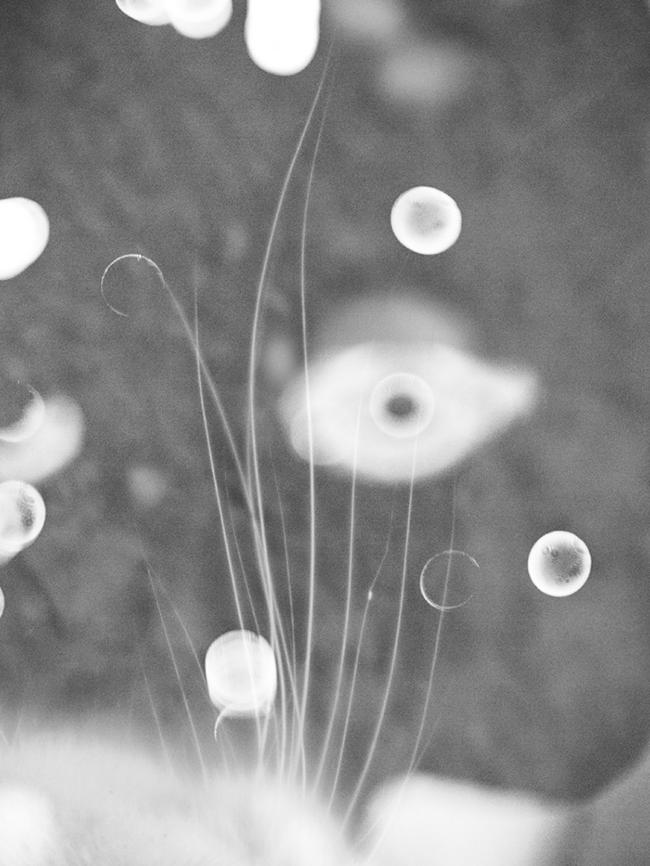