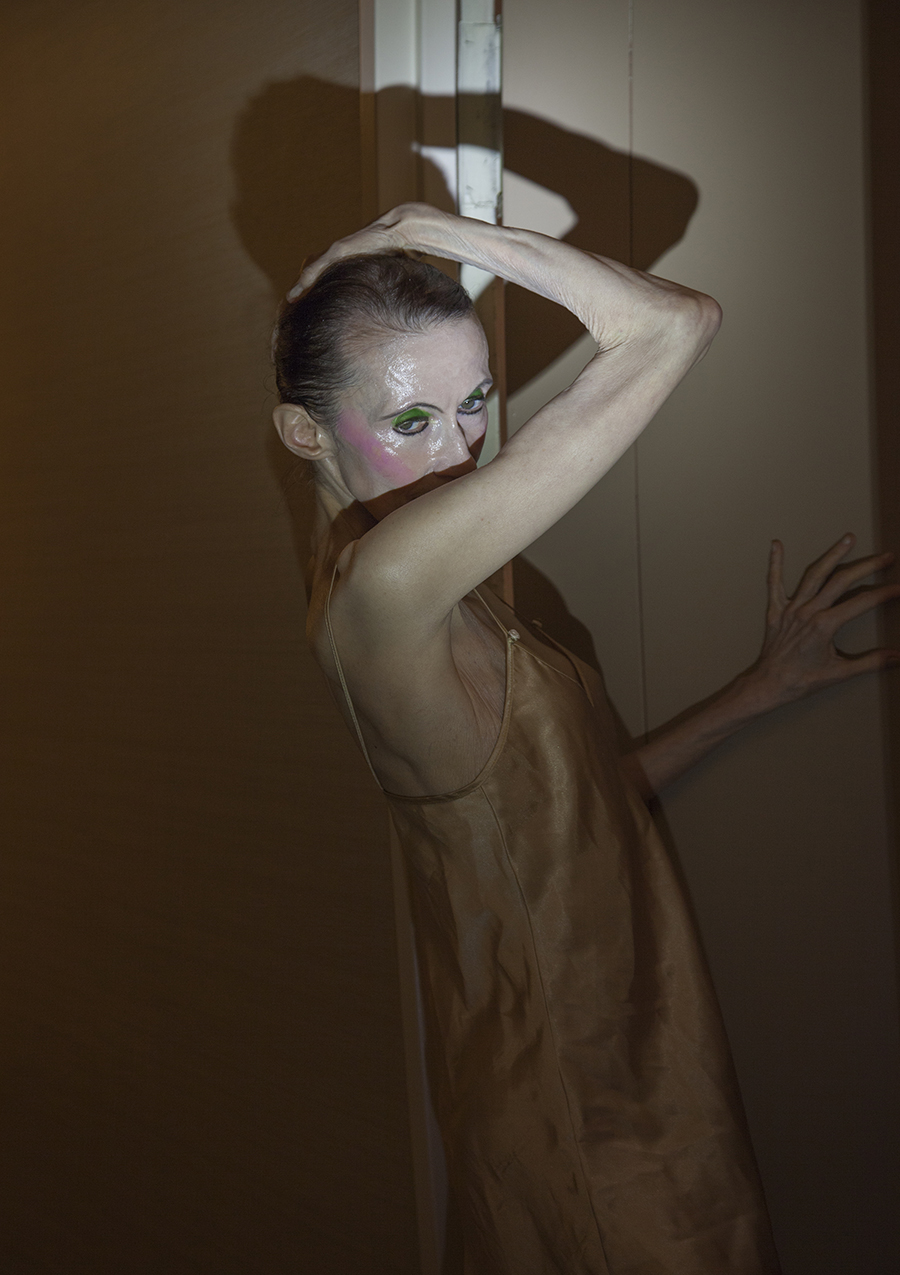 Elizabeth Bick’s chance encounter with Linda Leven on a subway journey in New York led to a year long collaboration resulting in the self-published and aptly titled, Coda. The title stems from the dance terminology of the same name, which signifies a concluding event, remark, or section. With this in mind, Coda can then be described as a performative visual essay (in novel size) exploring Leven’s life work and its legacy, alongside questioning Bick’s roles as photographer, thus raising important (and at times) ethical questions on collaborative practices, especially in this instance where the photographed subject, Leven, a former ballet dancer, juggles between the roles of artist-novelist-model-actress, has self-documented and amassed a staggering personal archive of images over decades.

Leven is iconic looking and captivating. Curious and intriguing, with a body that breaks with normalised views of an older female body. Initial reactions to my viewing the (sadly) digitised version of Coda were profound, particularly bearing in mind the novel-size of the publication.An intimate engagement with the highly personal that also has interjections of the photographed subject, i.e. re-photographed existing Leven images and texts from her self-published novellas concretisies the collaborative nature of this publication. This overarching drive is one that Bick observes as ‘Leven’s desire to leave something meaningful behind’. A publication seeking to do justice to this desire as well as contemplate an individual quest for recognition as an artist staking a claim for visibility in a world that harshly renders certain bodies visible, whilst ones that do not conform are marginalised and sidelined.

In his text “The Presentation of Self in Everyday Life”, Erving Goffman describes the roles inhabited by the performer and in one instance he identifies: at one extreme, we find that the performer can be fully taken in by his own act; he can be sincerely convinced that the impression of reality which he stages is the real reality. When his audience is also convinced in this way about the show he puts on —and this seems to be the typical case —then for the moment, anyway, only the sociologist or the socially disgruntled will have any doubts about the ‘realness’ of what is presented.

Coda leaves it up to the viewer to grapple with wider issues of the real and performed self that extends beyond the individual we see represented here but into wider constructs of identity and the ‘selves’ we project in our everyday encounters. I spoke to Elizabeth Bick about collaborative practices, self-publishing and ethical considerations of works that mediate between the real and imagined, fact and fiction. 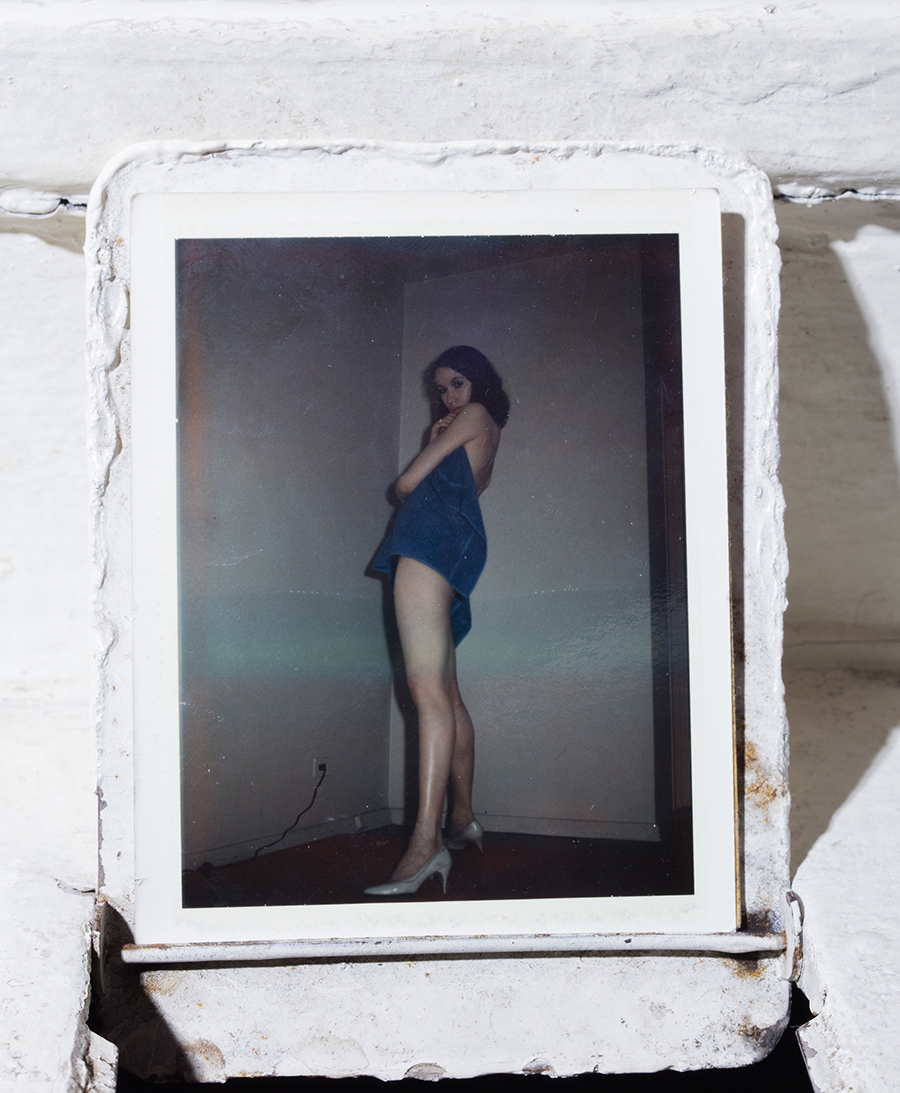 What a discovery and chance encounter with Linda Leven. Did you have initial apprehensions about documenting someone who has amassed such an astounding self-led manner of documenting her every day?

I was struck by Linda’s appearance. She is a theatre ready persona and I was drawn visually by her and the sense of how she represents someone who performs ‘herself’ every day. After we got in contact she requested to shoot at home in her apartment and discussions ensued about how to photograph her whilst taking into consideration that she had spent such an extensive period of time self-directing and self-documenting with the photographer Lance Lee, as well as being photographed by other people, including Tanyth Berkeley, Annie Collinge, Hart + Leshkina, and many many others.

What ethical challenges did you face in turning the lens to someone who was clearly quite used to and documenting her ‘self’?

I wanted to think differently about how to capture her image within the interiors of her own home in quite a restricted but personal space, while focusing on the aspect of her as a performer in the pictures. This is where perhaps an ethics revolving around portraiture comes in. How does one represent something specific through a photograph that is unique than what has been captured by others? and how does camera allow me document people who I wouldn’t normally encounter? In capturing Linda also, this wasn’t just about surface theatricality and even though there is a willingness to pose, I discovered that Linda’s drive to be photographed is strongly motivated by wanting to leave something significant behind and I became deeply invested in this intention.

How can I use what I have to leverage her desires through a collaborative vision whilst respecting and taking care in providing a platform for showing what you want to be left behind?  I thought about an ethics of bodily self-ownership and how she might be represented in a way that has not been represented before even though she sees her body as a canvas and does present it an open way, like an open book perhaps. 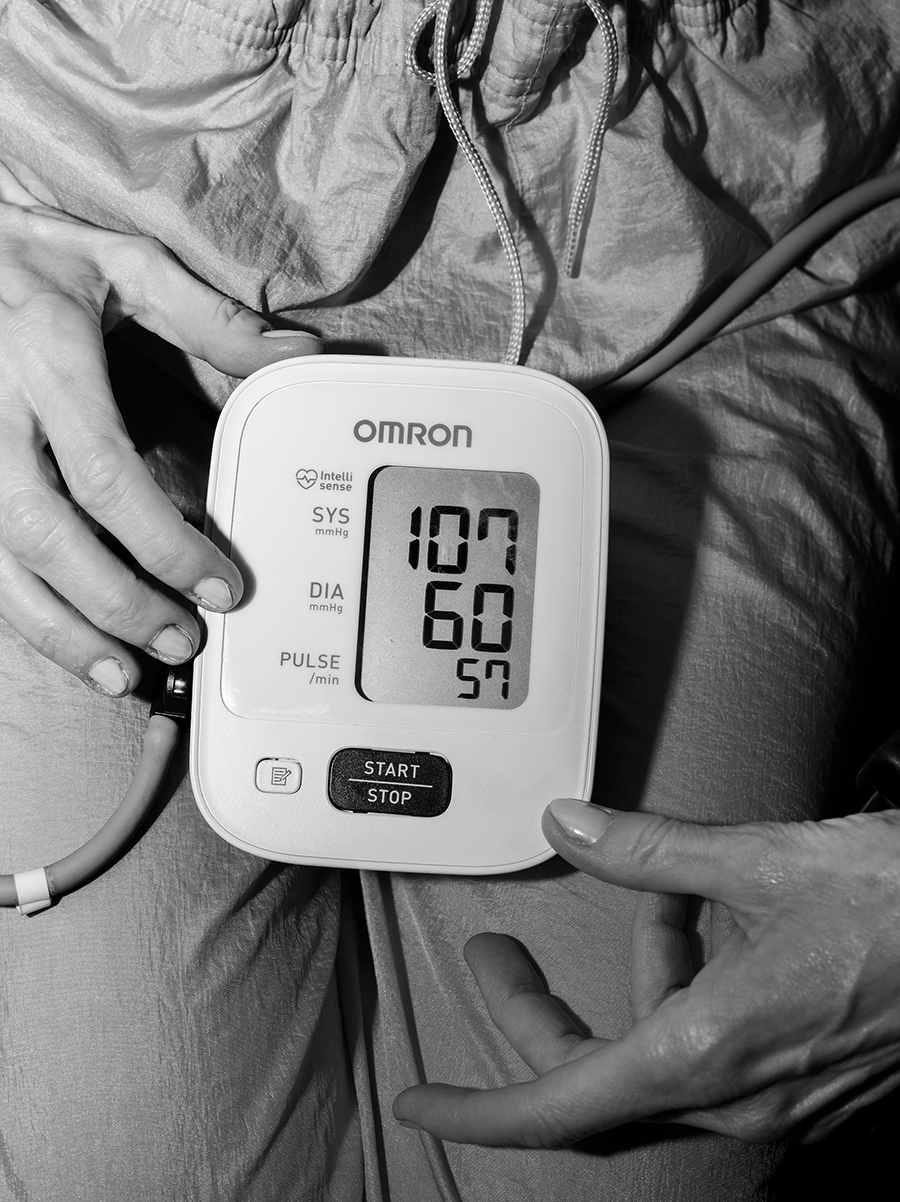 I am interested in this idea of how Coda creates a wider audience for a body that doesn’t conform to normalised ideas of beauty – an older body, a body battling with health issues and the ageing process. This is not one we usually see and how do you feel the publication perhaps acts a way of increasing visibility of a non-conforming body?

Erving Goffman’s text titled “The Presentation of Self in Everyday Life” inspired and informed a lot of the project, as he contemplates how we perform ourselves in everyday life. I was trying to represent how Leven can be depicted in both extremes of performance vs non-performing to consider how much of this can be revealed and hidden in a photographer.

How can we reinvent this very small and cluttered space through ambition and determination? In these physical and spatial constraints, I found freedom from my normal working methodology. We were going to make significant work in this tiny space so let’s determine what’s possible. We spent Friday afternoons working together and this fitted into Linda’s routine. Playing dress up and posing for pleasure which she has done for decades so she is in control and knows exactly how she looks and what to do.

Why is the book titled Coda and how did you arrive at realising this project as a book and not as an exhibition?

Coda, in dance, is ‘the concluding section of a dance, especially of a pas de deux or the finale of a ballet in which the dancers parade before the audience’. I thought of this publication as a way of making Linda’s work permanent to concretise her intention of making her life’s work a lasting legacy. I was also struck by her willingness to hand over herself as a canvas and allowing, or rather giving me permission to enter into her world and what this might mean for transferring this personal narrative to a different context – perhaps as a way to ensure story is told in a meaningful way and give it a sense of timelessness. There is something about her willingness to do this that reveals she has a sense of removal from her clothes, her space, which is how one feels as a performer.  She is a talented writer, but like many talented people, has not received the attention she deserves.

Self-publishing made the most sense for this project. I didn’t want to have to convince someone to validate the work and it fits in naturally with they the way she has been creating her own work. As it was my first book, I learnt a lot from Linda about self-publishing and there was a lot to research. The novel size of the book reflects Leven’s career as a novella writer.

In my practice, I am also at a stage of contemplating what it means to leave something behind. So, in the end, this project served as instrumental good for how one might use work to leverage these issues that mirror my own concerns as an artist. I should add that Linda wrote all of the novellas in Coda after I met, she worked quickly so there’s a sense of running out of time and getting things done in the time one has left.

How did you come to the decision to re-photograph Leven’s work that we experience in the publication and how did that come about? Was it meant to extend the project or situate more as a collaboration for the book or a way to include Leven’s voice, as it were, in the publication?

I needed to in a sense capture the agency of the work and challenge the normative roles role of photographer and subject. In some instances, I could capture an image that was better than what already existed so I took the decision to include some of these images in here. These found pictures also show a chronology of how she has aged and also situate a young version of herself looking at its mirror, older image observing each other across time and space. The whole thing is quite fictional in a sense, life interweaves with the fictional representation especially in the novella texts included. Her novellas mediate on the body’s mortality but they also seem very personal and almost self-reflective. The texts and images are in conversation.

There is a performative fantasy of fiction in some of the images and what lies beneath the fictional self. The body of work also highlights deeply personal images from Linda’s personal archive. I embraced this element of fantasy inherent in this publication. There is sincerity in the way Linda operates as an artist, as the subject photographed etc. We had a very open dialogue through this project – equally light, equally heavy. I made work with someone coming to terms with their body’s transformations and fragility, but through an elegant physical expression. 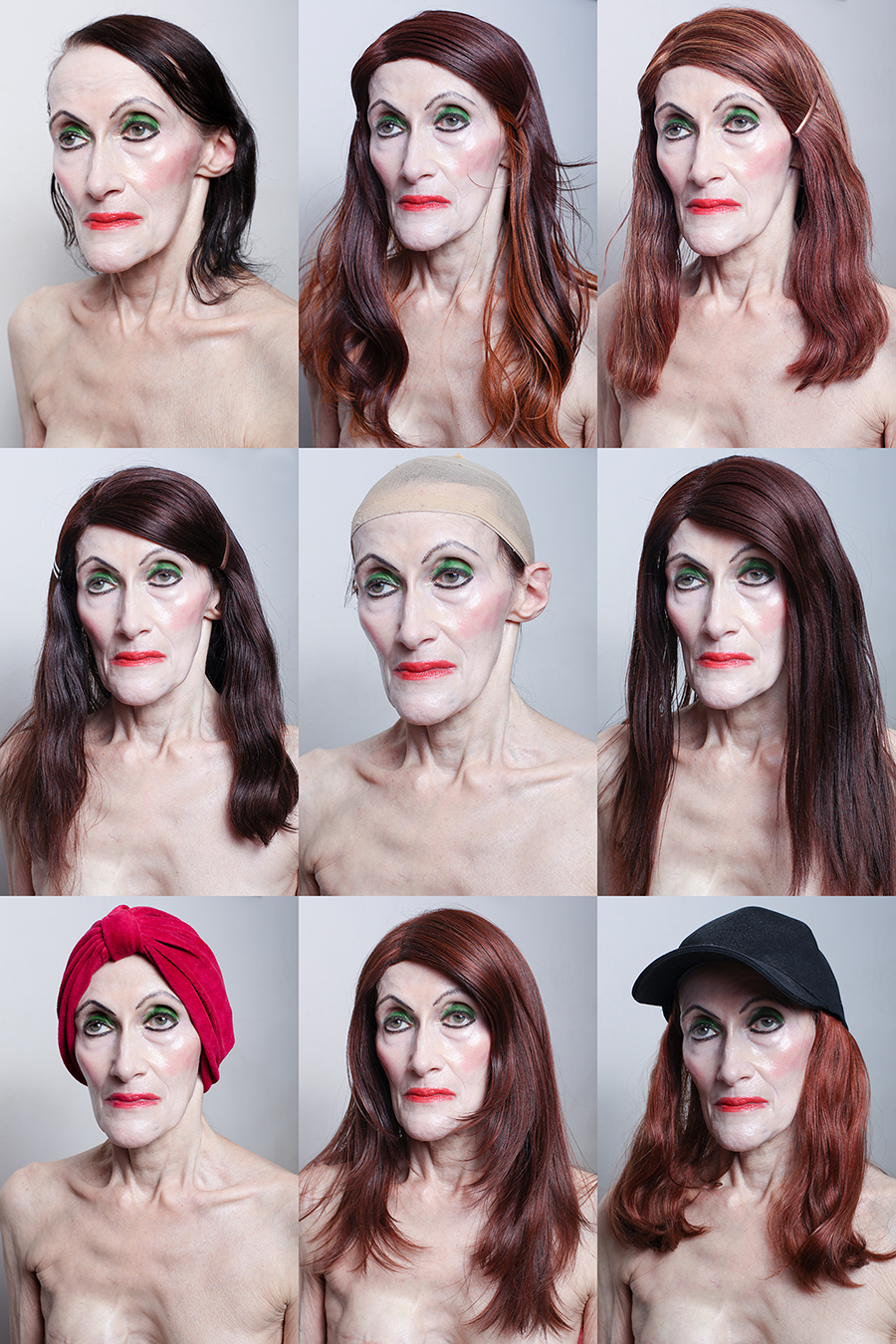 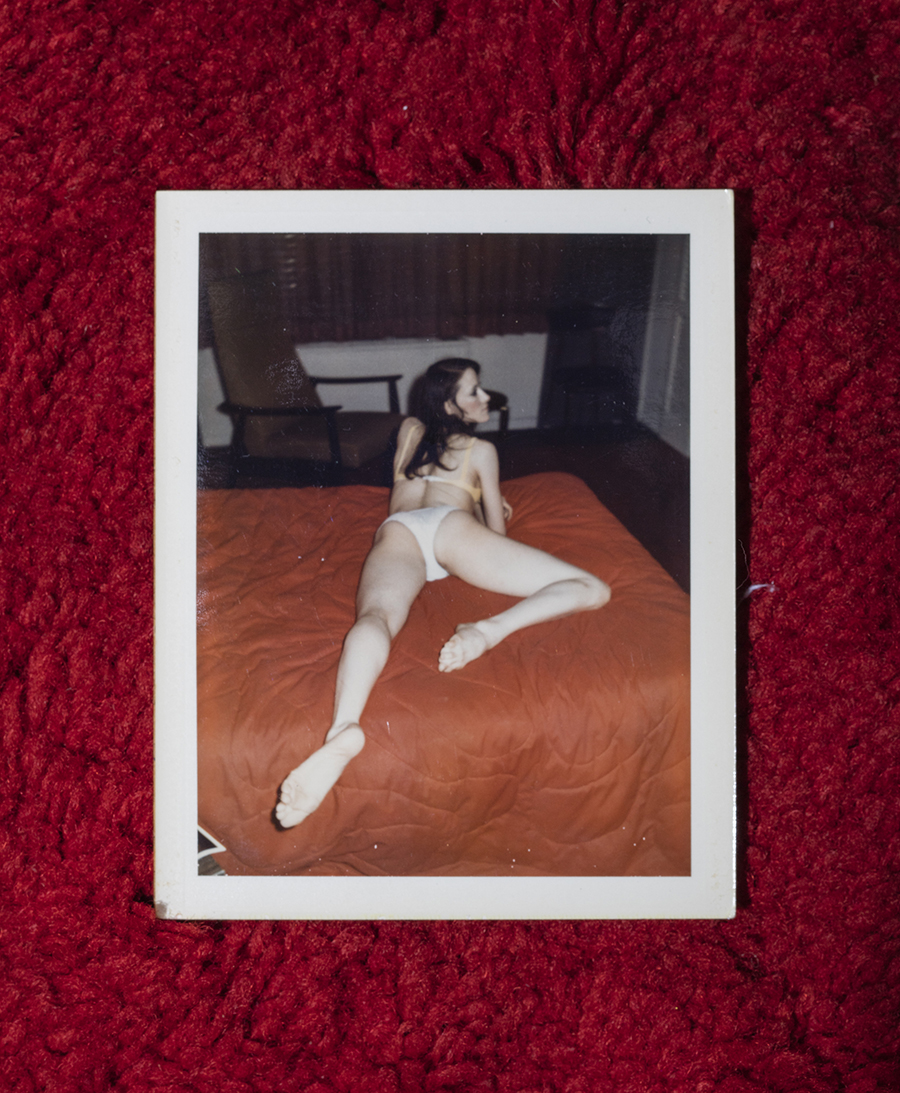 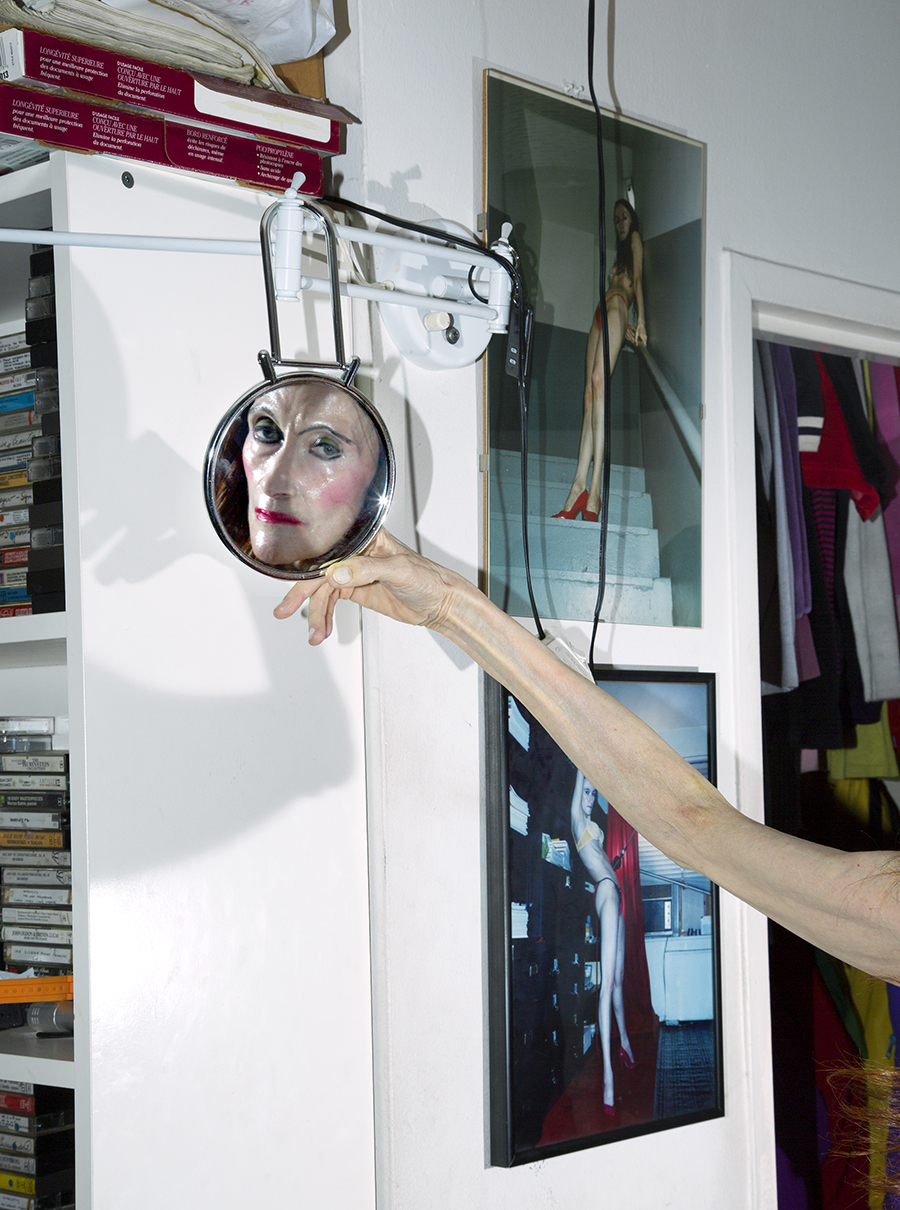 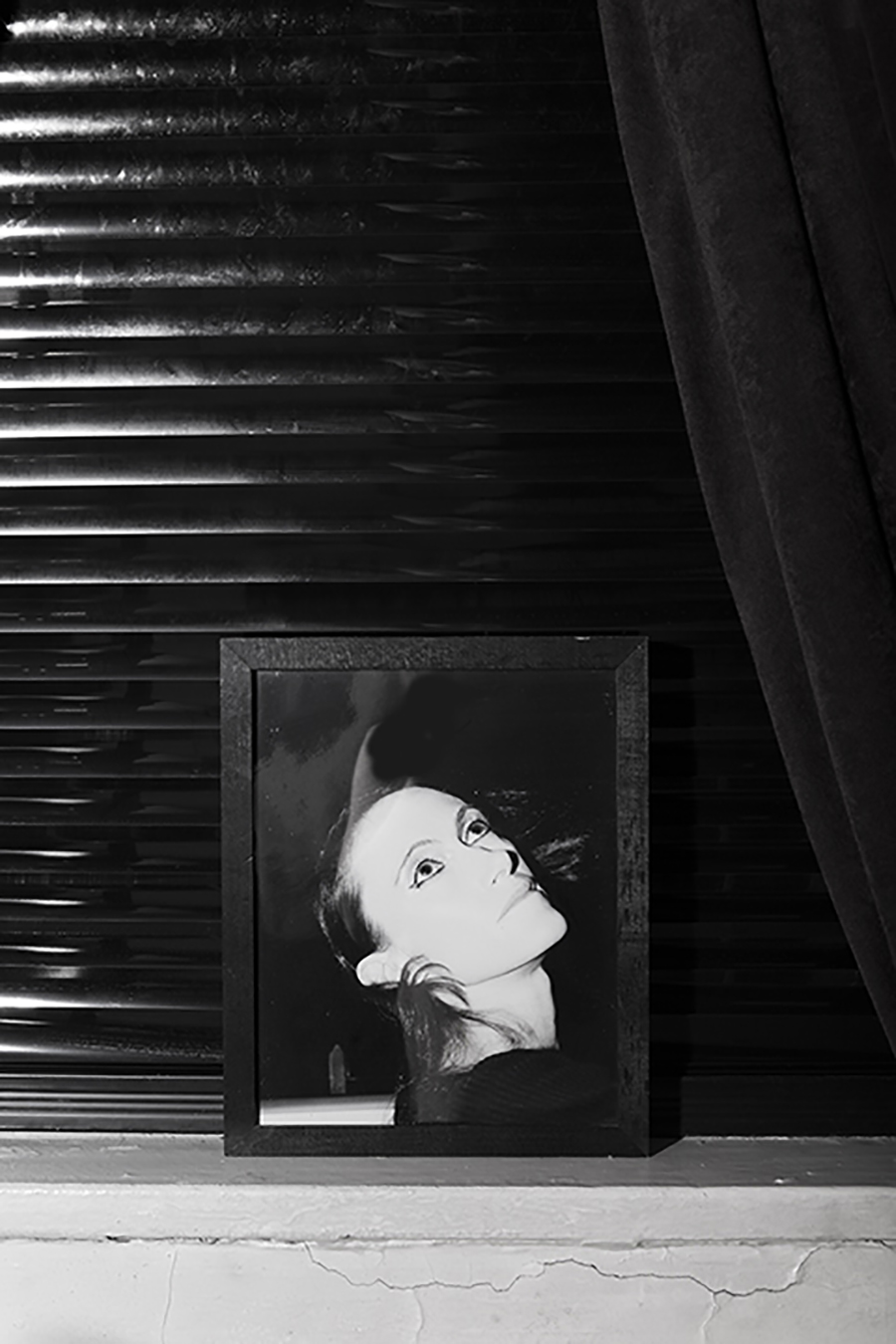 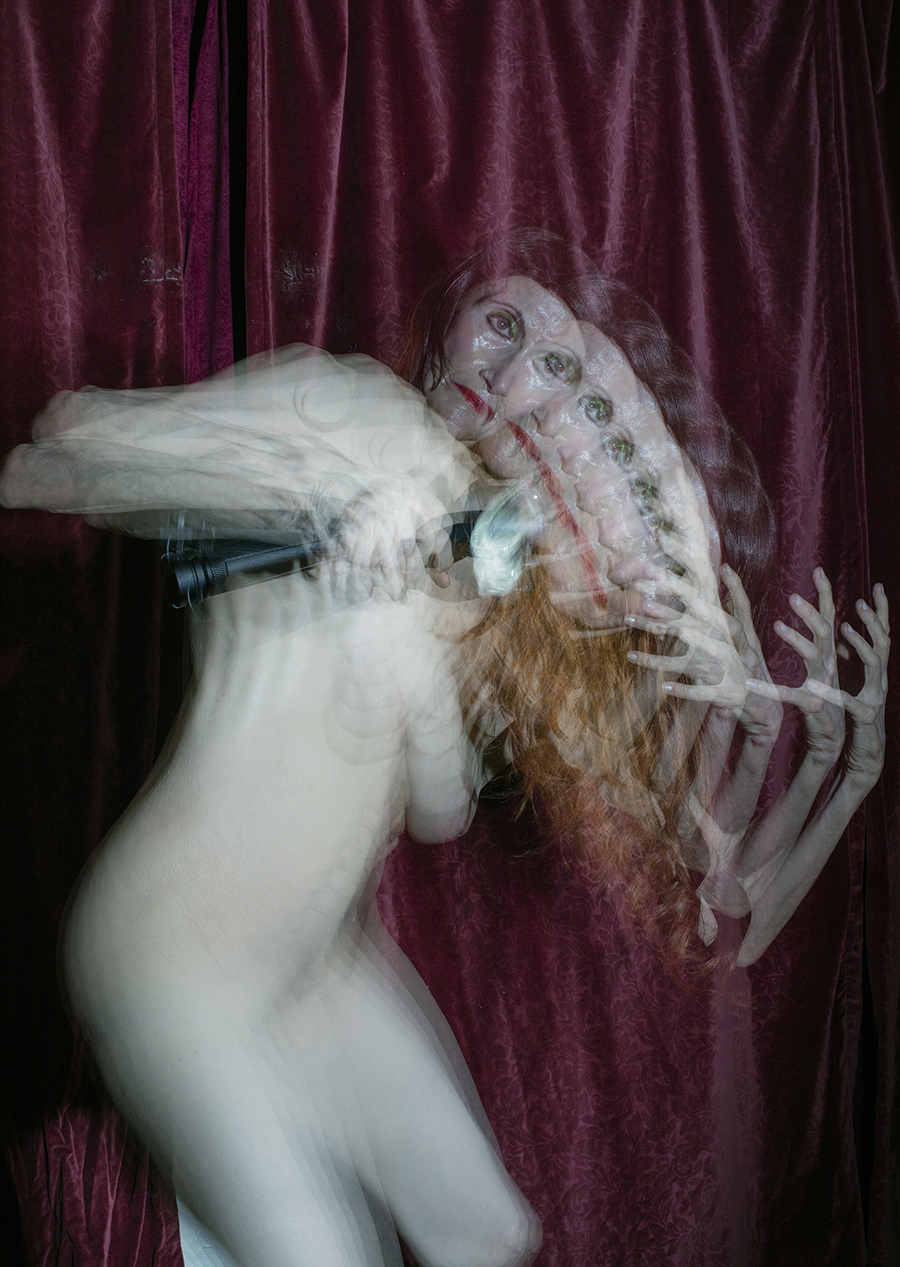 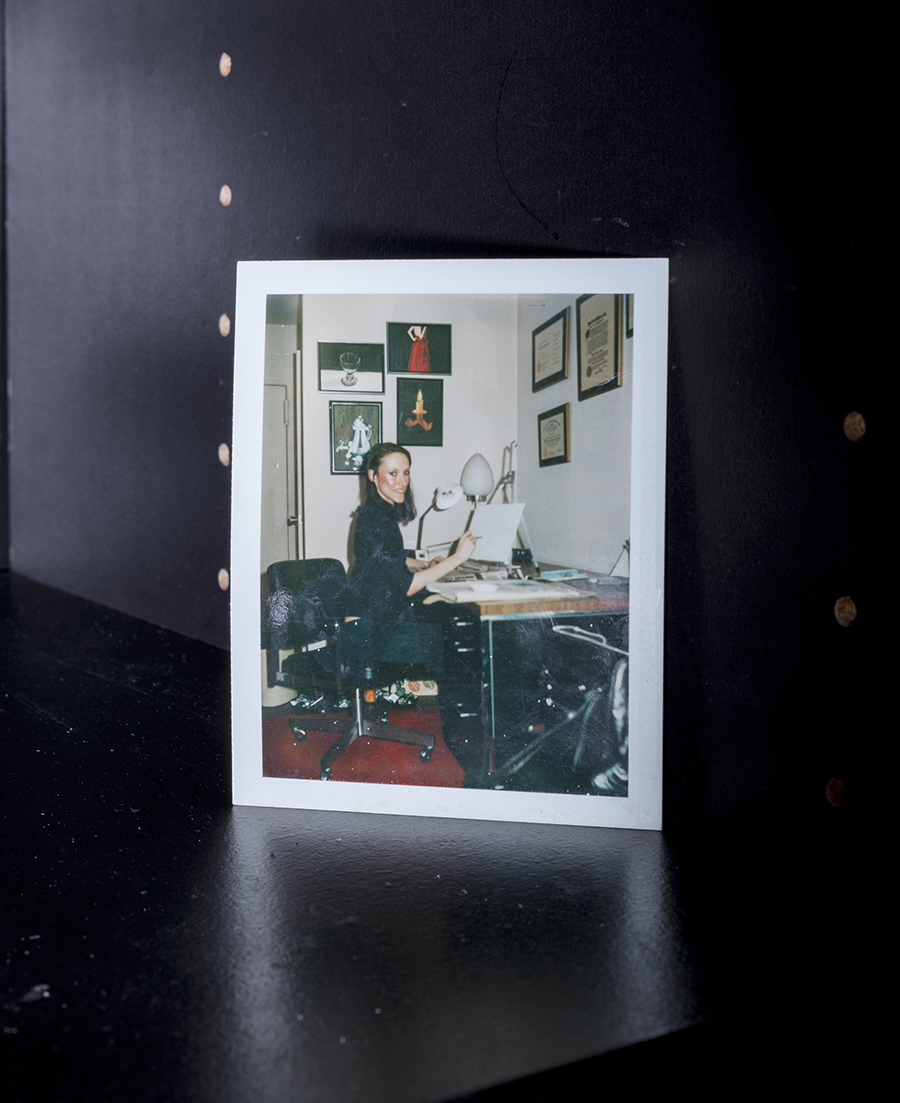 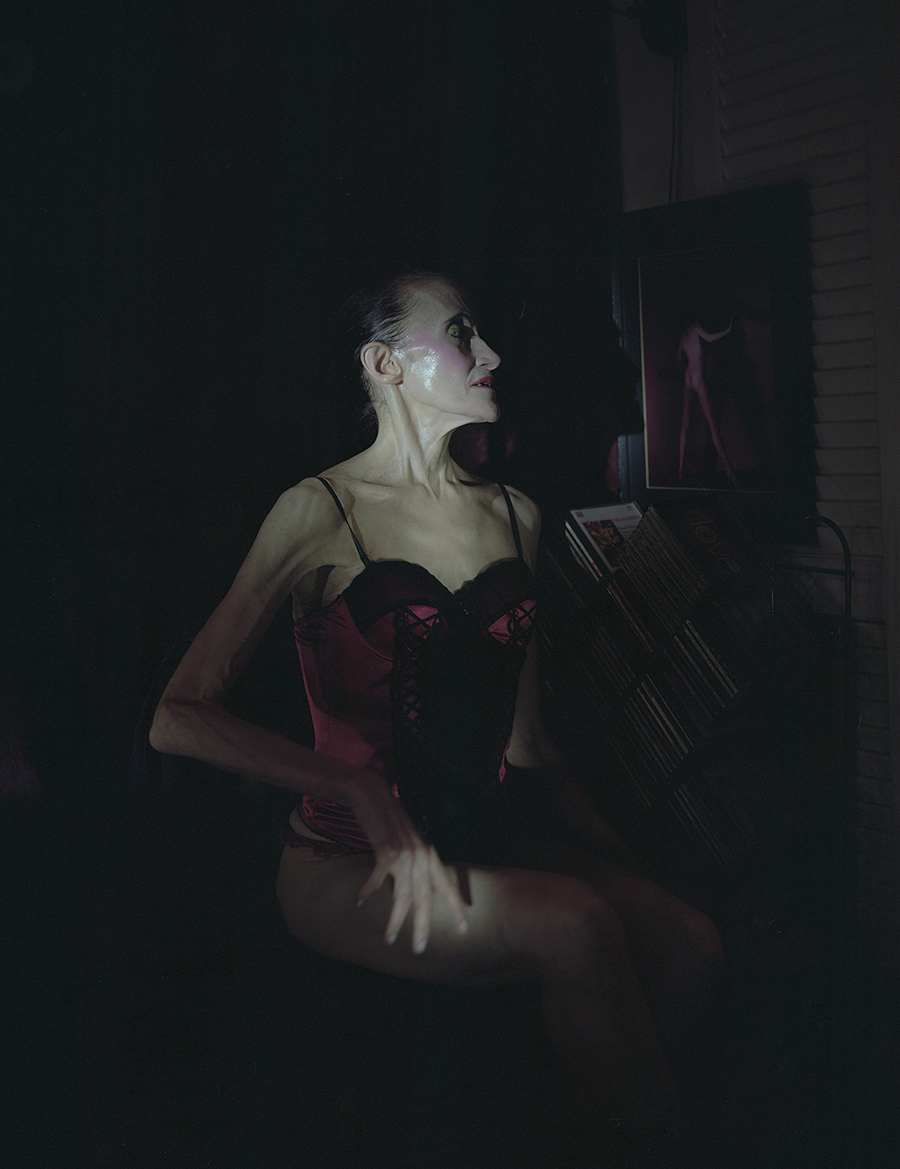