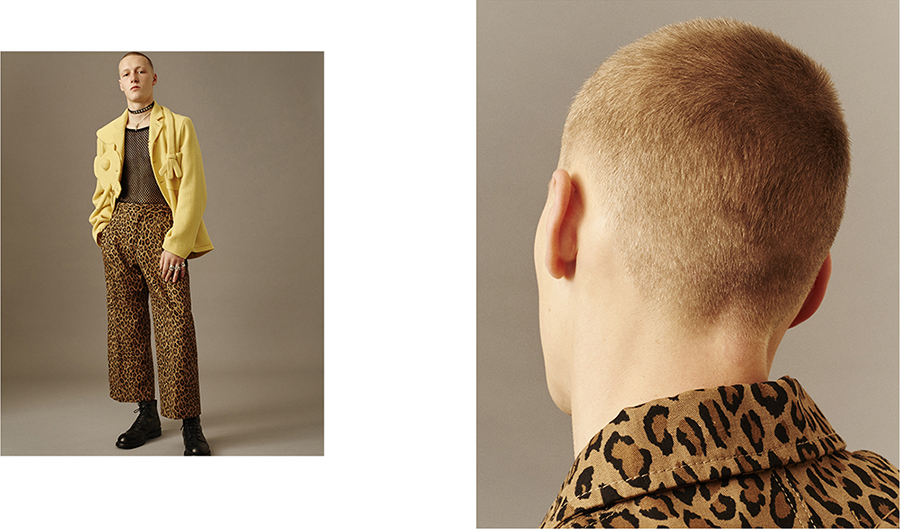 Belgian designer Walter van Beirendonck has been pushing the boundaries of men’s fashion for well over 30 years, having launched his eponymous label in 1983 after he completed his studies at the Royal Academy of Fine Arts in Antwerp. He gained international recognition in 1987 as one of the new wave of designers termed The Antwerp Six – including Dries Van Noten, Dirk Van Saene, Ann Demeulemeester, Marina Yee and Dirk Bikkembergs – who thrilled the fashion press when they unleashed their collections in London.

Throughout the subsequent decades, he has proven himself to be a rebel with a cause – a rejector of banality – exploring within his work big themes about identity, technology, ecology, terrorism and sexuality, but always doing so with wit and colour, an eye for texture, cut and form, and an unabashed sense of mischief.

There have been times, during the past four decades, when van Beirendonck’s vibrant and cartoonish aesthetic has not fitted neatly into fashion consumers’ preoccupations  – he seemed out of sync with the dominant craving for luxury or minimalism, for example. Despite this, he is a designer who has stuck to his creative guns, keeping his credibility intact and clearly influencing younger designers – such as Bernhard Willhelm, Cassette Playa and Sibling, to name a few – along the way. This bold stance has now paid off – his many stockists are among the most prestigious around the world; museums, publishers and galleries clamour to collaborate with him; critics who once lazily deemed him ‘Wacky’ now value his individualistic approach. Van Beirendonck has retained his long-term loyal fans while simultaneously wowing new generations of enthusiasts with his latest collections and shows, not to mention his archive – much of which can be found online and still looks remarkably modern.

Bearded and stocky, van Beirendonck cuts a formidable Hells Angel-like figure. Yet he is friendly, softly spoken, enjoys the simple pleasures of nature and – when he is not busy designing, or overseeing students at Antwerp’s Royal Academy of Fine Arts, where he is Head of Fashion – he likes pottering about in his garden. Who better, then, to opine about non-conformity, rebellion, revolt and resistance than the Gentle Giant of Fashion himself?

When you were a teenager, who were your favourite famous personalities that epitomised resistance to the mainstream?

I grew up and started to discover the world when Glam rock was on a high. I found David Bowie fascinating, he was doing everything I did not dare to do yet at my age. I realized through him that clothes and looks were a big communicator, and he was the main reason that I was attracted to fashion, and one of the reasons why I became a fashion designer.

What was the most rebellious decision or act you made during these formative years?

The decision to go to the Antwerp Academy and start to study fashion-design. At that time  – around 1976 – it was very uncommon to study fashion design, surely not in Belgium. It was a choice which was a big discussion with my parents, as it was not considered as a serious profession. But I did it and once I started my parents supported me a lot.

Which designers did you most respect for their uncompromising creative stance, when you were a fashion student? And which of today’s designers do you find most exciting, for similar reasons?

Exactly the years when we  – the six, plus Martin [Margiela] –  were studying in Antwerp, amazing things were happening in fashion. It started with the rise of Versace and Armani in Italy, then Jean-Paul Gaultier, Mugler, Montana, Andrevie, Beretta …. a new french generation arrived, and the year after Comme des Garçons and Yamamoto arrived from Japan. There was an amazing fashion-energy. New, strong individual styles and statements were all over fashion. Creativity and expression was the key-word  which was electrifying and which gave us wings to believe in the impossible. I still believe in the power of fashion and I have a strong respect for independent designers doing their own thing, without limitations. Rei Kawakubo was and is one of my heroes, but I also respect new young designers such as Graig Green, who are searching for new ways to express themselves. I hate copycats and I think that the big money companies are fucking up the fashion world.

You have consistently resisted the obvious cliches of fashion and its seasonal trends. Has there ever been pressure upon you – from buyers, in particular – to dilute your ideas and make them more commercial?

I was always working in a kind of  niche situation in the fashion world.  I feel like an outsider who is active in the fashion world and I do like that situation. It gives me freedom and the possibility to do what I want. While working under my own name, in the ’90s and after 2000, I built up a strong following of loyal shops and customers who have a belief in what I’m doing and they appreciate the collections, with every time new ideas and fresh statements. They are strong enough to follow me and bringing the new is what they expect from me. On the other hand, there are not so many shops in the world who have that attitude and way of working, so growing isn’t that easy. The nice thing is that younger generations keep on discovering me – they were not born when I did my first collections and they are fascinated by the collections I did.

You are one of the very few designers who has always underpinned your work with political and social messages and commentary. Do you believe that fashion still has the power to effect meaningful social change?

Because I see fashion as a communicator, I communicate through my collections. The names of the collections, the slogans, words and prints are strongly connected to our world. Political and social messages are hidden or very visible, depending on how I want it, because I do enjoy to use my work as a canvas, to tell the world what I think. I’m not saying that fashion can or will change the world and will solve the problems, but I think that every person who has a voice should talk and use his voice to tell the world – to try, at least –  to make it a better world. I always had respect for Katherine Hamnett and Vivienne Westwood, who did and do use their collections the same way.

The slogan, STOP TERRORIZING OUR WORLD, I used the first time in the STOW collection years ago, and I brought it back right after the attacks in Paris, as the opener of the show in Paris. It became a statement on social media to use these images and they came back on social media, after the other attacks. People are using it to express their feelings, and reflect their opinion. 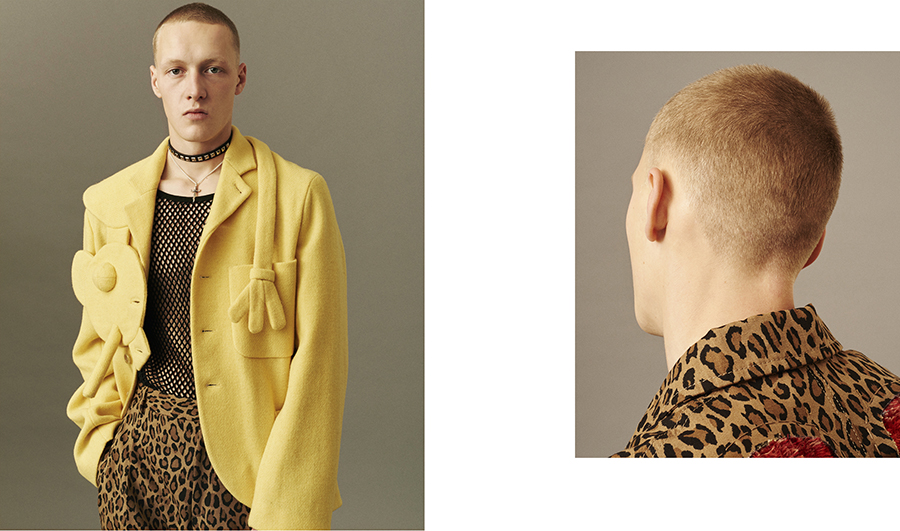 You were one of the very first designers to ever utilise and draw inspiration from the internet, at a time when the fashion industry still did not understand, or even resisted, this new technology.  Now that the internet is so ubiquitous and has so massively changed the ways in which we view and consume fashion, how do you feel about it? What are the advantages of the digital world – and the disadvantages?

The internet and the digital world was an amazing discovery, back in the ’90s. When I read the fantastic book, Snowcrash, from Neil Stephenson, I was totally fascinated by this new digital world and avatars were my new heroes. Making the first websites and cd-roms was a fantastic adventure I enjoyed a lot. We did live-streaming of the W< shows already in the ’90s! It is a fact that this digital communication changed the world, for good but also for bad. I love to research, google and jump from one subject to another, as I know the stories behind, besides the physical books I look into daily. But, I see that younger generations don’t know anymore who is making what and how images are connected to stories and persons. They should invent a Deep Google possibility, that makes the research less random and superficial. Also, the fact that shows on internet sites, twitter, instagram are concentrating on the front of the garments, and that colours, prints and structures are selected by designers for the impact on this small phone screen or computer image is rather stupid. Garments are ‘designed’ to sell online. That’s why we have a big loss of tactile enjoyment. Fascination and respect for construction and quality of fabric, techniques and finishing is completely  gone on these online shops. Time will tell. It is all fascinating, but digitally we still have a long way to go to make it as good and strong as ‘the real thing’.

What are the key messages you convey to your students at the Antwerp Academy, in terms of how they can resist conformity, while still enabling themselves to become employable or commercially viable in the future?

The most important for my students and me is to raise and form them as strong individual designers, with a strong vision and voice. These strong characters can make it anywhere. They probably will do a ‘try and error parcours’, but they will be strong enough to survive. As we – the school and teachers – never know in advance on which level or in which fashion houses they will perform, we raise them as high as possible and like that they have the flexibility to adapt to different situations, from high end to commercial work. I also tell them to be patient, it takes time to grow and to evolve, you can’t push that. 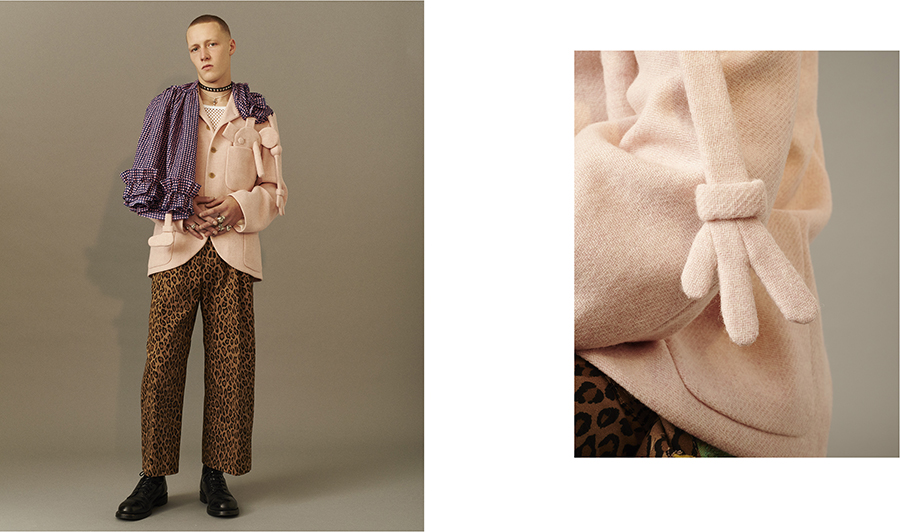 Do you feel that people ‘understand’ what you do now, more so than they might have in the past?

Yes, I  feel in general more respect in the last ten years. A lot of press people approached me in the past as the ‘crazy one’ – the loud statements, prints, colours and experiments were not really appreciated. Of course, there always were a lot of fans and loyal followers, but nowadays even the ‘traditional’ press and clients are more aware of what I’m doing and museums are really interested in my work that I did in the past thirty years. I think that they finally can see that my way of working, designing and not making compromises had an influence on the evolution of men’s fashion and younger generations of designers.

When you look around nowadays, where do you see the most dynamic examples of revolt and resistance?

There is not so much revolt and resistance going on these days. The general atmosphere from the world and the social and economic situation makes people afraid. I never would have believed, in the ’90s, that we would have twenty years later tolerance and freedom problems. The world is heading forward in a scary and uncontrollable way. Revolt and resistance are linked to surviving, not to creating the new or creating a better world.

So, what can creative individuals and communities do to try and change things for the better?

We all should be strong and brave. The young generations should believe in a better world. Artists should stand up and do the unexpected, fashion-designers should not copy, but search for thenew. Probably they will gain less money, but at least they can be proud to be original. We have to convince the world and world leaders about the power of creativity and imagination. There is no reason not to believe in the future!