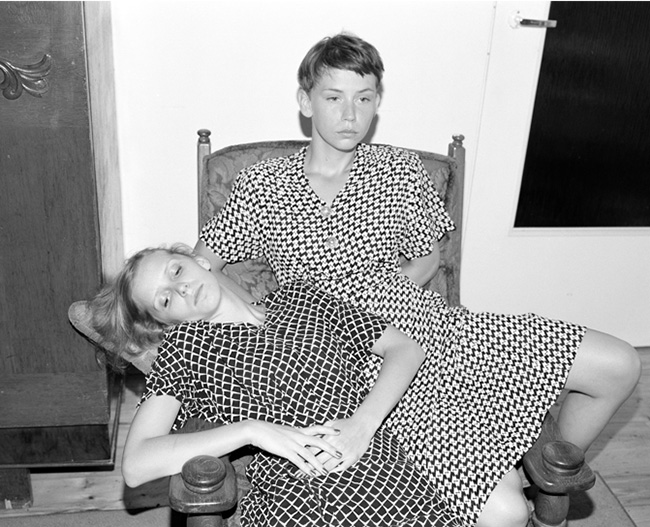 The ‘discovery’ of the self was both a consequence of the social landscape in the modern age and a driving force in the shape that it has since taken; the question of identity is a fundamental obsession of contemporary life, even if the complexities of how we become who we are and how we relate to those around us are too often reduced to simplistic formulas, most obviously as a means of reinforcing power structures that depend on defining identity in particular ways. At the same time, every attempt to fix identity according to certain categories – to tame its proliferation – has only shown the ever more fractured dimensions that make it up. Identity, then, is the shifting ground on which our social relationships are built. But those same relationships are also what form identities; we are constituted by proximity to other people, so that identity is not merely a state or a property, but a sort of ongoing negotiation, and what occurs at the interpersonal level is a microcosm of those possibilities that a given historical moment will allow.

In her series Frowst, Joanna Piotrowska describes the unstable formation of identity within the context of familial relationships, those primary interactions that continue to determine our behaviour long into adulthood. The family is, in many ways, the origin of a template so indelibly worn that even as we continually trace its pattern, the histories that lie behind it will remain all but invisible; identity appears as a given, when it is still the product of real and deep-seated tensions. Piotrowska offers a glimpse of this process, ostensibly showing those dynamic pressures within the family as they are played out daily in featureless rooms and around kitchen tables. It should be said, of course, that these are not necessarily pictures made to document anything and their psychologically charged rendering of domestic intimacy is rather too pointed to be just illustrating a social principle. Instead, these are characters acting within the family – or acting as family – and domesticity is the stage on which their identities comes into being, not in the form of a fixed and stable entity, but as one point in an uncertain constellation. Piotrowska goes beyond any familiar observation about our changeable natures, to describe the essentially reactive nature of identity.

These characters perform their roles so intensely, in so visceral a manner that the performance itself all but disappears and we are left with the impression that the individual simply becomes who they are. There are enough rough edges here, moments of fracture or discontinuity that this apparently effortless becoming is shown instead as a tenuous and fraught endeavour, one that we cannot entirely control. With their near forensic visual style, the pictures are a starkly elaborated window on events that are already ambiguous in nature. Piotrowska’s strategy seems, paradoxically, intended to obscure the nature of these scenes by presenting them in as forthright a manner as possible and indeed, the clarity of the photographs makes their strange atmosphere all the more threatening; their disorder does not so much lurk below the surface, but suggests itself as the only conceivable state of affairs. We cannot read these people in much the same way that we cannot completely read the photographs themselves. The apparentness of their presence, written in the crossing of gestures and gazes, is, finally, resolutely, illegible.

Piotrowka’s subjects have a strange sense of enclosure, hinted at by the title of the work, although ‘frowst’ is probably not a word in common usage. What it indicates, however, is precisely the febrile, airless atmosphere of these pictures, the confinements of familiarity and even of identity itself. The spatial tensions that are so striking in the pictures equate to their underlying psychological tensions, which is not rendered as an unconscious dimension of the photographs (or the situations they depict), but that are instead, a condition of all human relationships, the economy of desire that gives them form, a messy, often inscrutable, and sometimes tender complexity. We might not, at the same time, actually want to admit recognising ourselves in Piotrowska’s world. It has, after all, a certain edge that suggests dysfunction and even violence, real or implicit. But it is the readiness to conceal the role that these chaotic forces play in shaping our lives that finally demonstrates their significance. These are characters, then, that are not so much undoing repression as they are being undone by those irrational currents that are fundamental to the constitution of a social order. 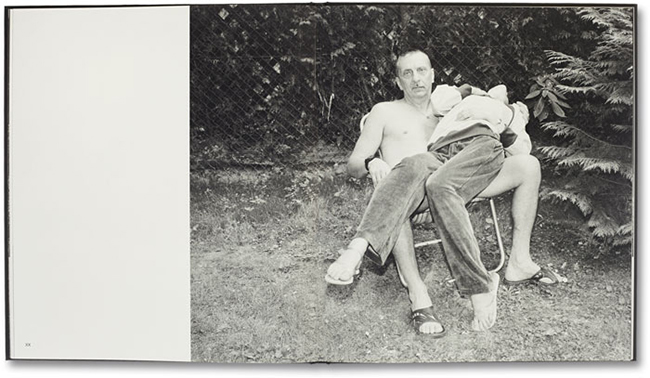 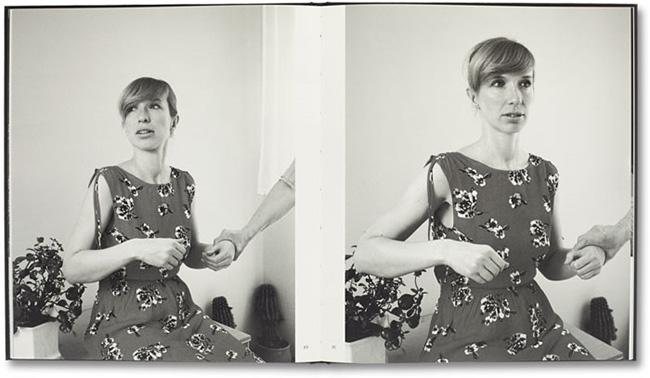 Spreads from Frowst courtesy of MACK (2014)

When it came to putting together the scenes that make up Frowst, did you begin with a specific idea in mind or is it more a case of seeing what happened in front of the camera at that particular moment?

It is a mixture of both. I was hoping that the images would evoke uncomfortable associations in the viewer and I was looking for gestures and poses with ambivalent meaning. I had some ideas I noted when researching family constellations therapies (both theoretically and practically), some of them came from my own experience and some of them from the others people’s family photographs. Before shootings I had ideas for the poses I would like to try, but I was also trying to be attentive to what is happening between my models and how they react to the situation. Some poses came out from their memories, their creativity as well as their rich or limited ability to be physically close with a parent or sibling.

Would it be true to say that you’re more interested in the psychological effect of these pictures, the sort of overall feeling that they have, rather than creating a narrative?

Yes, completely. There is no narrative as such. My aim was not to tell a story, but evoke scattered associations of inertia, violence or being mentally overwhelmed, but all of this accompanied by contradictory feelings: intimacy, closeness, joy, protection, and tenderness.

Can you say a bit about what motivated some of the choices you made in terms of style with this work? I’m thinking about your use of black & white in particular, as well as the direct flash.

My motivation was to find an aesthetic that would indicate the importance of the content of the work. Flash flattens the image, merges bodies with domestic interiors, objectifying them. Physical bodies become heavier and exposed because there are only forms without the distraction of colour. What matters is a gesture, a pose and solid formed by two people which becomes the visible of the relationship. Another important thing to me was that black & white is related to the act of documentation. This is how photography started its functioning in the arts – it was a tool for documenting performances and actions. I see my work also as a documentation of several domestic performances. Of course ‘staging for the camera’ and aiming for the effect (an image) definitely took place but still, the way I was working is a conglomerate of preconceived ideas for the images and the additional element which comes from working with real families, their real attitudes and relationships. 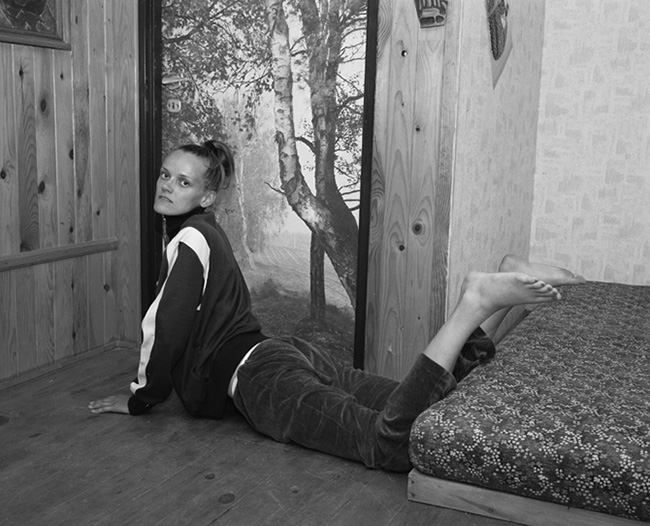 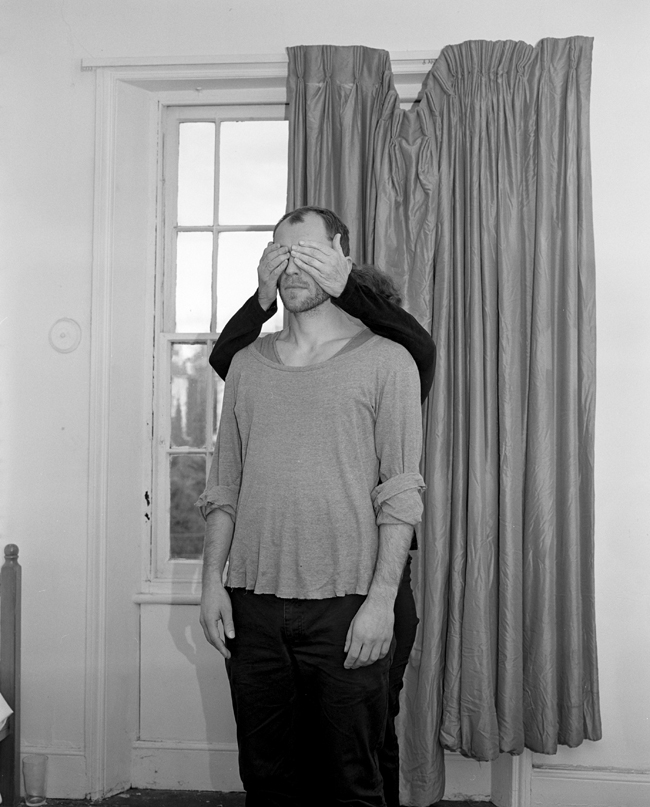 How did your subjects react to the project when they saw it? Did they recognise their own personalities in the pictures or were they more like actors playing a role?

Reactions were different, but I think most people do not identify themselves with characters from the images. It is very difficult to say how much in the images comes from my models’ personal experiences. We can see several people in thirty images and although characters change there is still the same, uncomfortable vibe, which I think is constructed mainly by myself and by how I see family. However, I have never worked with actors in this project and maybe, if I could try, it would turn out that there is something missing, because the people being photographed are not related to each other. I decided to work with real families because I found it more interesting – it was me and my ideas plus them and their photographs from the past, their history and their present relationships. Even though I don’t know how much it influenced the work I think it was a huge additional value to this project. It makes unclear the border between truth and fiction, between what is real and what is projected and finally between the genres – social, documentary photography, and art. In Urlich Seidl’s films there are professional actors and amateurs and we never know who is who. I really like this idea. At the end of the day, everything is the mixture of both – playing a role or being truthful, no matter if it’s a film or life.

Could it be that the book functions as a sort of alternative family album by actually including the strange or awkward moments that usually get left out of those narratives?

The poses themselves are not that awkward: there is a kiss, a hug, sitting on knees and most of them I took from other people’s family albums so they are not left out. What makes them awkward is that the pictures are staged by adult children so we see independent individuals in vulnerable and powerless positions.

The title of the work, Frowst, is probably not a word that most people would be familiar with – myself included. What do you think it says about the pictures?

I hope it stimulates curiosity in the first place and then points on the duality of being a part of the family. 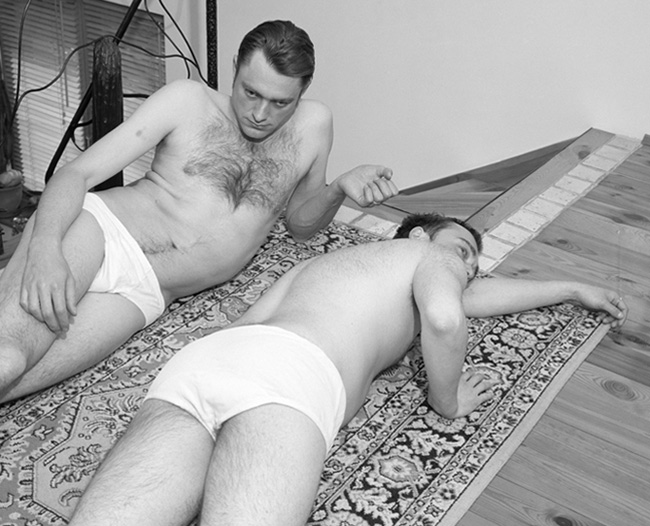 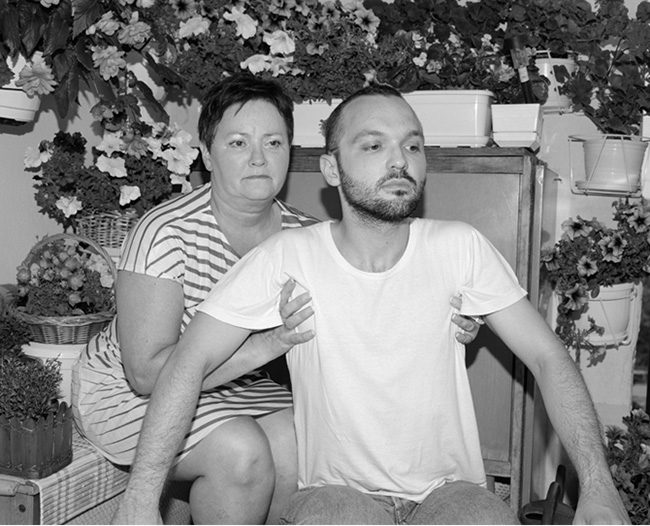 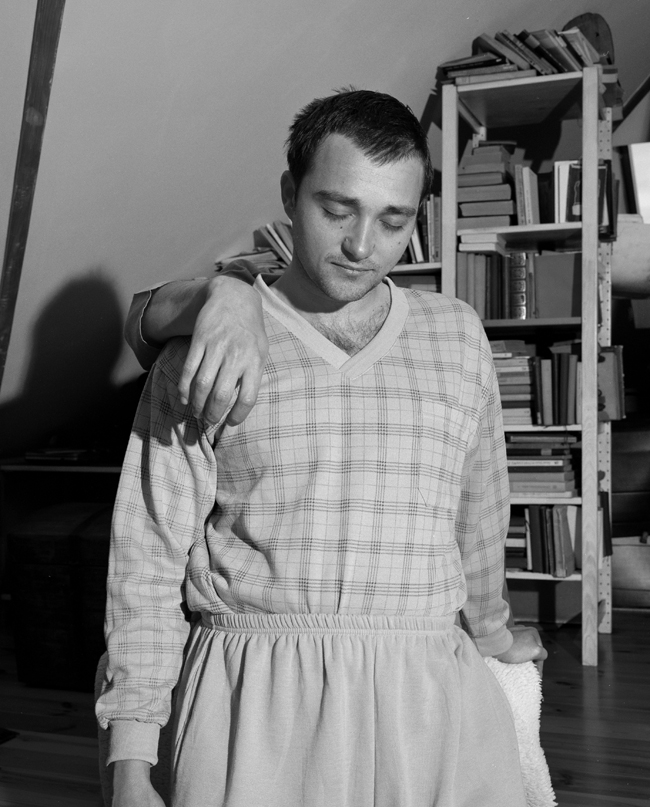 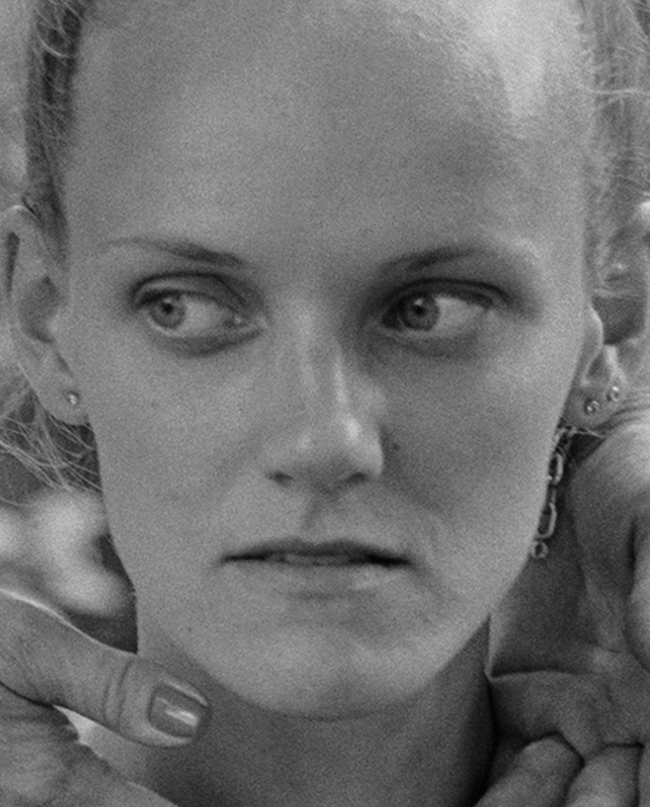 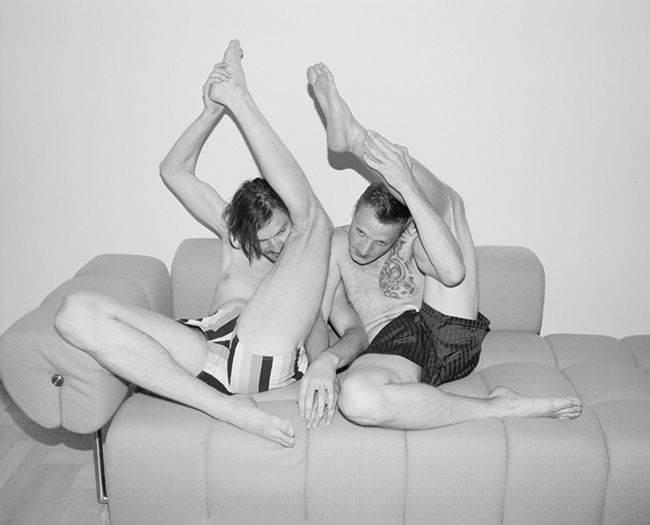 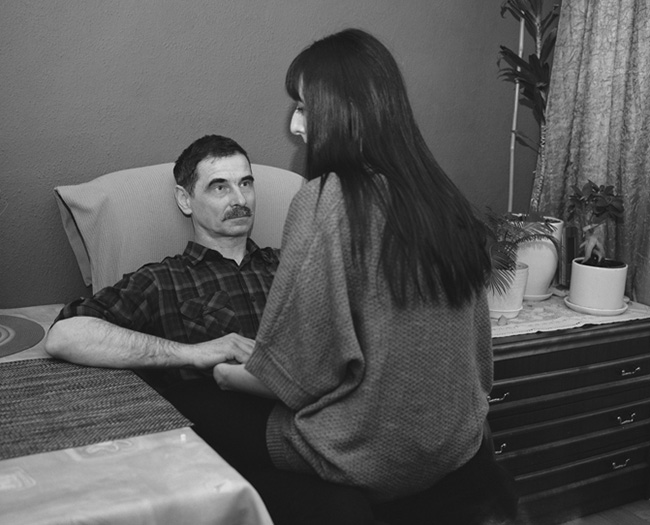 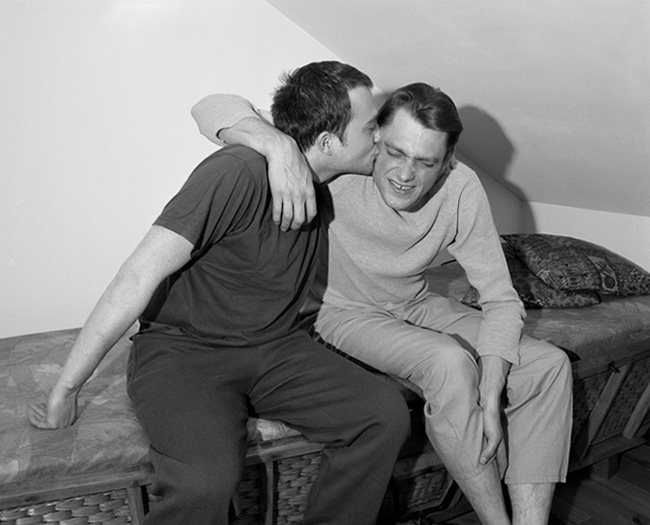