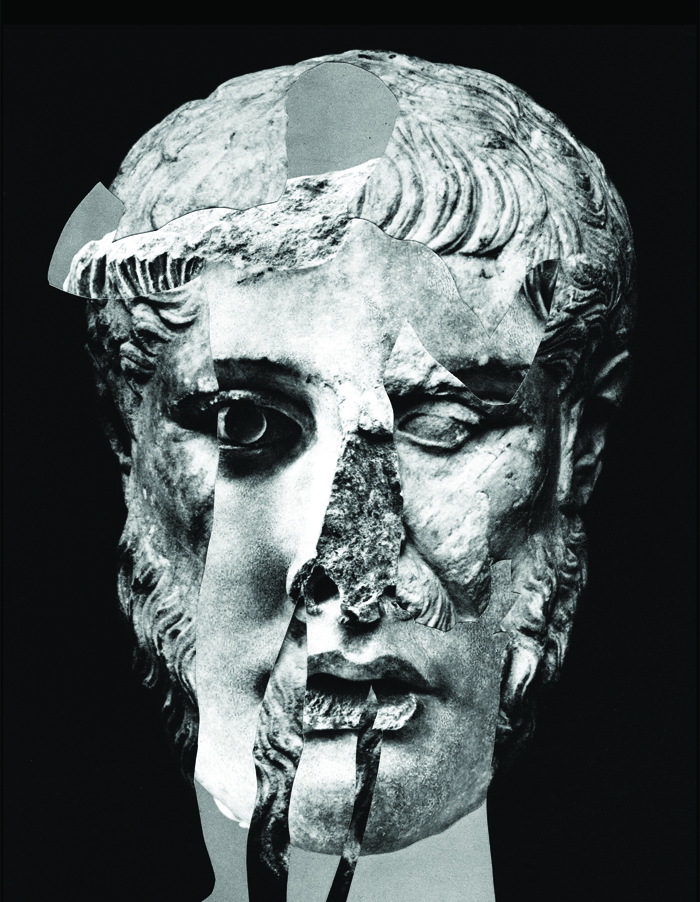 An overriding sense of positivity and audacity exude from the work of San Francisco based artist Ryan De La Hoz who engages in heavy topics in a playful and adroit manner. Growing up on a healthy intake of cartoons, comics and skateboarding as a child of the 80s, popular culture and urban aesthetics were an inescapable inclusion for any creative work the Bay Area stalwart would turn his hand to. Indeed, working with his hands is exactly what he does best. Small spontaneous doodles on scrap paper are effortlessly brought to life. Inspired by the paper cut-outs of Henri Matisse, paintings by Margaret Kilgallen and the graphic illustration of Frank Miller, De La Hoz is a sucker for punishment. In hand generating the majority of his pieces – despite their deceptive digital aesthetic – hours of painstaking work with ink and ruler are often behind his slick creations. Regularly deploying repetitive pattern making in the composition of his imagery, De La Hoz utilises techniques and approaches derived from design and advertising, informed by his background in publishing and production for his online store Cool Try that extends to sweatshirts, stickers, caps and tote bags.

Attributing his diverse forays to an ever increasing DIY culture, this self-taught multi-talented artist continues to experiment and expand on his way of working. From Greek statues spliced with psychedelic Tie-dye patterns, to faux marble, white noise collages and Biblical references, the essence and modus operandi of De La Hoz’s work is centred around the examination of the current moment and human existence through a lens that detaches time and context. This new age antiquarian takes his viewers on a journey from the Middle Ages to an overstimulated current day cut-and-paste society and back again. However, this perspective is not without emotion, quite the contrary, as feelings of nostalgia and empathy are conjured via poignant musings signified through visual cues concerning death, fragility, isolation, freedom, oppression, power, joy, misery, creation and destruction. Visual tensions convene in bursts of colour that result in double entendres. The effect: a formulated moody chaos and transmission of discord in the form of works on paper and canvas, collages, sculptures and installations. 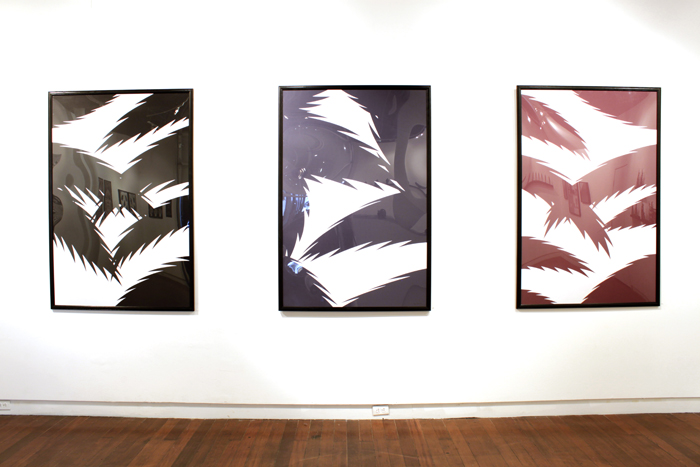 Popular culture, history and technological advances appear to be a consistent thread throughout your organically created work, with nostalgic references to Tie-dye imagery from the 60s spliced with archeological artifacts and digital aesthetics. What connections are you hoping to create for the viewer?

In my work I try to examine the past and present at the same time. These days I have been focusing heavily on periods such as Late Antiquity through the Middle Ages, and the counter-cultural Hippie movement. I use periods in history to excavate emotions because I think one thing that ties all of history together is the feelings of a society at any given time, such as: Apathy, fear, hope, joy, misery, etc.

Can you tell me about your interest in presenting dualities within your work, like notions of life and death, joy and misery, creation and destruction? How difficult is it to distill complex ideas down into a clear image in order to communicate with your audience?

I like the push and pull of objects or themes that represent opposite ends of an emotional or philosophical spectrum because I am interested in examining where we are now because of what we have been through. I don’t always wish for my image to be crystal clear in its statement, but I do want to spark some form of conjecture. My process is that of distilling complex ideas into simple objects like patches and puzzles to convey broader ideas. I’m not sure if I consider that to be difficult. I try and let all ideas come simply and naturally.

Where does your interest in repetition and pattern come from?

It comes from an aesthetic desire as well as an interest in Repetition Principle which is utilised in advertising and propaganda campaigns. That which is repeated builds power through perceived power.

What impact has technology had on and the way you work? Do you spend a lot of time behind the computer?

Technology has informed my current work as far as producing laser cut sculptures and digital prints but other than that I cut, paste and manipulate by hand. I spend very little time behind a computer. When I design something I do so the pre-Photoshop way. Certain technological aesthetics inform my work very much but it is important to me that I am making and manipulating with my hands. 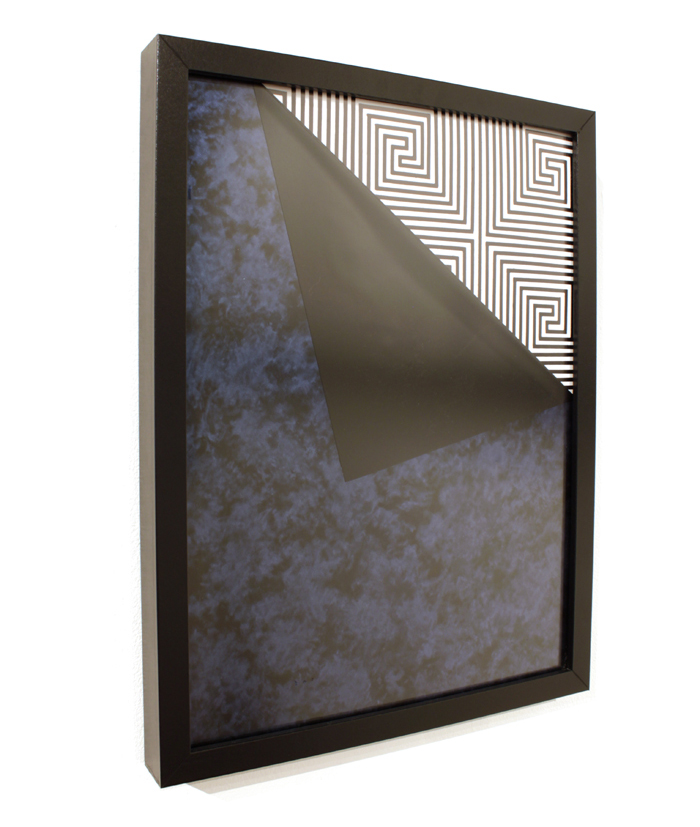 Predominantly you are known for your free hand drawings and paper cut-outs, however recently you have been experimenting with different materials and techniques such as fabrics, rubber and, as you mentioned, laser cutting. Are you enjoying exploring new options to expand upon your visual vocabulary?

Expanding my way of working has been very liberating and I want to continue to push the doors open. It keeps me from getting bored.

Are the titles of your works important in helping to illuminate your stories?

I think my titles are usually vague. If they are not ‘Untitled’ they are usually one or two words long. When it comes to naming the work I like to keep it brisk.

You are of Yaqui Indian heritage, has this informed your work at all?

I found out I was a part of this lineage when I was 24 years old and it affected me deeply. It influenced the work I was making at the time in that I started analyzing the stories of the ‘Snake People’ that are a part of Yaqui folklore. These days my work deals with broader subjects though.

Are you inspired by literature? Do you read much?

Yes, I am inspired by poetry, short stories and graphic novels. My influences range from Meditations in an Emergency by Frank O’Hara, Watchmen by Alan Moore, to Death of an Old Old Man by Roald Dahl. 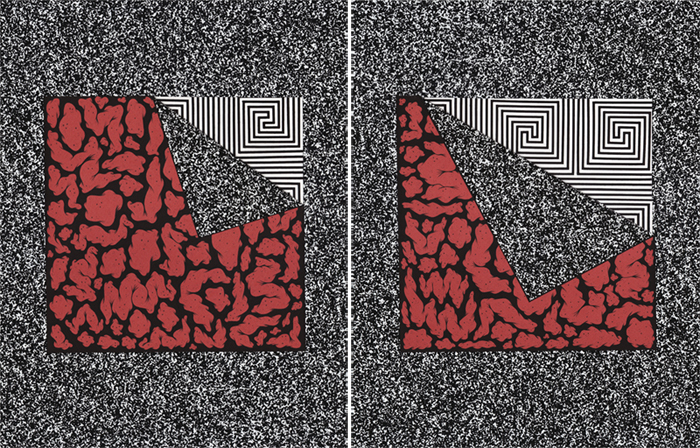 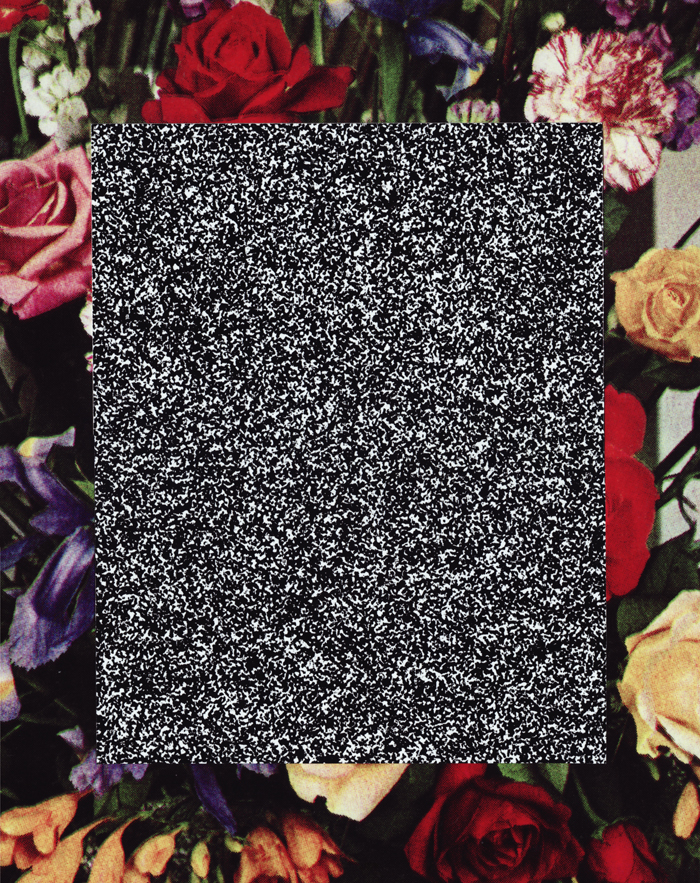 What are some of your latest spontaneous doodles that have turned into great works?

For a solo show at Flatcolor Gallery in Seattle that opened in May (2014) I drew a very simple drawing of a white Roman column being lifted by balloons that sat in the center of a room. I knew I had to make this a reality and the result can be seen here.

How do you view your T-shirt company Cool Try against your practice? Do you separate the two mentally or is there some cross over?

I do mentally separate my ‘goods’ from my fine art but occasionally there are inevitable stylistic cross-overs. I view Cool Try as a fun way to experiment with designing objects. The ethos of the brand is that of utmost positivity.

You once described your work as ‘superflat’, do you take inspiration from artists such as Takashi Murakami and Japanese graphic art?

I personally took my inspiration of a hyper flat look from that of Bay Area artist Margaret Kilgallen’s paintings and Henri Matisse’s paper cuts.

Have you ever considered creating an animation?

It has occurred to me and perhaps one day I will get into the realm of the moving image. As it stands I have only made one thing that comes close.

You have also made zines in the past. How did you get into publishing?

Punk rock? The DIY culture means that anyone can get into publishing by making their own zines! What a great thing.

Do you have some all time favorite comics or cartoon characters from childhood?

Batman: Year One by Frank Miller is one of my favourite graphic novels of all time. I soaked up plenty of Saturday morning X-Men and Teenage Mutant Ninja Turtles cartoons as well.

What are your favorite collaborations to date?

I made a series of paintings/drawings with artist Mia Christopher a couple of years ago that I quite liked. Jeff the founder of Booooooom owns one of them and it can be seen here.

I am working on a capsule collection with a clothing company as well as a print release but I cannot say with whom just yet! I also have a solo show opening in October at a new gallery space. 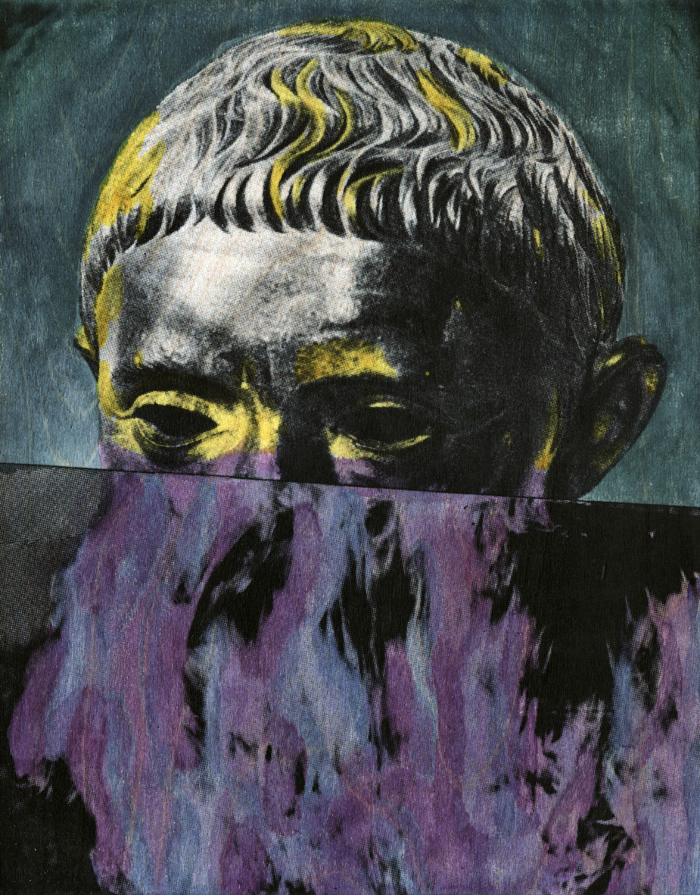 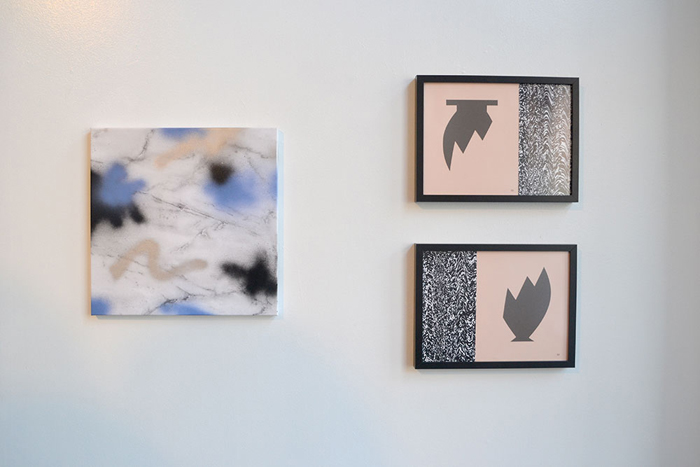 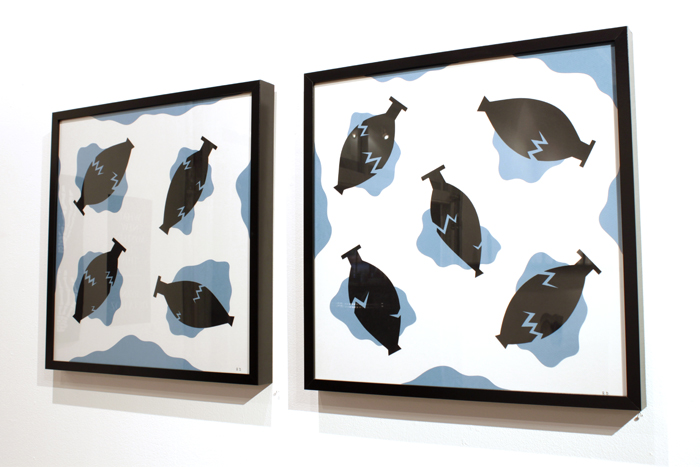 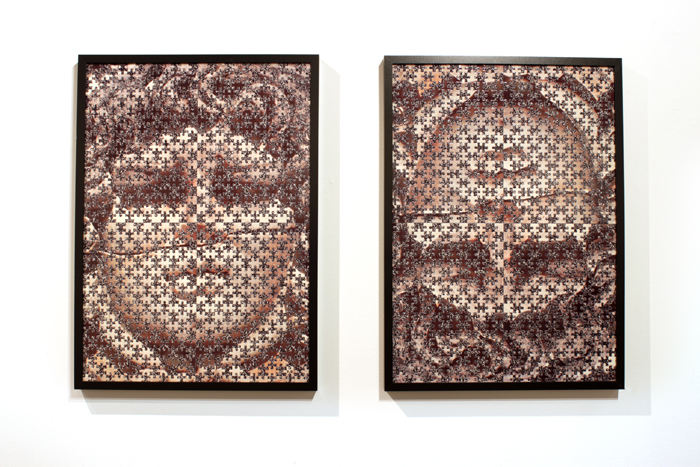 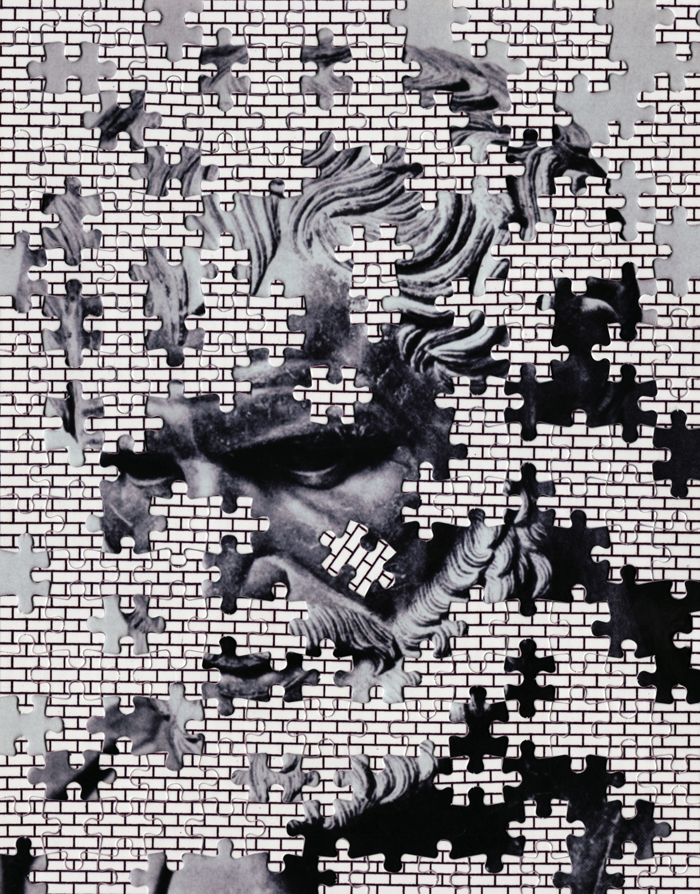 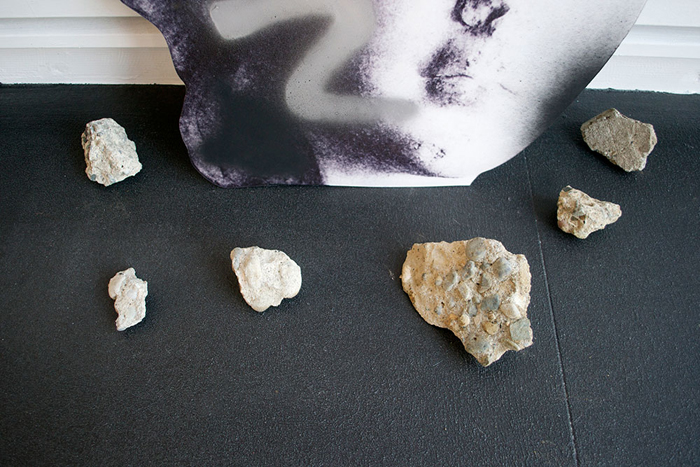 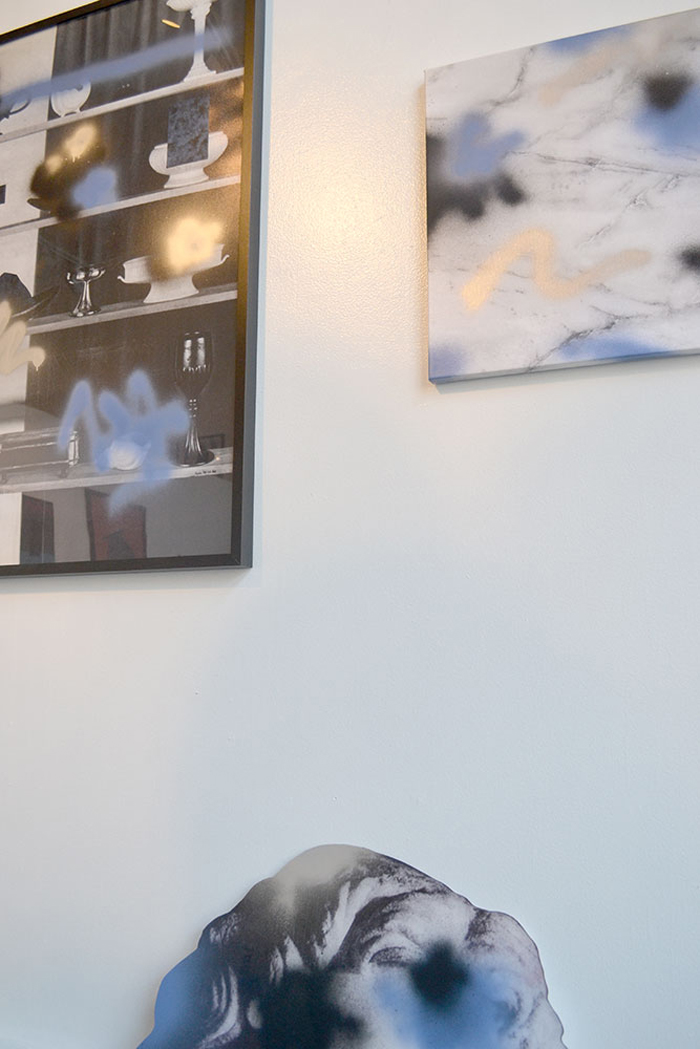