Beginning his career as a cinema set painter and after a 2 year residency at Fabrica (the Benetton centre for research in communication) Italian born, London based photographer Lorenzo Vitturi began to focus on photography, a medium which allowed him to fully realise his creative ideas. Fresh off the success of his acclaimed project Dalston Anatomy and having just won this years Grand Prix du Jury Photography Prize at Hyeres Festival, Vitturi invited us into his studio space for an afternoon, where we talked about the rapid gentrification of inner city London, the release of the 2nd edition of Dalston Anatomy (released 28 May) and his many number of exciting, upcoming projects this year. 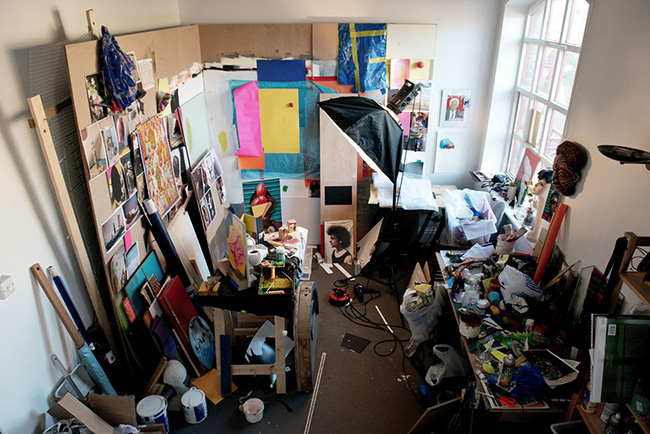 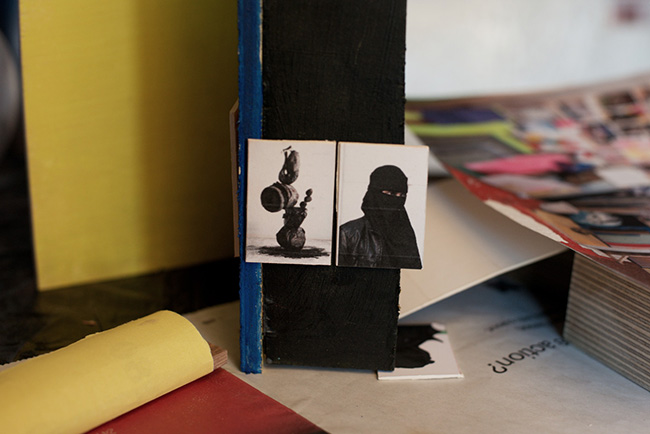 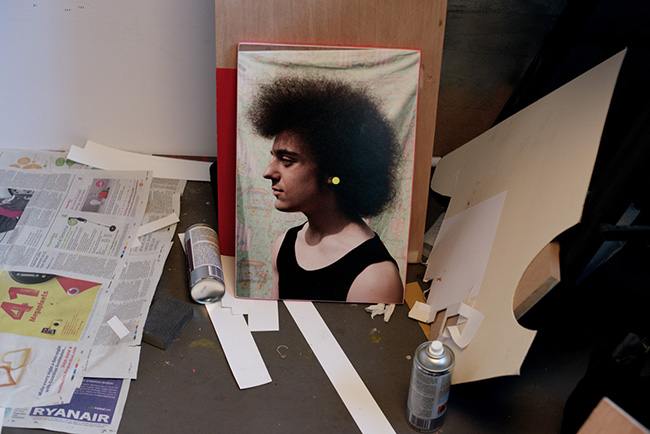 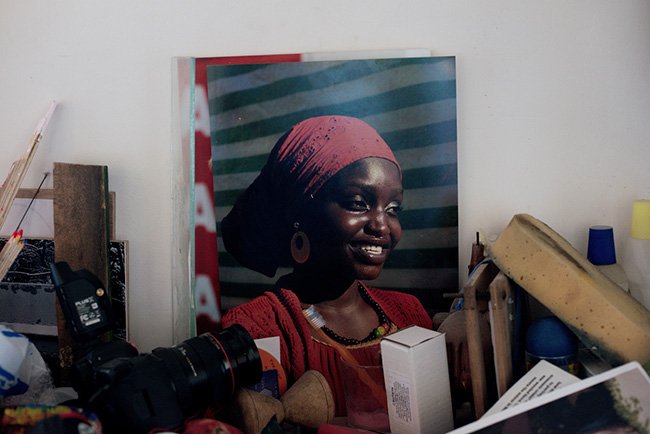 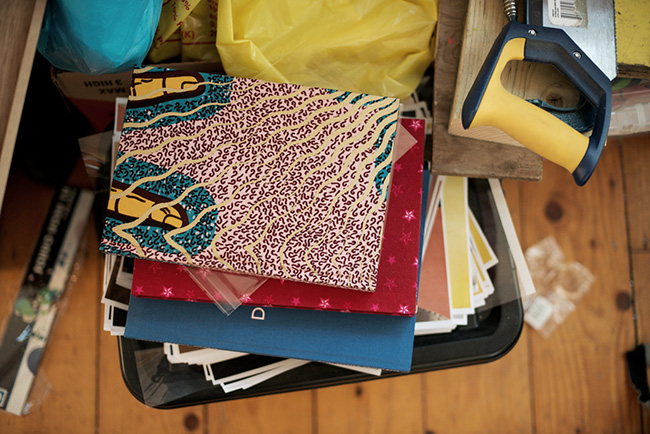 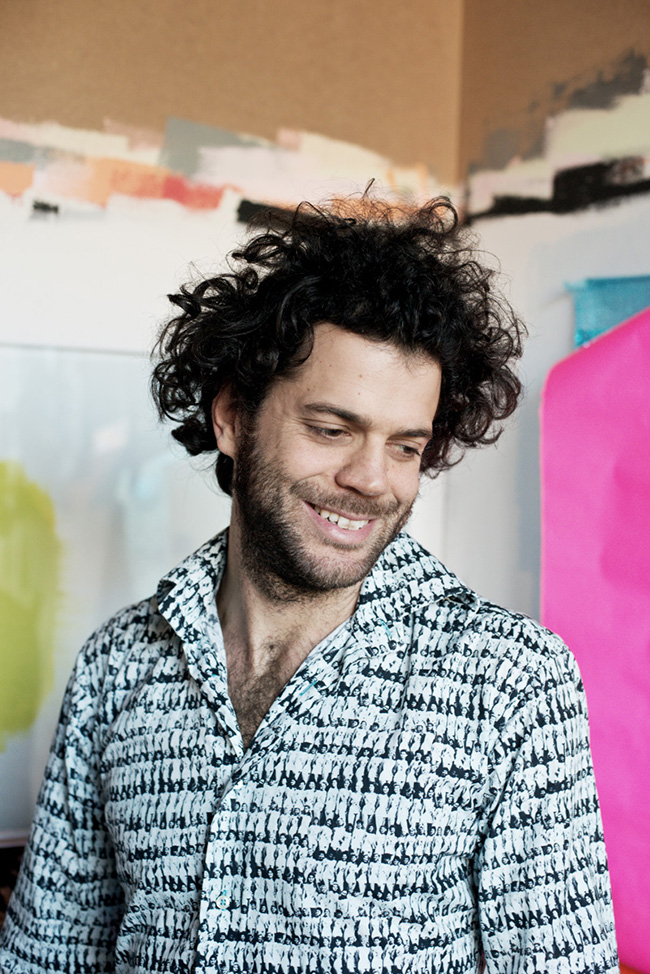 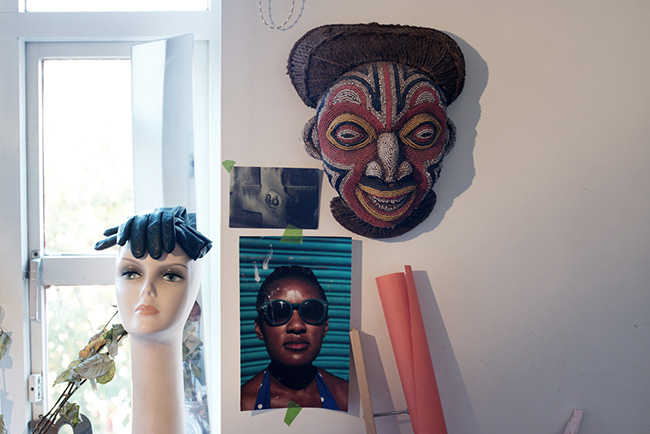 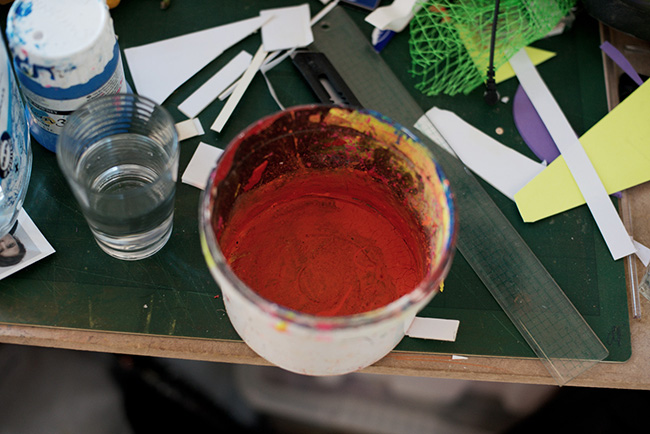 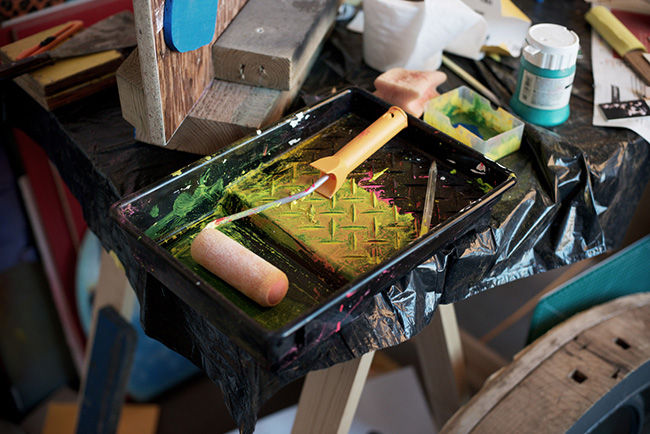 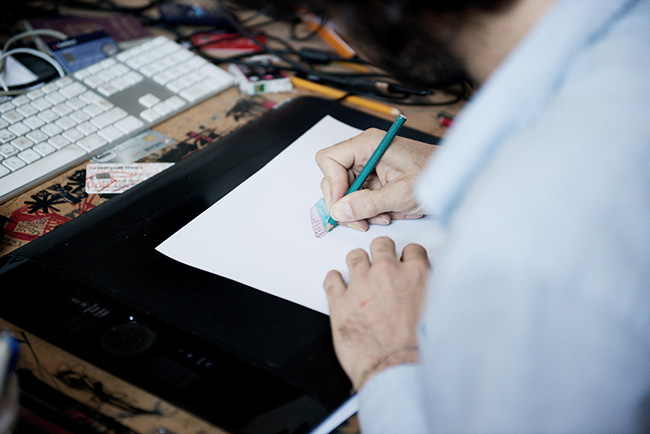 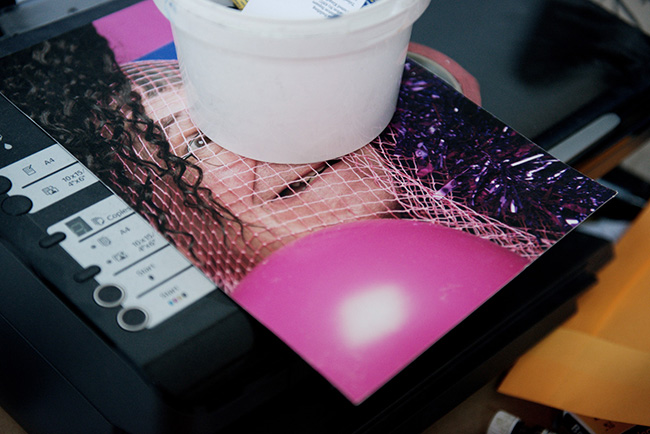 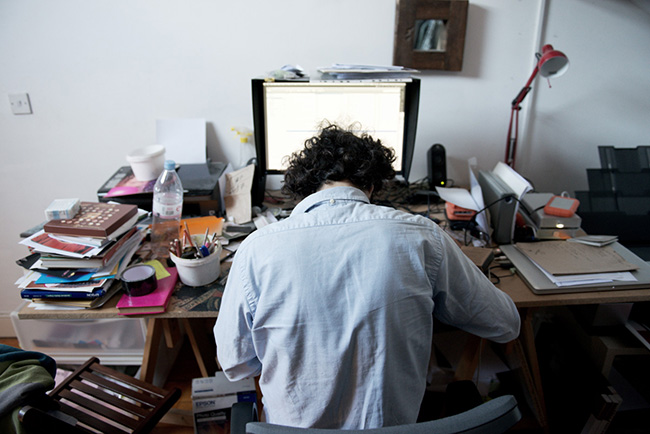 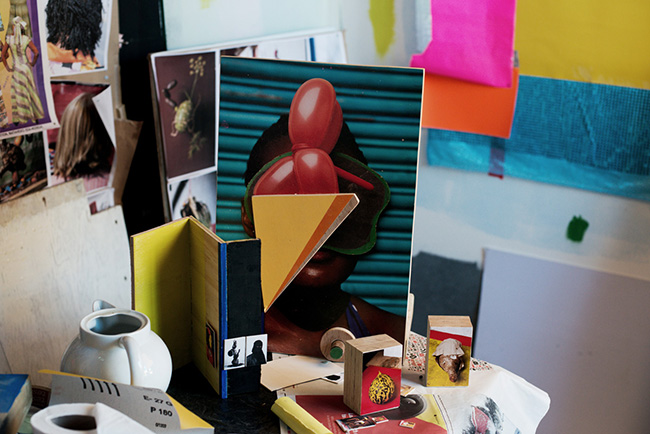 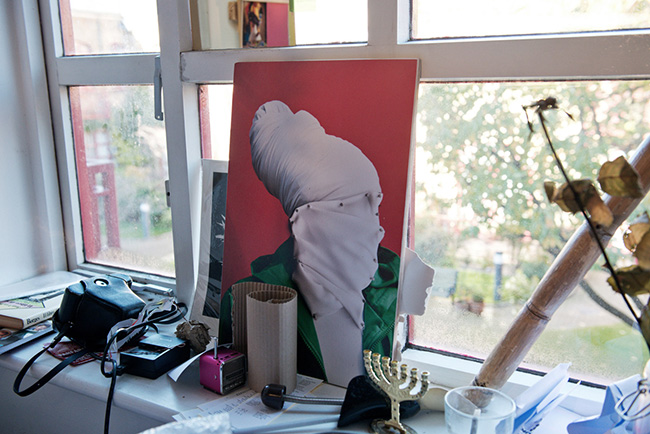 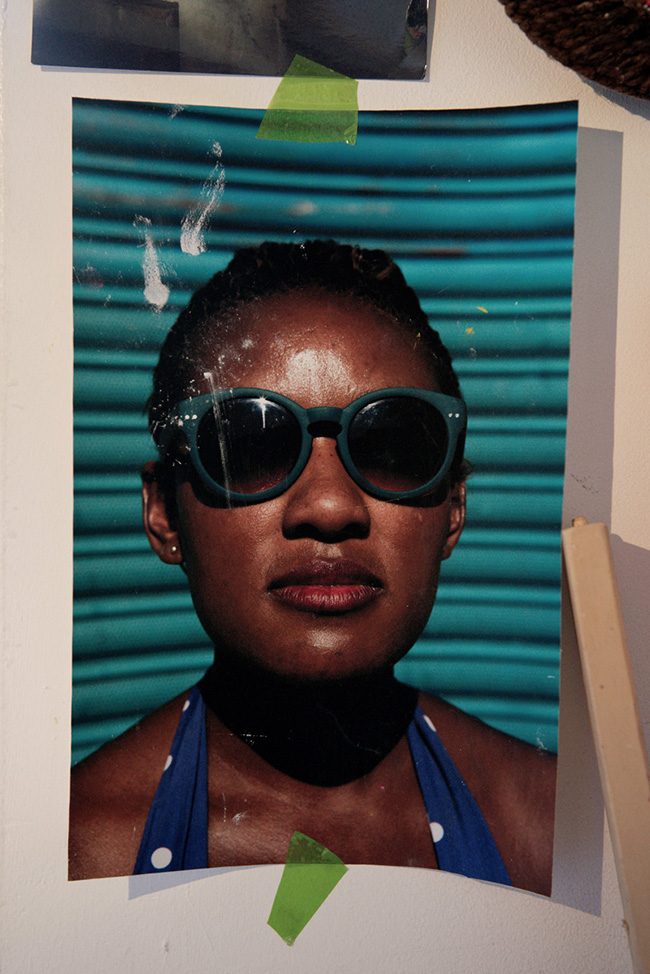 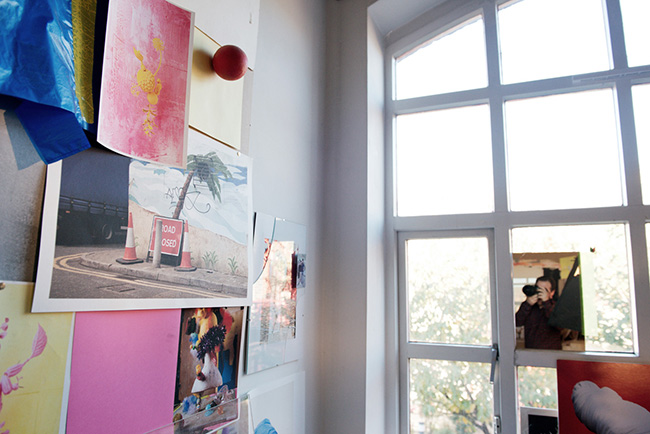 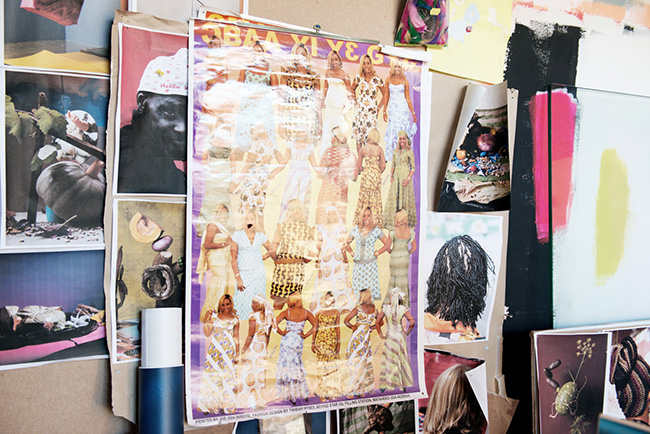 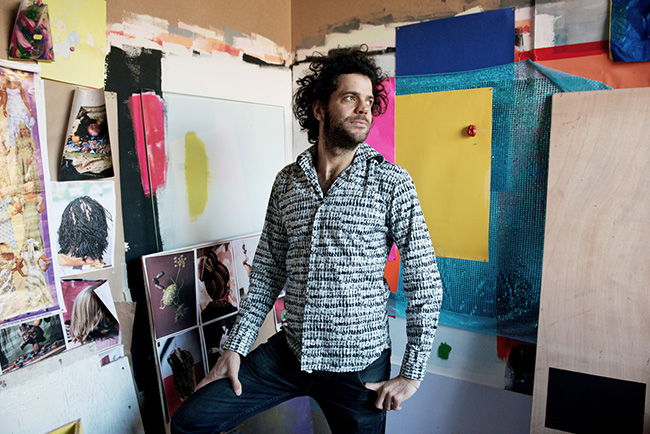 Where is your studio and how long have you been there?

My studio is in Dalston, on Shaklewell Lane, in a warehouse conversion which used to be a bible factory. I also live here, so it’s my studio but also my home. I’ve been living here for 6 years, but the studio came about when I started to create this project about Dalston, so I really wanted to have a studio close to the market so I wouldn’t have to spend any energy on travelling and instead have everything that I need right on my doorstep. It’s a small studio but I have everything there and I really love it.

Have you heard of the council’s plans to change Dalston Shopping Centre into a high street mall?

All of my work is about this because as soon as I started to see these changes – that gentrification was happening so fast – I just wanted to capture it. I saw yesterday that all of the pound shops on the high street are closing down and these are the places that I used to buy all my stuff and it’s incredible how fast it’s changing. It’s a clear sign, when the pound shops are closing, that the area is changing a lot.

How would you describe your work space?

It’s an intimate creative cell. I’ve got all my materials divided into areas, I have a lot of organic items and things I find on the street in one area, I’ve got a digital section, so everything that I need to create my ideas.

There’s not really one specific time of day, sometimes it’s the morning, other times it’s the afternoon. Especially with Dalston Anatomy, I’d think a lot about the execution of the project but when I’d sit down to work on the sculptures or the photos, the ideas would develop quickly. That’s why having the studio in my place is important because when I’d have an idea I could work on it straight away. But I rarely work at night, let’s say my day starts at 8.30am and I finish at 7.30pm. Also, 30% of my time is travelling, I work in Milan quite a bit and also on commissions, so I have a double life.

How much of your time is spent working on commissions?

Have the types of commissions you’re now getting changed since you published Dalston Anatomy?

They’ve changed a lot, I get calls for commissions off the back of the book and there’s a lot more creative freedom.

Where did the idea for Dalston Anatomy come from and how long were you working on the project?

I worked on it for 2 years, nearly full time, so I stopped all my commission work and worked nearly everyday on it. The idea came when I wanted to focus more on my personal projects, so I pulled all the ideas I’d been collecting over the past few years and I started to experiment with still life and tried to mix all these materials to create temporary sculptures. Then I stepped out from the studio and saw that Dalston was changing, the market was changing, so that was a really important moment for me. I started to mix these 2 together, my studio still life work and the outside world, which to me, was the gentrification of Dalston.

What was it about Ridley Road Market in particular that drew you to it?

Ridley Road was my props house; I’ve always worked with really poor or found materials so it became the first place I would go to, to find props for my still lifes. Then I discovered this incredible world of African fabric, things I’d never seen in all my life. So I also selected all the different fabric to be used for the cover of each copy of Dalston Anatomy. I asked the shopkeeper about the different patterns and the story she told me linked in so well with the project. The fabric looks African, but is produced in Amsterdam, so when you look through the book, it looks like Africa but actually, it was made 1 mile from the City of London.

How was your experience working with food to create the sculptures? Did you have an idea as to how you wanted them to look?

One of the main ideas behind Dalston Anatomy and my work, is this natural process, almost like birth and death; I tried to recreate this with my still lifes so using organic matter was perfect. Sometimes I’d start to build a sculpture and I’d leave it there for a couple of days, so photography is the only way to document its decay and this is what I wanted to put in the book. The market follows the same idea, so using organic matter was the perfect subject to show this natural process. I used it also to create shapes; fruits and vegetables have really interesting textures and colour.

What are you working on right now?

I just finished the 2nd edition, so following what I just said, the 2nd edition will have the same sculptures, but in a different position, to explain a little bit further this process of birth and death, so you’ll be able to see all the little, different changes. The single picture isn’t really important, but what is, is the process behind the sculpture. We (Lorenzo and Bruno Ceschel, SPBH editor) decided to change, not to have different pictures but to have the same still life in a different stage of decay. I’m also working on a project for Unseen Festival in Amsterdam, they asked me to work on a project that’s also becoming the campaign for the event, so for the first time I’ll be creating a big scale sculpture which will be about 10 meters high, taking the same approach as Dalston Anatomy so using really poor materials found around the city while I’m there, so that’s an installation that will be up for 4 days. I’m used to working on a small scale so this will be a challenge.

I also have another 2 books I’ve been working on around the same time as Dalston Anatomy, they’re more sculptural, so I’m trying to finish these as soon as possible. Aside from the project for Unseen, I’m also preparing for a show at The Photographer’s Gallery in July. For the first time, I’m going to present Dalston Anatomy in London.

That’s great, congratulations! So are you also planning to show sculptures during the show and if so, how will they be presented, considering you use matter that easily decomposes?

I’m trying to find a solution for this; there’s some stuff that lasts for a couple of months. I already presented it once before in Amsterdam at Foam, where I tried to translate the sculptural side of the book in a bigger space. At TPG, it will be a wider and deeper approach and the space is also bigger.

Purchase Dalston Anatomy 2nd edition from Self Publish Be Happy

Photographs by Owen Richards, Interview by Patricia Karallis / Published 26 May 2014