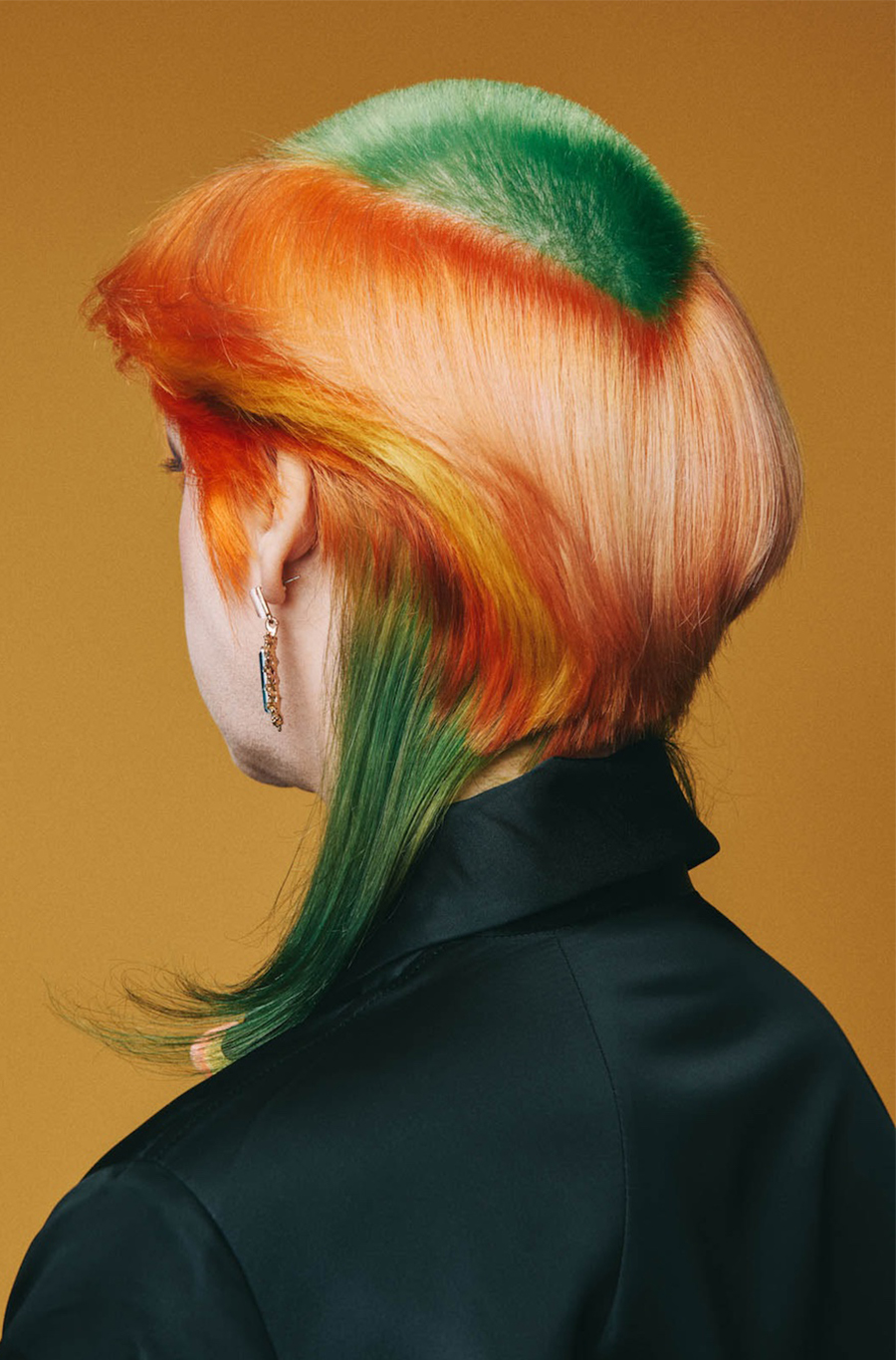 From Andy Warhol’s familiar flaxen wig to Karl Lagerfeld’s petite ponytail, or Mary Quant’s quirky bob, artists and fashion designers have across the years notably honed their hair to form an essential part of their public image.

For Julie Verhoeven, however, a distinctive hairdo is less of an established trademark or branding exercise and more of an ongoing process of experimentation and joy. Since her formative years, the multi-talented maverick has cut, dyed, shaved, crimped, curled, teased and tweaked her crowning glory with the same explorative zeal, research and energy that she brings to her work. Her impressive CV encompasses illustration, fine art, fashion design, film and performance, resulting in a variety of high profile events, installations and collaborations, not least the most talked-about exhibit at Frieze London in 2016, The Toilet Attendant… Now Wash Your Hands, or the various genre-clashing projects she has undertaken with designers and brands including Marc Jacobs, Versace, Louis Vuitton, Mulberry, H&M, Hogan, and Peter Jensen, to name a few.

In more recent years, Verhoeven has enlisted the services of hairstylist John Vial – who has transformed models’ tresses for the runway shows of designers including Gareth Pugh and Charles Jeffrey – and the revered colourist, Tracy Hayes, formerly the UK Creative Colour Director at Vidal Sassoon. Their tonsorial expertise, combined with Verhoeven’s fun and fearless approach, continually results in a collision of attention-grabbing shapes and retina-popping hues, simultaneously confrontational yet captivating. A special kind of Hairdo Heaven.

What was your hair like when you were a child, Julie?

Sadly, my mum was very keen on the low cost, easy maintenance, DIY ‘bowl cut’. I had dull brown hair like this for my first decade, more or less, resembling a rather unattractive boy. As a result, I distinctly remember posing in the front garden with a crocheted poncho pulled back over my head, to create a full head of swinging hair, and being quite brazen about it. In hindsight, I was obviously feeling the effect of peer pressure to have long hair. It was the 1970s, after all.

As you moved towards your teenage years, who were your major hair heroines and heroes?

Pre-teens, it was Crissy Doll – with the magic growing hair. I didn’t have one at the time, but would still like one now. Phil Oakey of The Human League was a major inspiration, plus Susan Sulley’s wedge. I couldn’t believe how beautiful Phil’s lush hair was and couldn’t quite fathom how he had even conceived to arrive at this ‘do. I also had a soft spot for Bo Derek and her white girl braids in the film, 10. Bette Bright’s demi-crimped mushroom shaped hair, on the cover of Deaf School’s English Boys/Working Girls album, was enviable. The model and actress Peggy Moffitt – and her amazing sculptural ‘do – had a huge impact on me. Angela Davis had the ultimate beautiful afro.  Plus, I was impressed in my early years with my mum’s hair, which was an uber short flat crop. I remember thinking that it took some courage if you don’t look dinky like Mia Farrow.

At what age did you begin to experiment with your own hair?

I began gently, as soon as I was allowed, with auburn and chestnut tint sachets in my earlier teens. After that, I moved onto the sunny side, with Sun-In hair lightener, and started to lose the brown. It then all kicked off with gay abandon at the age of 15, when I saw a rather particular hairdo in print in i-D magazine, by a stylist at Antenna, off Kensington Church Street; I got myself up there. It was a great ‘do – the back of the head was shaved and looked like a plucked turkey’s bum, and the front was a mass of short, assorted coloured corkscrew extensions. I loved it, but my school did not. I had to sit one of my O Level exams in the head teacher’s office, out of sight of others, and another at the back of the class, so as not to distract or offend fellow pupils. My mum was called into school to discuss it. She ardently defended me.

Can you describe some of your other memorable hair ‘looks’ from throughout the years?

Prior to meeting John Vial, the most memorable was the Antenna look, of course. There was little of note during my twenties that I can remember. I was conscious at that time of having to make some sort of concession if I was ever to pull a man, and that my hair needed length to prove to be somewhat more desirable and digestible. So, long blonde hair, sort of hippy-goth, was the compromise during these seeking-a-mate years. Once I got more comfortable in this department, it started to get shorter with a many-a-mullet moment. The mullet remains my default choice of hairdos. I’m never really sure why, because it really is a terrible proportion for my face, but I like the horror and humour of a mullet. Half long and half short is the appeal, I suppose. Plus, I love Rod Stewart…

Which of these, with the benefit of hindsight, would you now choose as your favourites?

It’s unkind to choose a favourite. I hope to have not, as yet, reached that moment. I keep searching.

Do you think any of your past hairstyles were a mistake or a disaster?

Many, including the full cropped buzz cut look which scared me. And the subsequent growing-out of a crop is very unforgiving. There was also a load of black corkscrew hair extensions-meets-Lene Lovich-meets-Cher moment, which was cruel on my complexion. Plus, another micro-cropped, high forehead, Queen Elizabeth 1st-meets-Orlan style, which was tricky. My Rabbi’s wife shiny wig was a moment of weakness too…

What defines a good or a bad hair style?

I’m a big fan of ‘commitment hair’, a commitment to a shape, the need to take a decision. I’m not keen on non-committal hairdo’s when it’s just a load of hanging stuff that says nothing and is annoyingly timeless and passive, or then manipulated into loose, lady-tonged curls which often then transforms into an inoffensive, generic low slung ponytail. Unless, of course, the hair is an exceptional colour or exceptionally succulent or exceptionally ravaged.

When did you last have a so-called ‘bad hair day’?

I refuse to admit they exist, not because I think I look good, but because hair always holds promise and its very presence alone is deeply satisfying. 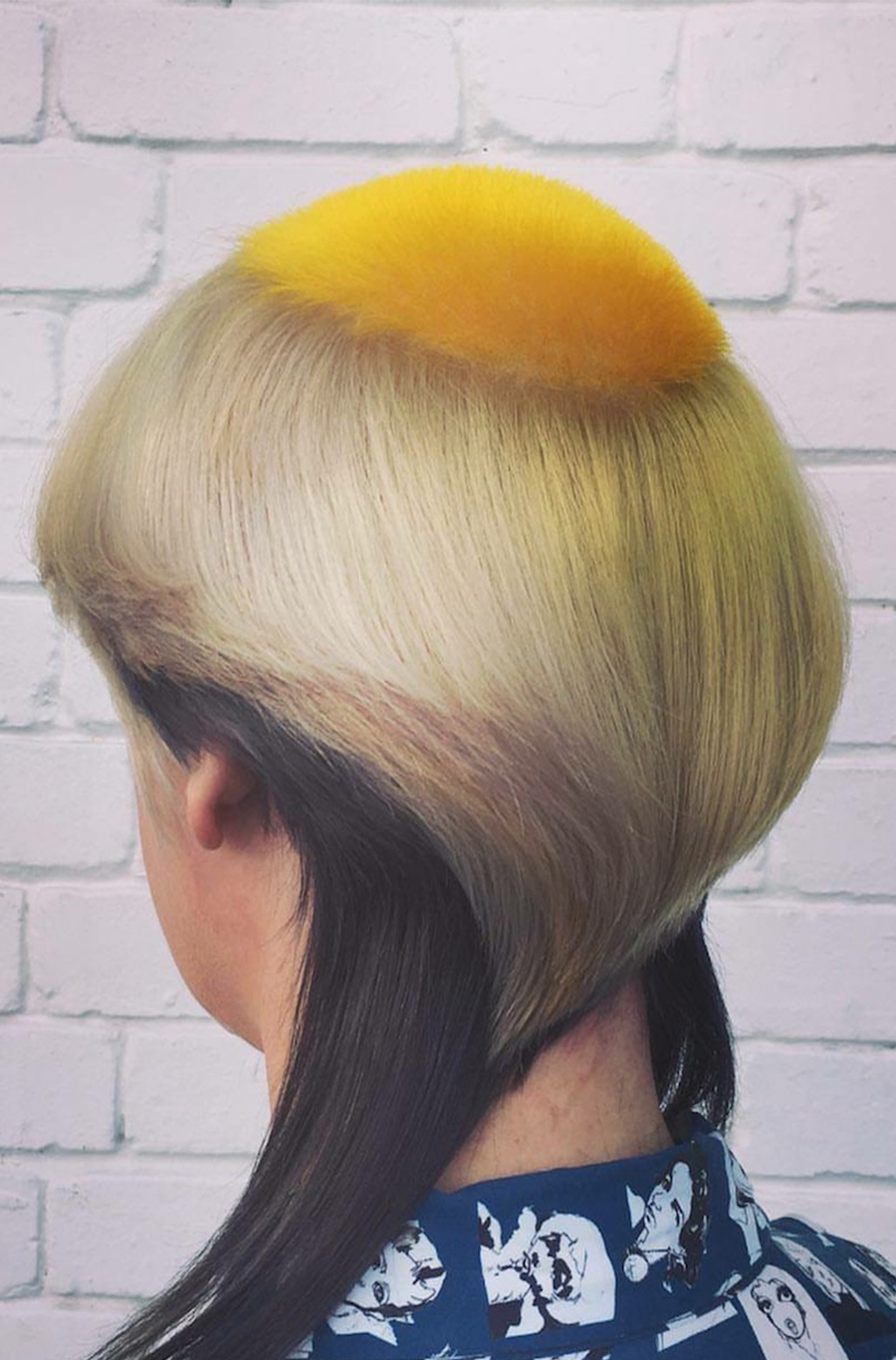 When did you first begin to involve John Vidal with your hair?

I have Richard Mortimer [magazine editor and DJ] to extend eternal gratitude to. I had reached a point where my hair was saying little, it had got long and was a compromise – I was back on the boyfriend hunt at the time. I needed to take action. I cant remember when it was, maybe 8 years ago?  I was after a Vidal Sassoon Five Point Haircut – Sassoon also being a constant source of inspiration to me, plus other famous hairdressers such as Trevor Sorbie and Leonard of Mayfair. Richard introduced me to John, who cut the lot off in an instant which was immensely satisfying for us both. We quickly moved on together and the mischief began…

Does he cut and colour the hair, or just colour it? And where does this process usually take place?

John cuts and directs and Tracy Hayes is the colourist extraordinaire. The introduction to Tracy was quite a moment for me. I was ignorant even to the role or existence of a colourist. I have subsequently exploited this spectrum of choice. My hair’s been done in salons, at shoots at John’s home and at Zaha Hadid’s showroom. It travels well.

Is this a collaborative effort? How does it all come together?

It’s very much a collaborative effort. I troll the internet and libraries looking for an assortment of inspiration, and arrive with a few thoughts. John and Tracy then pick up the baton and take it somewhere else. It’s never 100% set in stone, even mid-session John might take another turn. It’s such fun. Even when I had a desire for looking knowingly pedestrian and was craving the worse amateur blonde tiger highlights, Tracy was completely game, and John took it into a 1980s rent boy world, which I never saw coming.

Do you see your hair as an extension of, or part of, your art?

I didn’t realise until recently that it’s unavoidable. I just respond to hair, it brings me immense pleasure to draw and observe. I work things out on my head aesthetically. I feel I can say where I’m going artistically. Although that all sounds like a load of old nonsense! It’s just shape and colour that I respond to and it’s what I’m into.

When you are out and about, what kinds of reactions do you get from the public to your most recent hairstyles?

That’s variable, depending on the location and whether I choose to observe or prefer to avoid eye contact and remain oblivious. If I’m up for looking it’s a mixed bag of reactions which range from curiosity, or pity and the occasional kindly stare. Monied areas are less sympathetic in general. Children are the best, of course, for a thorough engaging stare and always stating the obvious. Teenagers and tourists are the worst. They are the most fearful, I suppose.

Which hair products do you favour?

A conditioner is my best friend. I like that surfer-style brand, Aussie Miracle Moist Conditioner, because it makes me smile and smells nice.  I guess I’m not the target market, but they have an eternal 2 for the price of 1 deal. I also love Elnett hairspray. The smell, the hold, the can, the illustration on the can – excluding the Cheryl Cole moment, that is.

Are there any particular people around at the moment whose hair you find inspiring?

There is a local lady who has a sort of wonky hairpiece that towers on top of her head with a cascade of synthetic bouncing curls. It’s very precarious and makes for a great silhouette from any angle. Plus, I’m always deeply envious of anyone who can have a blunt cut, low slung fringe, sitting at eye level, creating mystery. My friend Jane Shepherd at Central Saint Martins has this. My beaky face does not allow for such a luxury.

Do you ever think, ‘I can’t be bothered today!’ and just wear a hat? 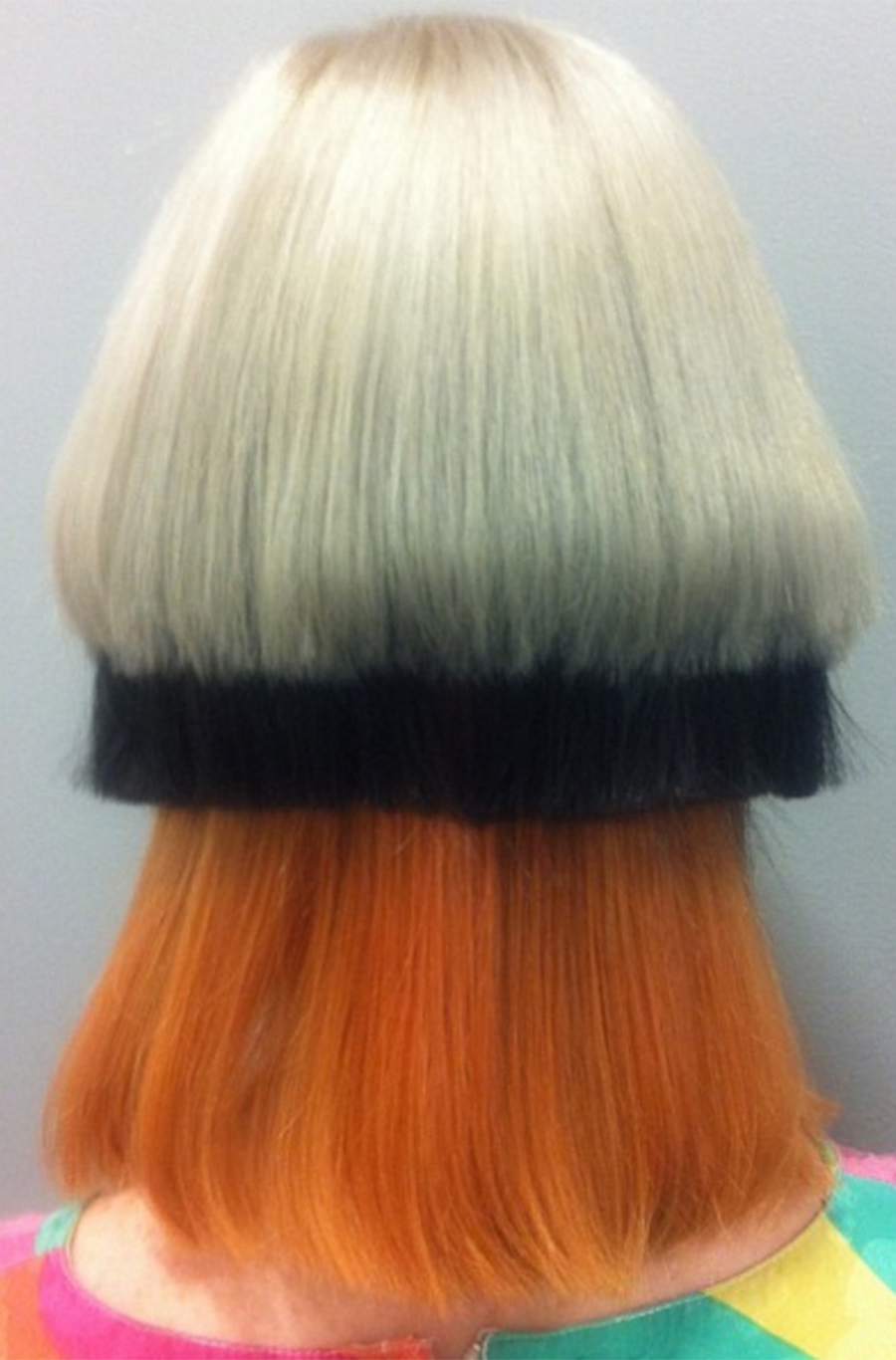